When Singapore had a dream 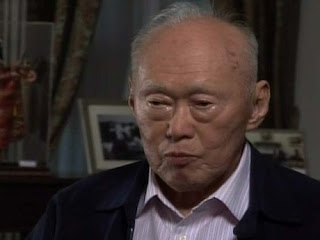 Unexpectedly, Lee Kuan Yew rose to speak. He insisted on making his way, somewhat unsteadily, to the rostrum, waving away the microphones that were brought to him.

Once there, he stood silently for a moment, gazing into the crowd gathered at the Istana.

He went on to talk about the book, "One Man's View Of The World", a collection of his thoughts on world affairs.

In an earlier interview, he had said his main reason for the book was to make this point: that the world does not remain static, and every society evolves - for better, or worse. Which way it goes depends on the choices its people make.

Uncharacteristically, he also confessed that he "had given up" trying to solve what he saw as the most pressing challenge facing the Republic--its declining birth rate, which remains stubbornly low despite his efforts over the years to give couples a nudge into having more babies.

The twin challenge of falling fertility and rising agedness was for a younger generation of leaders to figure out. Hopefully, they will find a way, he added wistfully.

Having encountered Lee over the years, as a reporter covering his political activities and overseas trips as well as assisting with his memoirs, I left the event last Tuesday a little forlorn.

No, it was not because of the frail state that the former prime minister seemed to be in. That was to be expected, given that he will turn 90 next month. Rather, it stemmed more from a sense of foreboding of the big challenges looming, which Lee and his book seem to allude to.

The year-long Our Singapore Conversation (OSC), which has just wrapped up, was an attempt to crystallise these challenges and fashion a response. It sought to draw out the hopes and fears of Singaporeans, and settle on a way forward that most could agree on.

After over 660 sessions in which nearly 50,000 people participated, what is the outcome? The committee has summed up its discussions under five broad headings: Opportunities, Purpose, Assurance, Spirit and Trust.

No doubt some will find this rather underwhelming, given the seeming lack of policy proposals, sacred cows slain, or road map to the future.

Perhaps anticipating this, Education Minister Heng Swee Keat, who helmed the committee, signalled in a major speech last Tuesday that policy shifts are in the offing, arising from the OSC process. He stopped short of giving details, pointing out that these will come soon enough when the prime minister delivers his National Day Rally next Sunday.

Last Thursday, prime minister Lee Hsien Loong also gave a glimpse of what he might be thinking when he said that the government would "play a bigger role to build a fair and just society", which will entail changes in housing, health-care and education policy.

Going by what has emerged so far, it would seem that his government has heard the cry for "assurance" from Singaporeans wanting to know that it is aware of their worries about the rising costs of housing and health care, congestion in the trains, buses and on the roads, as well as the stresses and strains in the school system and the need to keep access to opportunities fair and open to all. Many, however, will want to know just how it plans to address these issues.

Indeed, these day-to-day concerns were topmost on many minds during the OSC discussions, which seemed to centre on the here and now. The talk was largely on what Singaporeans want, or say they need, with relatively little attention given to what we as a society will have to do to realise those aspirations.

An observer looking on might be forgiven for concluding that Singaporeans have turned inwards, jealously guarding and endlessly stirring up a precious pot of curry. In contrast, external issues and events, from a rising China and rising sea levels from climate change to how rapid changes in technology might impact workers and industries here, seemed a world away.

This somewhat narrow focus of today's national conversation was noted in an article in The Straits Times last Wednesday by Dr Parag Khanna, a thoughtful Indian American who now lives in Singapore and often strikes me as being more upbeat and passionate about this city-state and its prospects than many Singaporeans.

Welcoming the efforts to tackle the short-term housing and transport woes highlighted in the OSC, he went on to argue that what was missing was a bold new Singaporean dream for the future.

His suggestion: Singapore should seize the opportunity to be the "capital of Asia".

"Nobody will bestow the title of capital of Asia on Singapore; it must seize it," wrote Dr Khanna, an adjunct professor at the Lee Kuan Yew School of Public Policy.

To do so, Singapore would have to embrace the responsibility of being a global city, he said. This entails keeping Singapore open to the world, and taking steps to build up the city's infrastructure so that it could cope well with the flow of people who will be drawn to an Asian hub city, even if this meant having a population of eight million people, he added.

I did a double-take when I read this. Given how politically toxic immigration has become in recent months, it took quite a bit of gumption for Khanna to articulate this view.

Yet, it is not such a new or radical idea. Rather, it is a longstanding ambition that Singaporeans have shared for years, of building an Asian metropolis on the island's mudflats, not as an end in itself, but as a means to a better life for themselves and their children.

That vision appears to have lost its lustre in recent years, in the face of the overly rapid influx of immigrants, which outstripped the pace of development of the city's infrastructure. It gave rise to popular resistance to any talk of allowing in more foreigners. In the process, alas, it also emboldened the little xenophobes among us.

With sufficient time, investment and resolve, the present physical bottlenecks in infrastructure are likely to be resolved. But the political roadblocks to keeping Singapore open, connected, and relevant to the world will remain a major challenge.

In his speech earlier last week, Heng cited the work of Harvard Professor Ronald Heifetz to note that some of the challenges Singapore faces are "technical" problems, which could be tackled by an appropriate policy response or deploying sufficient resources, such as building more flats or train lines.

But there are also deeper "adaptive challenges" which call for society to rethink its values and change attitudes in order to arrive at a new consensus on the way forward. In my view, the task of steering Singaporeans back to the goal of being an open, global city, is one such challenge.

Tackling these issues will require a deep sense of trust among leaders and people, Heng rightly noted. Yet, in today's world, trust is no longer just a matter of blind faith, with leaders playing on their track records or political brand names, in a "look how far we have come" fashion.

That no longer works. Rather, trust will be fostered only when people sense that they have been brought into the decision-making process, and more importantly, accept that their leaders are sufficiently apprised of their concerns and aspirations to figure out a way forward they are willing to support.

Perhaps this is why the OSC has stopped short of addressing the longer- term issues for now, seeing these as a task best taken up another time.

That might be politic. Still, at some point, Singaporeans will have to face up to these "adaptive" challenges. Unless we do, the perennial existentialist question for Singapore--namely how a little red dot stays relevant, survives and thrives in a world that is changing economically, geopolitically and technologically--will not be answered, and our prospects might well be constrained not so much by a paucity of resources, but a lack of imagination and resolve.

The Singapore story would turn out to be a tragedy if an earlier generation, who, despite the odds and limitations, harboured big hopes of building a bustling capital of Asia to help secure their children's future, came to find that this bold aspiration ran up against a constraint they never imagined--that their children would one day shrug it all off as a dream that was just not worth the effort to make happen, or even strive for after all. Straits Times