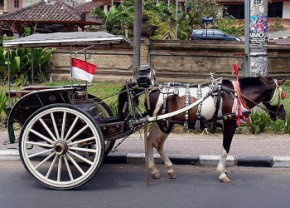 As has long been expected, Indonesia's economy appears to be hitting a wall, with rising inflation and interest rates, falling exports, a widening current account deficit and a depreciating currency.

Those concerns drove the benchmark Jakarta Composite Index down by 5.6 percent Monday, the biggest one-day decline in two years, then falling by another 1.03 percent on Wednesday to 4150.24, down from a record high of 5,214.976 on May 20 and closing in on bear market territory.

After having successfully navigated the 2008 global financial crisis with a minimum of damage, and producing plus 5 percent growth in the ensuing years as Western economies went into the tank, Indonesia's financial planners thought they had found the secret, believing a big domestic market and eager consumers – among the world's most optimistic, according to a Nielsen survey – would insulate them from a downturn. But the past months have shown the country to be as vulnerable as any other economy, and perhaps more so.

The picture is darkening because for far too long the government has ignored a wide variety of warning signs, including calls to raise interest rates as long as a year ago, and to rein in fuel subsidies long before they did. Concerns have been rising for more than two years about economic nationalism scaring away foreign investment due to a restrictive regulatory environment impacting everything from mineral exploration to beef imports. As the economy has started to cool, those concerns have come home to roost.

In May, Standard & Poors downgraded Indonesia's debt from positive to stable, citing the deteriorating external position and the slow pace of reform.

The country has also been wracked with allegations of political corruption in the ruling Democratic Party headed by President Susilo Bambang Yudhoyono, and there is rising uncertainty ahead of next year's national elections, in which SBY, as he is known, must be replaced. Last week, the head of the nation's oil and gas regulatory agency was arrested for bribery and there are rumors that the case could be tied to attempts to siphon off money to fund the Democrat's 2014 election drive.

These concerns are not new but they have been ignored by global investors as the economy has boiled along and the rest of the world looked dismal by comparison. But as problems have mounted, investors are starting to take note. On Monday, overseas investors accounted for 45 percent of trading on the Jakarta exchange by value, selling Rp1.78 trillion (US$170 million) more than they bought.

Last Friday, Bank Indonesia, the country's central bank, reported that the current account deficit had widened to a record US$9.8 billion, or 4.4 percent of GDP. The central bank cut its growth forecast to 6.3 percent in June from 6.8 percent and has now cut it again, to below 6 percent as GDP growth slowed to 5.81 percent in the second quarter of 2013.

Although the central bank has raised interest rates twice at its last two meetings to the highest level in four years, it is finding it increasingly difficult to rein in inflation, partly because it left the decision to raise rates too late, and especially because of the fuel price rise.

Part of the problem is that China, now Indonesia's biggest trading partner, has started to cool. Exports decreased to US$1.47 billion in June, down from US$1.61 billion in May. Major exports are coal and gas, which make up about 20 percent, followed by minerals and edible oils. Indonesia is the world's biggest producer of palm oil, which counts for a big share of employment, and which has been decreasing in price as the commodities cycle wanes.

The consumer price index is now up 8.61 percent year-on-year. Consumers, the main drivers of the economy, have reacted negatively. As early as May surveys show households starting to revise down their expectations about their incomes and the economy as the rising cost of goods reduced buying power. Bank Indonesia said that price pressures are expected to ease in coming months given that the Idul Fitri holiday at the end of Ramadan has passed and with it demand for everything from fuel for travel to food for family celebrations.

The consumer confidence index, based on a survey of 4,600 households in 18 major cities, fell 8.7 points to 108 in July, the lowest level in 14 months. The July drop was attributed to the higher fuel prices. Subsidized gasoline, branded as Premium, rose from Rp4,500 to Rp6,500 per liter while subsidized diesel went from Rp4,500 to Rp5,500, still below market price.

Although the weak rupiah might aid exporters, it is creating problems for importers and companies whose debt is denominated in US dollars. Those who rely on foreign inputs in manufacturing are taking a beating and will be forced to either eat the costs or pass them on to consumers, adding to inflationary pressures. Asia Sentinel