Australian travellers face greatest arrest risk in the US, higher chance of death in Thailand 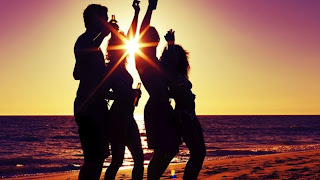 MILLIONS of Australians travel each year without even so much as a hitch, yet hundreds more wind up in hospital, in jail or in the worst case scenario - dead

But if you think it's just war-torn countries, sheer bad luck or a drunken night out in Bali that pose the greatest risk to intrepid Aussies, think again.

As it turns out, more Australians are in jail in the US than any other country and we face the greatest risk of dying while travelling through Thailand - at least if believe the statistics.

According to the Department of Foreign Affairs and Trade, 90 Australians were arrested or in jail in the US alone on December 31, 2012.

This group made up a total of 572 Australians who had been arrested or were in jail overseas on the same date in countries including China, Thailand, Indonesia and the United Arab Emirates.
And all up, the number of Aussies arrested overseas increased from 970 in 2007-2008 to 1181 in 2011-2012.

However it's not just the threat of jail tourists face.

Last year 111 Aussies died in Thailand, accounting for the largest number of deaths in one country, followed by The Philippines, 68, Greece, 50, and Indonesia 48 with 904 Aussies passing away all up.

And while tourists are advised against travelling to countries such as Afghanistan and Sudan, the figures show travellers can get into trouble in countries seen as relatively safe.

Other tourists find themselves in trouble for offences seen as harmless back in their own countries.

Here's a list of some of places where tourists have wound up going from having the holiday of a lifetime to the nightmare from hell.

Bali has around eight million visitors a year and is a popular destinations for Aussies, but has gained a dangerous reputation in recent years, not just because of drugs and cheap alcohol.

Information released by the Department of Foreign Affairs reveal an Australian dies in Bali every nine days with 39 Australians passing away last year.

Another 93 sought consular assistance after being taken to hospital, while 36 were arrested, and 18 jailed.