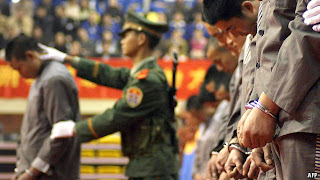 LAST year China is thought to have executed about 3,000 people, or roughly four times more than the rest of the world put together. It is a grim distinction

According to the Dui Hua Foundation, an American NGO that tracks these things, the 2012 figure is down from 12,000 people executed in 2002—a fall of three-quarters. In other words, though China remains the world’s chief executioner, it is also largely responsible for a marked worldwide fall in the number of executions.

The Communist Party considers the execution rate to be a state secret and has not even publicly noted the extent of this fall. But it has confirmed it indirectly. In 2012 a deputy minister of health cited the decline in executed prisoners as a reason for a shortage in organs available for transplant in China. Dui Hua’s estimates are thus the best figures available. Western scholars broadly agree with the numbers, behind which lies an intriguing tale of Chinese reformers working quietly for change.

Historically, the Chinese Communist Party has overseen horrendous violence. Though not on the scale of Stalin’s Soviet Union, this started with the purges of landlords and other “counter-revolutionaries” in the late 1940s and early 1950s. Mao Zedong coolly declared that “the killing of counter-revolutionaries should usually not exceed 0.1% of the population, and should be less than 0.1% in the cities.” Millions died in a few short years, as Chinese villages were encouraged to mete out their own punishment with the aim of creating a blessed “New China”.

Mao’s death in 1976 brought to an end the last spasm of violence in his name, the Cultural Revolution. Chinese leaders relaxed political control over people’s daily lives and encouraged economic change. But they enforced a rigid system of criminal justice in the name of maintaining social order. Capital punishment was to be for “extremely serious crimes”, a category that was open to broad interpretation but which included corruption and drug trafficking. Starting in 1983, the government launched regular “strike hard” anti-crime campaigns. Judges—many of them former soldiers without legal training—were ordered to be severe. In the first campaign 24,000 people were sentenced to death by firing squad in less than one year. As a result of similar drives in the 1990s, the country executed about 15,000 people a year, more than 90% of the world’s total. Public sentencing rallies, and occasionally public executions, took place.

One man began turning this culture round. Never a household name, Xiao Yang served as president of the Supreme People’s Court from 1998 to 2008. Exceptionally for that post, Mr Xiao was qualified, possessing a degree in law. Neither he nor a deputy at the court, Liu Jiachen, who helped him, can be counted as radicals. Rather, they wanted a more professional, accountable and methodical judiciary—especially in handling capital offences. Their urge to modernise found a growing base of support within the system. One of Mr Xiao’s professors at Beijing’s Renmin University in the 1960s, Gao Mingxuan, was an influential legal figure and, though viewed as a conservative, was an advocate of reducing executions. People who graduated from law school in the 1980s and 1990s—some of them avowed abolitionists as young scholars—were now up-and-coming officials, judges and court advisers.

Daniel Yu, a legal scholar who knew many in this group, says they were keenly aware of a global mood turning against the use of the death penalty. They were equally aware how much of an outlier China was. The country’s taste for execution had become a source of embarrassment.

That Mr Xiao and his deputies set out to limit executions became apparent to outsiders only years later. He could not argue the case for fewer executions before his political masters on the basis of concerns about China’s image abroad. Hardliners dismissed foreign complaints about human-rights violations; besides, the party was convinced of the need to “kill many” so as to keep order. And public opinion has long been for capital punishment.

According to Susan Trevaskes, author of “The Death Penalty in Contemporary China”, one of Mr Xiao’s schemes to reduce the number of executions was to encourage the wider use of suspended death sentences. He and other officials of the Supreme People’s Court sought to persuade judges to hand down such sentences in more cases of murder, drug trafficking and violent robbery. It marked a change of rhetoric. In 1983 officials urged that “when there is a choice to kill or not to kill, choose to kill”; in 2005 officials said courts must “kill fewer, kill cautiously”.

Ms Trevaskes argues that Mr Xiao was able to push this line because he could argue that it would boost the system’s legitimacy. “Killing many” had not worked to reduce crime, and could lead to challenges to authority. In small communities, where serious crimes often involved family members, resolving disputes through compensation and lesser punishments promised to reduce the risks of tensions spilling over. What is more, a bolder state media had begun to expose how police framed innocent people for drug trafficking and murders in order to claim rewards or appear efficient. The idea of innocent people being executed after wrongful convictions fed growing popular revulsion.

The harmonious way out

Mr Xiao also cleverly seized on the official rhetoric of Hu Jintao, the former president and party chief. In 2006 the official document defining Mr Hu’s ideology of a “harmonious society” called for “balancing leniency and severity”. This language went unnoticed by most, but the supreme court appropriated it into national policy.

In 2006 Mr Xiao won a change in the law that had profound consequences. In a country where local functionaries jealously guard their powers, he ensured that every capital case had to be reviewed by the highest court in Beijing. Mr Hu himself seems to have supported the move. The Supreme People’s Court added several hundred judges and constructed a new complex in Beijing to take on the task of reviewing so many cases. The impact was immediate. The number of death sentences was already slowly declining. But it plunged by 30% in the first year of court reviews; executions fell in turn, to about 5,000 in 2008. Plenty of cases were sent back for retrial.

Executions have declined further since, as the court has taken other measures to encourage the use of the suspended death penalty, including the publication of model cases to help guide lower courts about when they should impose the suspended sentence. On July 8th a former railways minister, Liu Zhijun, was given a suspended death sentence for corruption—though many Chinese commenting online deemed that too lenient. In 2011, in a largely symbolic step, China removed 13 crimes from the list of capital offences, including smuggling, tomb-robbing and stealing prehistoric fossils. It has also changed the method of execution in most cases from firing squad to lethal injection.

John Kamm, founder of the Dui Hua Foundation, calls the reduction in executions “the most significant positive development in the human rights situation in China in recent decades”. Yet legal-rights activists worry that the number of executions may not have much farther to fall. Party ideology unequivocally endorses capital punishment, and Mr Xiao and his allies did nothing to challenge it. Though executions are less common, the activists say, the judicial system still lacks any kind of independence and miscarriages of justice are still commonplace.

Teng Biao, a lawyer who helped form a group opposed to the death penalty, says he gets little public support for his cause, though people react to individual cases of perceived injustice. The recent execution of a businessman convicted of defrauding investors in Hunan province drew a public outcry when it emerged that his family had not been notified that the execution was about to take place.

Mr Teng and others argue that abuses of defendants’ rights are still widespread, and that defence lawyers are often prevented from properly representing their clients in capital cases. In their view China still kills thousands too many. It will, says Mr Teng, be at least another 50 years before China abolishes the death penalty. The Economist