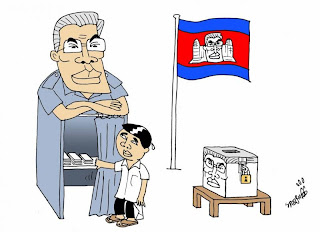 General elections were held in Cambodia on 28 July 2013.

The National Election Committee (NEC) announced that some 9.67 million Cambodians were eligible to cast their ballots to elect the 123-seat National Assembly.

The previous parliamentary elections in 2008 were won by the Cambodian People's Party, which managed to secure an absolute majority of the seats: 90 out of 123. Despite winning a parliamentary majority, the CPP chose to form a coalition with the royalist FUNCINPEC, which won 2 seats. The opposition Sam Rainsy Party and Human Rights Party won a combined total of 29 seats. In 2012, the two parties merged to form the Cambodian National Rescue Party.

However, party leader Sam Rainsy was barred from running as a candidate because he was not registered to vote.

The voter roll was finalised on 31 December 2012, at which time Rainsy was living abroad after being controversially convicted in 2010 of making changes to a map to suggest the country was losing land to neighbouring Vietnam.

Rainsy returned to Cambodia in July 2013 after he received a royal pardon from King Norodom Sihamoni,but Rainsy failed to have his name reinstated on the voter roll and was not eligible for candidacy in the election. From Wikipedia, the free encyclopedia