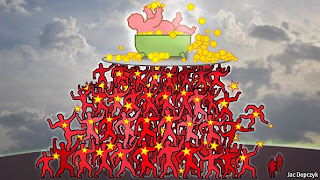 It’s time to set our clocks back in Asia. (ADXY) Not to 1997, as many are recommending, but to 1994
Memories of the former year remain raw. Currencies had gone into free fall and current-account deficits exploded. Central bankers and International Monetary Fund officials scurried to contain the chaos. It’s true that another 1997-like crisis is highly unlikely. Today, exchange rates are more flexible, foreign-currency debt is lower, banks are healthier, countries are sitting on trillions of dollars of reserves, and economies are far more transparent. The differences between 1997 and today trump the similarities.

The same can’t be said of 1994, the year the Federal Reserve last reminded the world that its monetary policy is decided in Washington, not Bangkok, Jakarta or Seoul. Then-Fed Chairman Alan Greenspan doubled benchmark interest rates over 12 months, causing hundreds of billions of dollars in bond-market losses and helping set the Asian financial crisis in motion. The dollar’s post-1994 rally made currency pegs impossible to maintain, leading to devastating devaluations across the region.

Asia’s real problem was hubris. All that hot money coursing in its direction in the 1990s made rapid growth too easy. Policy makers were too busy signing foreign-direct investment deals, attending ribbon-cutting ceremonies for factories and flashy skyscrapers, and congratulating themselves for surging stocks to do their real jobs. Financial systems went neglected, unproductive investments accumulated and cronyism ran wild.

A different kind of smugness has afflicted Asia in recent years. After the 2008 global crash, regional governments started believing their own press. They were convinced they had decoupled from the West. Bankers were abandoning New York and London for Hong Kong and Singapore. Asian debt had become a safe haven from turmoil in Europe. And, as China’s 1.3 billion people grew richer, the good times would keep rolling on.

Asia does indeed deserve a victory lap; the region has come a long way since 1997. But rapid growth and its unquestioned success in surviving the global meltdown has revived a hubris that policy makers need to own and analyze. The price of this cockiness is mounting as currencies in Indonesia, Thailand and elsewhere suddenly seem toxic to investors. India is in chaos at a time when China’s growth trajectory is more uncertain than it has been in 15 years.

Asian governments need to face up to realities. Perhaps they can live without American and European consumers for four or five years, but thriving beyond that requires more buoyant and self-supporting domestic economies. Also, if you are going to hitch your fortunes to another economy -- say, China’s -- it would be better not to choose a developing one whose growth model may have run its course. The test, as it was in 1994, will be what Asia does now to modernize its economies.

Examples of complacency are all too easy to find. In Indonesia, President Susilo Bambang Yudhoyono seems to have forgotten that political stability only goes so far if corruption and inefficiency remain rampant. In Thailand, Prime Minister Yingluck Shinawatra has been too busy tweaking the constitution to notice a potentially disastrous bubble in household debt. In the Philippines, President Benigno Aquino forgot that 7.8 percent growth only matters if you create lots of jobs. In Malaysia, Prime Minister Najib Razak has been too focused on trying to shore up his political position to tend to a current account that is swinging toward deficit.

“While the U.S. has been given a free pass on the twin deficit issue, emerging-market countries will not be so lucky,” says Simon Grose-Hodge, head of investment strategy for South Asia at LGT Group in Singapore.

Take India, which has been acting as though its rise to superpower status was inevitable, no matter what the government did (or, more important, didn’t do). Reforms have stalled, while unaffordable government handouts have proliferated. And with an election due in nine months, no one expects that the hard decisions needed to get the economy back on track will be taken. There’s great excitement that respected economist Raghuram Rajan will soon helm the Reserve Bank of India. But the nation’s problems -- which include a government as bereft of ideas is it is flush with corruption and inefficiency -- are largely beyond his control.

Things are far from hopeless for Asia. Among the reasons 2013 is not 1997 is Japan. (TPX) Back then, Japan’s shaky banking system held about $100 billion worth of loans to the five Asian economies hardest hit in 1997. When Japanese bankers pulled the plug, the crisis reached a fever pitch. Today, Japan Inc. is healthier, the government is shoring up the economy, and the central bank stands ready to add new liquidity as the Fed’s tapering process begins.

Chinese leaders are also likely to pull out all the stops to keep growth above 7 percent. In fact, as the Fed ends its quantitative-easing program and credit markets tighten, cash-rich China may act to fill the void as a way of upping its regional prestige and power.

Yet as markets crack anew, Asia should remember the years it squandered between 1994 and 1997. There are all too many similarities to the last few years, a period during which Asia should have been reducing vulnerabilities -- not basking in its headlines. (William Pesek is a Bloomberg View columnist.)