Vietnam and China: A Dangerous Incident 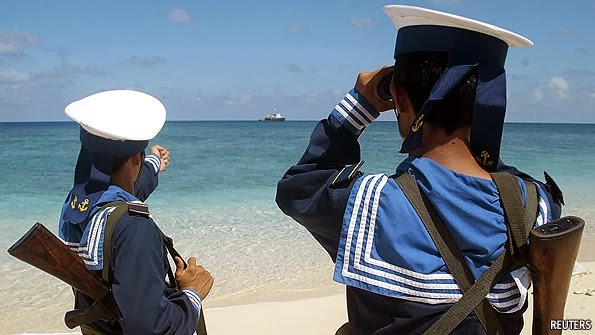 In early January 2014, video of a recent CCTV4 documentary “Blue Frontiers Guard” appeared online, providing a detailed history of the China Marine Surveillance (CMS) spanning from roughly 2007 up until the present. The documentary, in Chinese with English subtitles, begins with footage of an incident that occurred on June 30, 2007 between various government vessels from Vietnam and China in the disputed waters off the Paracel islands in the South China Sea. The incident, having previously gone largely unreported, is covered in tremendous detail, providing a new frame of reference for analyzing wider debates over Chinese assertiveness and the U.S. “rebalance” to the region. In addition, the video also provides a number of new insights into organizations such as CMS and its parent organization, the State Oceanic Administration (SOA), including the tactics and command and control arrangements of their vessels when out at sea.

The 2007 incident apparently resulted from an attempt by a China National Petroleum Corporation (CNPC) survey vessel to conduct what the documentary termed “normal operations” in the waters off the Western Paracel islands beginning on June 26 of that year. Such operations are seen as anything but normal by the Vietnamese, who continue to claim the islands despite China having forcefully occupied them since 1974. Hanoi dispatched a fleet consisting largely of naval auxiliary vessels to prevent the Chinese from surveying the waters. A tense standoff ensued, culminating in reckless maneuvers by Chinese CMS vessels that led to a number of serious collisions, threatening the safety of all crews.

The Vietnamese vessels initially expelled the CNPC survey vessel from the area, and the China State Oceanic Administration (SOA) responded by promptly organizing a “rights safeguarding and law enforcement” campaign, dubbed Enforcement Action Code 626. According to the documentary, such operations exist outside the scope of regular enforcement patrols, and in addition to CMS ships already in the vicinity, SOA dispatched CMS vessels numbered 83 and 51 to the area as part of the campaign. They arrived on June 29 and formed up in “alert order,” with two ships both fore and aft on either side of the CNPC vessel, attempting to escort it back into the area for the second time.

After failing to verbally persuade the Vietnamese vessels to leave the area and allow the survey to commence, the CMS vessels first initiated a protective cordon around the CNPC ship, then began to initiate a number of offensive naval maneuvers. These maneuvers began at the lower end of the spectrum with shouldering, but subsequently escalated to direct bow to bridge ramming after the Vietnamese naval auxiliary vessel DN 29 broke through the cordon. The offensive actions were undertaken on direct orders from the CMS higher command at SOA, who commanded the captains of the vessels to intentionally initiate collisions with the Vietnamese ships. According to the Deputy Director General of SOA’s South China Sea Bureau, he and other commanding officials were “stressed” over the risk to their own crews’ safety, but nevertheless “asked them to hit other vessels.” Such offensive maneuvers are considered by senior leadership at SOA to be more effective as they preempt possible aggressive maneuvers by the other side. The same SOA official is quoted in the video as stating that “based on our years long operational experience, it is much easier to attack than to defend.” These comments serve as a strong indication that at least some ranking SOA officials have a preference for preemptive action, and that the organization itself, now in charge of the restructured China Coast Guard, could be promoting an offensive operational doctrine.

Rather than rogue or overzealous captains misinterpreting vague guidance, this incident provides conclusive evidence that the impetus for the collisions originated with very specific orders from the upper levels of the organization’s central leadership back on the Chinese mainland. The captains of the CMS vessels view such tactics as tools accessible to them, but only use them following orders from their higher command. As the captain of CMS vessel number 84 states in the video: “as long as the commander gives an order, be it hitting, ramming, or crashing, we will perform our duty resolutely.”

The tactics used in this incident are reminiscent of encounters that took place at sea between the U.S. and USSR in the early years of the Cold War. Recent encounters between the American and Chinese navies elsewhere in the South China Sea, such as that involving the USS Cowpens in December, bring such parallels into stark contrast. While some commentators stressed the role of the activities undertaken by the Cowpens in causing the incident, the 2007 incident off the Paracels begs the question of whether or not the Chinese People’s Liberation Army-Navy (PLAN) shares the same operational doctrine as its ostensibly civilian counterpart. The Cowpens incident reportedly involved the use of similar tactics, with a Chinese amphibious ship shouldering the U.S. destroyer after it was asked but failed to leave the area, eventually leading to a near collision between the two vessels. That there would be doctrinal overlap between the PLAN and SOA is a distinct possibility, with the two organizations continuing to strengthen already close ties as part of plans outlined at a recent annual meeting held between their senior officials.

The CCTV4 documentary is remarkable not only for the level of detail it provides on collisions that occurred in 2007 as a result of Cold War-era tactics, but also because it provides this information in a tone that seemingly condones and even endorses such actions. In addition to comments from SOA officials discussing the “glorious end” to the confrontation, the narrator in the documentary describes it as a “grand battle,” of which the outcome is apparently regarded as successful. The Chinese leadership has reportedly viewed similar incidents as having been settled in China’s favor, including the 2012 standoff at Scarborough Shoal, and may even have begun reformulating a maritime strategy based on the “Scarborough Model.” Yet the CCTV documentary suggests that the “Scarborough Model” is by no means new, and that the operational concept of using civilian maritime law enforcement vessels to conduct maritime “rights safeguarding” or “rights protection” campaigns has quite possibly been in the works for some time, since at least 2007.

These insights also illuminate an important point in the wider debate over what has been referred to as a more assertive or even aggressive Chinese foreign policy, and its relationship to the “pivot” or “rebalancing” policy undertaken by the Obama administration. Despite the initial signs of this newly assertive foreign policy often being traced to the 2009-2010 period, China had already begun as early as 2007 to undertake a series of provocative actions that seemed designed to assert greater authority and jurisdiction over its claims in the South China Sea. The resulting confrontation described above indicates that Chinese assertiveness not only predated the rebalance, but the Obama administration itself.