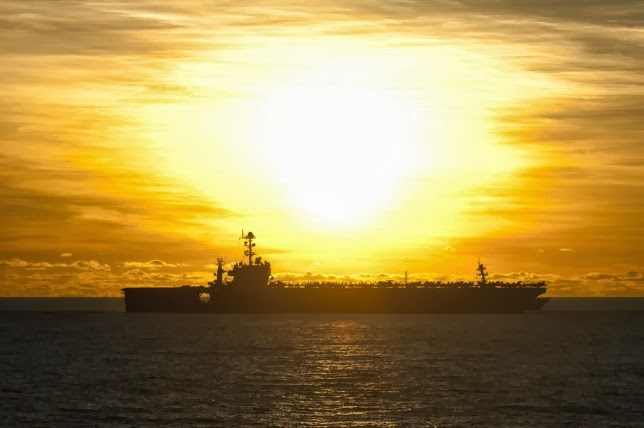 For some time now, it has been fashionable to say that we have begun what will be a “Pacific Century.” We have seen a flood of books of late, variations on the theme of When China Rules the World, as one put it. Certainly, in the aftermath of the 2008-09 financial crisis and Great Recession, this has been the conventional wisdom, a view shaped to a large extent by linear thinking. One of the most celebrated proponents of such views is the prolific former Singapore diplomat Kishore Mahbubani, who has written a series of well received books on Asia’s rise such as The New Asian Hemisphere.

In a recent article, Mahbubani has taken this linear logic to new heights (or depths, depending on your perspective) with the premise that America’s slide to number two economic status is “inevitable by 2019.” His premise appears to be that the prospect of yielding the top spot to China appears horrible and unnatural in the collective U.S. psyche:

In 2019, barely five years away, the world will pass one of its most significant historical milestones. For the first time in 200 years, a non-western power, China, will become the number-one economy in purchasing power parity (PPP) terms… it will take longer for China’s economy to overtake America’s in nominal terms but the trend line is irresistible.

Certainly the global diffusion of power is an ongoing trend. And at $12 trillion in 2012, China’s GDP in PPP terms was at 75 percent of the U.S. level, though as most economists know, statistical precision and Chinese data don’t make easy bedfellows. But the argument that America will yield its place to China in very short order bears further scrutiny.

Even if China’s GDP does surpass that of the U.S. in PPP metrics, it says little about the quality of the economy. China’s economy is still heavily investment driven, has a fragile financial system, is SOE-dominated, and innovation-challenged (quick, how many Chinese brands can you think of?) Linear thinking also overlooks the difficult reforms China faces, which could see growth over the next five years tapering to perhaps close to America’s pace – say, 4-5 percent – with the U.S. potentially reaching the 3 percent range. For good measure, remember the BRICS (Brazil, Russia, India, China, South Africa), a catchy, but always contrived notion of emerging markets. Apart from China, none will have growth reaching 2 percent this year.

Nor does straight line extrapolation recognize a huge risk factor: a heavily indebted formal and informal banking sector, or the commercial real estate bubble. Industrial innovation is anything but static: the new American shale revolution spurring signs of a re-industrialization can, and probably will, reduce China’s advantages as an exporting, platform economy. The coming five years will see China in a very difficult process of trying to implement market-driven reforms in an economy that has become increasingly dependent on its state sector, on pump-priming investment rather than innovation and increased productivity.

In fact, many economists would see China as a good candidate to be pulled into the middle income trap, as are a number of Asian emerging economies from India to Thailand (while backtracking on democratization) to Malaysia and perhaps Vietnam and Indonesia.

Second, what do the absolute numbers mean? Does a type of statistical determinism ordain the world to stand on its head once China’s economy has generated a dollar more than America’s in either PPP or real terms?

Being rich alone – as past experience, notably Japan’s in the late 1980s, amply reveals – doesn’t guarantee anything. Does a bigger economy magically grant China an upgrade in all other instruments of national power: military, political, soft power?

Third, and flawed as it is, the U.S. leads a rules-based system with built-in restraints favoring both its interests and the interests of those who, like Singapore, adroitly play the global trading system. What set of rules might China put in place once its economy meets the magical moment of having one more buck than America’s? Implicit in the China as #1 school is a core question: is anyone looking forward to a shift to the flexi-rules of guanxi (personal patronage networks) on which China so obviously relies?

Instead of an up/down zero-sum world, power and influence have other, vastly more subtle metrics. Since the new century, the U.S. has been adjusting – gradually, inconsistently and erratically, but adjusting nonetheless – to a world in which power grows ever more diffused, Whether in embracing the G-20 or Asian multilateral fora, the United States has been accommodating change. Obama has suffered much grief for the unfortunate term, “leading from behind.” This isn’t a world of absolutes, but more one of primus inter pares.

Lastly, has the steadily accruing wealth and capital account ledger entries won China more friends and accomplices? Where are its allies? Just like China, and other emerging powers, many will also wish to continue their free-riding on the U.S.-maintained system, whether or not their GDP numbers equal or surpass America’s.

Kishore writes that, “very sadly, China’s emergence is taking place at a moment of great political paralysis and disunity in the American body politic.” But the U.S. political class is keenly aware of China’s re-emergence; indeed, the shift to China of manufacturing from industrial hubs in the U.S. and elsewhere has a mobilizing effect on political opinion. As of course does the $1.3 trillion China holds in U.S. Treasury bonds.

At the root of widespread “China No. 1” thinking lies some basic confusion. In his recent article, for example, Kishore writes in deceptively stark terms:

No American administration has sought “complete freedom to do whatever [the U.S.] wants to do.” Since the Second World War, it has largely written and tried to enforce rules with built-in restraints – with some notable superpower transgressions (think 2nd Iraq war), sometimes ultimately at its cost. And consider this: what other great power has espoused policies – notably, free trade – which enriched potential rivals and brought down America’s relative predominance?

Whether by design or effect, U.S. leadership has embraced relative decline since the Second World War. It preferred a world of a prosperous Europe and Japan (and later China) with a growing middle class, which buys U.S. goods and services and has a growing stake in the rules-based order from which it benefited hugely. Of course, each has sought to maximize the options – and this usually involved a wish to moderate free-riding by sharing risk. No GDP dollar tripwire exists to trigger a spoiler’s strategy. As Herodotus wrote 2,500 years ago, the fortunes of city states as well as great powers wax and wane over the centuries: “he who was once great shall be humbled.” But the dynamic cuts both ways.

By irredentist, nationalist policies towards its neighbors seeking to redress historic grievances, Beijing has managed to evoke a latent anti-China coalition stretching from India to Vietnam and Japan, a result which doesn’t usually figure as augmenting national power but quite the reverse. It is a country with two experiences throughout history: strong center or fissiparous provinces at war with one another. The legitimacy of the central government looks increasingly threadbare. We wouldn’t bet on there being anything “inevitable” about Chinese supremacy, especially if we look at it by the numbers, let alone in five short years.

James Clad is a former Deputy Assistant Secretary of Defense; Robert A. Manning is a senior Fellow at the Atlantic Council’s Brent Scowcroft Center for International Security and formerly served on the State Dept. Policy Planning staff and National Intelligence Council (NIC). Both served in the George W. Bush administration.