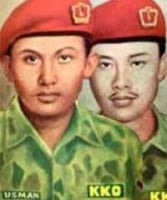 A plan to build a statue of Usman and Harun — two Indonesian(so-called) heroes who are considered terrorists in Singapore — in Batam, Indonesia’s closest island to the neighboring city state, is not only unnecessary but also childish and arrogant.

It’s unnecessary because Singapore seems to have ceased to comment on Indonesia’s decision to name its naval vessel after the two men responsible for the fatal 1965 bombing of an office tower in Singapore after President Susilo Bambang Yudhoyono made it clear he would not change the name of the ship.

Singapore and Indonesia seem to have found an exit strategy that will leave the matter for what it is without causing humiliation: The ship will be operating in the eastern part of Indonesia, while Singapore has issued a statement that it would not allow the ship to pass through its waters.

But the Batam plan is also childish and arrogant because it will be used only to mock our neighbors. While our diplomats have worked hard to erase the perception that Indonesia has been using its size to force others in the region to act in accordance with its wishes, the plan to build the statue by any standard is mere bullying.

People should stop provoking further tension between Indonesia and Singapore, for instance by erecting a Usman-Harun statue in Batam. The recent tensions have proven to be a complete waste of energy — energy that could have been more fruitfully used for mutually beneficial activities. Indonesia and Singapore have a lot to lose if the already strained relations deteriorate any further.

Local authorities in Batam and Riau Island province as well as the central government in Jakarta should therefore stop talking about this statue and also stop using the Usman-Harun controversy as a political tool to gain sympathy a few months before the elections.

MY COMMENT. ‘When the bodies were flown back to Jakarta there was an eerie silence along Jakarta’s main thoroughfares from Kemayoran Airport to Kalibata Cemetary. I was then serving as the Assistant Air Attache/Australian Embassy Interpreter and stood on Jalan Thamrin observing the passing motorcade carrying the corpses. The then Jakarta Governor Ali Sadikin added to the unrest by stating ‘if Bapak Soeharto gives the word I will lead an attack on Singapore in retaliation for the hanging of our heroes...’. Indonesians should be aware that these two men were not dressed in uniform, wore civilian clothes and placed a huge bomb on the ground floor of the building in Singapore which housed the Australian High Commission.

The ground floor was occupied by a foreign bank.

These were not heroes. They were cowardly bastards who killed civilians’