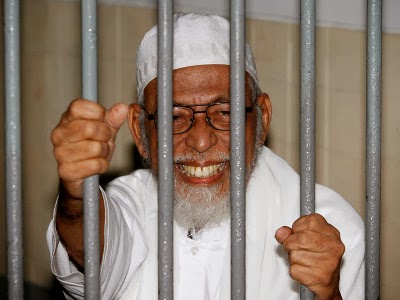 It’s nicer on the outside

On April 14, 2003, Abu Bakar Bashir, who is widely considered to be the godfather of jihadi violence in Indonesia, was formally charged by the Indonesian government with treason and a spate of other offenses relating to the 2000 bombings of Christian churches that killed 18 people

Thought also to have been complicit in the 2002 bombing of a Bali nightclub that killed 202 people, he was absolved of the treason charges but was sentenced to three years in prison on immigration violations. That sentence was subsequently reduced to 20 months. It was the first of a seemingly endless series of not guilty verdicts, lenient sentences and reductions that allowed Bashir to return to the street.

It is interesting to recount his history in terms of the furor generated in Indonesian political circles earlier this week when, as expected, a Bali court released convicted drug mule Shapelle Corby on parole after serving nine years of a 13-year sentence. Corby was convicted of smuggling 4.2 kilograms of marijuana into Bali in 2004 in a boogie board bag.

That was two years after the Bali nightclub bombing that took the lives of 88 Australians, 38 Indonesians, 27 Britons, 7 Americans and 6 Swedes. Another 240 people were injured. Three members of Jemaah Islamiyah, a violent Islamist group widely believed to have been the brainchild of Bashir, were eventually sentenced to death over the bombing.

On Monday, when Corby was released on parole, politicians were furious, denouncing what they called a travesty of the criminal justice system. The anger over the 36-year-old Corby’s conditional release ‑ she must spend another two years in Bali before she can leave the country ‑ at least partly stems from the continuing bad blood between Indonesia and Australia over a variety of issues including Prime Minister Tony Abbott’s decision to turn back boat people who sail from Indonesian waters in their attempt to land on Australian soil and an ongoing flap over Australian wiretapping of Indonesian leaders.

But there was plenty of bluster to go around over Corby, who is a media celebrity in Australia and is often portrayed as a victim of the Indonesia system. Widespread reports that she stands to make more than a million dollars for her life story surely added to the rancor as did the circus of Australian television reporters who covered her release as if it was a major news event.
Aboe Bakar Al Habsy, a member of the House of Representatives from the Prosperous Justice Party (PKS), said Tuesday that lawmakers might demand an official explanation from the government on an issue of national importance – Corby’s release.

Aboe Bakar told local media that permitting the woman’s release was a major government mistake and sent the wrong message about Indonesia’s campaign to crack down on drug offenses.

House Deputy Speaker Pramono Anung said the “international lobbying” in recent years by Australia to get Corby released “was plainly visible and undeniable.”

“We feel that this decision fell far short of the public’s sense of justice,” he told local media. “The government has been duplicitous about this.”

Contrast that with the lenient treatment of Bashir and others. The 75-year-old cleric is not the only jihadi who received basically a slap on the wrist for terrorism charges. In 2011, for instance, a district court gave three to six-month sentences to 12 leaders of a mob that attacked members of the Ahmadiyah sect, an Islamic splinter group, beat three of them to death and nearly hacked off the arm of one of the sect members who tried to stop them. The wounded man, Deden Sujana, was ruled at fault and got six months in jail; his attackers were released for time served.

But Bashir was the most notorious and his ability to escape long prison sentences was near miraculous. The US Department of State has charged that his semi-underground Islamic group, Jemaah Ansharut Tauhid, was responsible for multiple coordinated attacks against innocent civilians, police and military police. He remains on international terrorism lists. After each of his releases, he was allowed to celebrate, using his free time to set up still more fronts for alleged terrorism. His smiling face greeted TV viewers on a daily basis

In 2004, Bashir was arrested again and charged with involvement in a 2003 bomb attack on the Marriott Hotel in Jakarta that killed 14 people. He was sentenced to two and a half years in prison on conspiracy charges but that sentence was cut by four and a half months in 2005. In 2006, his conviction was overturned by the Supreme Court despite the fact that he remained on the United Nations list of international terrorists.

On Dec. 21, 2006, Bashir's conviction was overturned by Indonesia's Supreme Court. In 2010, his luck ran out and he was arrested for involvement in funding a terrorist training camp in Aceh, a charge that carried the death penalty. He was sentenced to 15 years in prison in 2011 only to have the Jakarta High Court cut his sentence to nine years. Amid public outrage, the Supreme Court annulled the sentence and finally reinstated the 15 years.
Bashir is still in jail. But one wonders for how long. Asia Sentinel