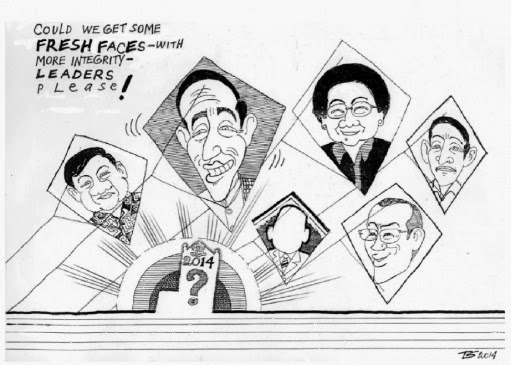 President Susilo Bambang Yudhoyono (SBY) and presidential hopeful Lt. Gen. (ret.) Prabowo, the chief patron of the Great Indonesia Movement (Gerindra) Party, may appear on affable terms but they will never be friends

Their recent meeting at the State Palace may at some point prove that Yudhoyono is embracing Prabowo and vice versa, but behind the scenes things may be different.

According to a member of Yudhoyono’s inner-circle, the President holds no grudges against other presidential hopefuls, including his archrival and former president Megawati Soekarnoputri, who he defeated in the 2004 and 2009 elections.

But when it comes to Prabowo, the mood, according to the Cabinet member, is utterly different.

“He [Yudhoyono] seems happy with the possible presidential nomination of figures outside his Democratic Party [PD], such as [Jakarta Governor] Joko “Jokowi” Widodo, [Golkar Party chairman] Aburizal Bakrie and even Megawati,” said the official.

“His only concern, or I may say fear, is Prabowo. I don’t know whether it’s related to their past, but Yudhoyono told me Prabowo was unfit to rule and described him as ‘unstable’ and ‘unpredictable’.”

Yudhoyono could know Prabowo well as they were in the same Army cadet class in the early 1970s. Their relations during military service were cordial but not close, with Prabowo mostly engaged on the battlefields of Indonesia’s separatist conflicts, while Yudhoyono spent most of his career either as an instructor, speechwriter or military thinker.

Since Yudhoyono assumed power in 2004, Prabowo rarely publicly threw mud at his classmate and has never been in staunch opposition to Yudhoyono.

Although the President may be aware of the risks should Prabowo become president in 2014, he has never attempted to halt Prabowo’s ambitions. This is probably because Yudhoyono has expected Prabowo do not have the slightest chance of being nominated president.

The Presidential Election Law requires all political parties to obtain a minimum 25 percent of the popular vote or 20 percent of seats in the House of Representatives to be entitled to nominate a presidential candidate.

Pollsters have forecast that Prabowo’s five-year-old party, Gerindra, which secured 4.5 percent of the vote in 2009, is unlikely to garner more than 10 percent in 2014. Gerindra’s chances of forging a coalition to meet the threshold are likely to be slim.

Yudhoyono’s PD, which is widely forecast by pollsters to secure less than 10 percent in 2014, will surely attempt to nominate its own candidate who must obviously have a close link to the First Family.

But there are discussions within the PD that if its vote turns out to be smaller than that of Golkar, Yudhoyono will opt to throw his support behind Golkar on the condition his brother-in-law, former Army Chief of Staff General (ret.) Pramono Edhie Wibowo, is ensured a role as Aburizal’s running mate.

Golkar, which seems to have no chance of backing away from nominating Aburizal, is predicted to secure between 12 and 15 percent of the vote.

The Indonesian Democratic Party of Struggle (PDI-P) will definitely nominate either Jokowi or Megawati based on the optimism it will win the election by garnering between 18 and 20 percent of the vote.

While the prospect of joining the “big three” is slim, Gerindra may turn to the smaller parties, but that will prove difficult.

The United Development Party (PPP), forecast to be the largest Muslim-based party in 2014 with more than 5 percent of the vote, will have reservations about giving its support to Prabowo given the irreconcilable personal bitterness of PPP chairman Suryadharma Ali toward Prabowo.

The other remaining Muslim-based parties such as the National Mandate Party (PAN) and the National Awakening Party (PKB), estimated by pollsters of each gaining less than 4 percent, are deemed too loyal to Yudhoyono.

Only the Prosperous Justice Party (PKS) will have the chance to join forces with Gerindra, but the Muslim-based party is unlikely to get more than 5 percent of the vote, according to pollsters.

This will leave Gerindra short of meeting the threshold.

New parties such as the National Democrat Party (Nasdem), which tends to lean toward the PDI-P, and the Indonesian Justice and Unity Party (PKPI), are forecast to book less than 2 percent.

While the calculation seems to keep Prabowo at bay, the landscape unexpectedly changed last month after speculation that the graft-ridden Constitutional Court would scrap the threshold.

The court is expected to deliver its verdict soon after a request filed by political communications expert Effendi Ghazali. Support for the revocation received a boost after the Crescent Star Party (PBB) chief patron Yusril Ihza Mahendra logged a similar request only weeks after the election of Hamdan Zoelva as the court’s new chief justice. Hamdan is former PBB lawmaker and a former employee of Yusril.

Many believe the court will use the verdict to retaliate against Yudhoyono’s move to reform it after the KPK arrested the court’s then chief justice Akil Mochtar in October for allegedly accepting kickbacks.

Should the threshold be scrapped, Prabowo will undoubtedly be the prime beneficiary.

His chance of winning the presidency will be even bigger if Megawati finally refuses to nominate Jokowi, whom pollsters believe is the only figure capable of fighting Prabowo in the race for the presidency.

Yudhoyono’s separate meetings with Prabowo and Yusril on Christmas Eve suggest, to some extent, fear in the President’s camp over Prabowo’s prospects. While all refuse to disclose the real reason behind the meetings, it is difficult to rebuff claims that the meetings had nothing to do with the upcoming verdict of the Constitutional Court. Jakarta Post.