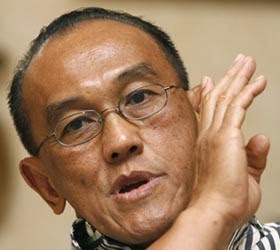 Under SBY, Indonesia has boosted its international presence.

What will his successor do?

After nearly ten years in office, President Susilo Bambang Yudhoyono (widely known as SBY) will hand power this July to an elected successor in competitive multi-party elections. His efforts to consolidate Indonesia’s democracy and expand its economy have yielded tangible gains across a variety of measures, with much more room to improve. His mark on Indonesian foreign policy, while rooted in nonalignment and pragmatism, has been noteworthy for its willingness to address values of democracy and human rights head-on. What will this legacy mean for Indonesia’s potential as a leader for other societies, particularly from the Muslim world?

Indonesia’s first directly elected president, SBY came to power in 2004 with more than 60 percent of the vote; in 2009, he won re-election in the first round by a similarly wide margin. After a tumultuous transition following the 1998 downfall of the despot President Suharto, the relative success of these two elections, and the country’s acceptance of the results, propelled Indonesia’s rapid transformation into a flourishing democracy and economic dynamo with a rapidly expanding middle class. Now, with SBY unable to seek a third term due to constitutionally mandated term limits, the race is on to succeed him.

Several figures have emerged at the forefront. Abdul Rizal Bakrie, head of a successful business conglomerate, is the leading candidate for the Golkar Party, the ruling party during General Suharto’s 32-year reign. Prabowo Subianto, a former Special Forces commander under Suharto who ran unsuccessfully for vice president in 2009, heads the Gerindra Party ticket. Joko Widodo, the current governor of the capital city Jakarta, is most favored to become the next president according to nationwide polls.

Unlike Bakrie and Prabowo, Jokowi (as he is known), is a relatively new politician who made his name in the post-Suharto era. He has a reputation for being an honest politician with a can-do attitude, detached from the old political guard embodied by Bakrie and Prabowo. Although he is a favorite to win, it remains unclear whether he will run if his party’s leader, former President Megawati Sukarnoputri, chooses to make another claim for the presidency. As the campaign heats up, one thing is certain: most of the presidential hopefuls will focus on tackling domestic issues such as improving infrastructure and curbing corruption. During the past year, SBY’s Democratic Party has been marred by corruption scandals and his political image has taken a hit.

While his domestic policy agenda may now be in jeopardy, it seems that SBY’s foreign policy legacy will largely remain unscathed as his term comes to an end. Much credit should be given to his administration for guiding Indonesia to economic prosperity and international prominence in the last ten years. He has worked to expand Indonesia’s clout on the international stage mainly through its active leadership of the Association of Southeast Asian Nations (ASEAN) and closer cooperation with India, Australia and China. SBY’s administration has been eager to share its experiences on democratic transition with other leaders of aspiring democracies, including Myanmar and Egypt, and hosts an annual Asia-Pacific forum on democracy designed to lend legitimacy to a political reform agenda. SBY also has chosen gradually to increase Indonesia’s international profile by taking part in the G-20 summits and co-chairing the UN Secretary General’s 27-member High Level Panel on the Post-2015 (Millennium Development Goals) Development Agenda.  Although this strategy has elevated Indonesia’s standing in the international spotlight, doubts on its rise as an influential global player persist, as SBY’s administration has avoided major commitments that would compromise its historic preference for neutrality and non-interference.

To understand Indonesia’s current foreign policy behavior, one must delve into its recent history. Just like politicians in the United States who channel its founding fathers, Indonesian leaders look to their independence heroes for inspiration. After gaining independence in 1945, Indonesia’s first president—Sukarno—pursued a “free and active” foreign policy strategy. The strategy entailed protecting its own national interests, not aligning with major world powers (i.e. the Soviet Union and the United States), and forming strong bonds with other non-aligned countries such as India.

During this period, Indonesia became one of the leading members of the Non-Aligned Movement, which grew out of the group’s founding conference hosted by Indonesia in Bandung in 1955. After General Suharto came to power (1967-98), however, Indonesia kept a lower international profile and cultivated close relations with Washington and other Western economic powers in order to develop its economy.

What we see in Indonesia’s current foreign policy stance is a blending of these two strategies. It is engaging with the international milieu of both major and minor powers, but still holding back on making significant commitments that could challenge its preference of remaining relatively neutral in international disputes. In a country obsessed with Facebook and other social media, SBY used his 2009 inaugural address to describe the strategic outlook of Indonesia’s current foreign policy this way:

“Indonesia is facing a strategic environment where no country perceives Indonesia as an enemy and there is no country which Indonesia considers an enemy. Thus Indonesia can exercise its foreign policy freely in all directions, having a million friends and zero enemies.”

For Indonesia, having “a million friends and zero enemies” does much to help sustain its impressive growth in foreign trade and investment. It also helps explain its reluctance to take hard human rights positions that might upset major economic partners that have poor human rights records, such as China. Furthermore, Indonesia is generally timid in making strong commitments to uphold human rights at the international level because it continues to struggle with its own human rights issues. Recently, for example, Indonesia has seen a significant uptick in religious intolerance and government infringement on civil rights and liberties. As the Muslim world’s largest democracy, such troubling internal human rights issues pose a real threat to the credibility of its leaders’ claim to be a beacon of democracy for other fragile democracies.

Indonesia’s longstanding preference for non-intervention and opposition to external attempts to meddle in others’ internal affairs align conveniently with its desire to avoid international criticism of its own domestic agenda. This is one motivation behind Indonesia’s failure to ratify the Rome Statute of the International Criminal Court (ICC). Amid calls from the DPR (House of Representatives) to ratify the Statute, Defense Minister Purnomo Yusgiantoro stated:
“We’ve already got a law on human rights, a law on human rights tribunals and the Constitution, all of which govern the rights and responsibilities of all citizens. All of them cover the issue of human rights. So even without ratifying [the Rome Statute], we’re already complying with the principles enshrined in it.”

Although Indonesia is generally complying with the Rome Statute, it has not officially ratified it for fear of compromising its independence to handle sensitive issues on its own. Ratifying the statute could open Indonesia to unwanted attention by the ICC and limit its options if crimes against humanity were to occur within its borders. While Indonesia is not high on anyone’s list for ICC scrutiny, religious intolerance is growing (most notably the destruction of homes belonging to the Shias of the Sampang Regency at the hands of their Sunni neighbors), and a culture of impunity prevails amongst the country’s security forces. Its elite counterterrorism unit—Densus 88—has been implicated in killings of suspected terrorists and last March, members of Kopassus—the Indonesian Special Forces—stormed Cebongan prison and executed four detainees suspected of murdering a Kopassus sergeant.

Efforts to seek justice for the atrocities in East Timor bore no fruit. A makeshift human rights court set up by Indonesia and the UN Special Panels in East Timor tried 18 individuals for abuses committed during 1999, but all were acquitted. The CAVR, which ran from February 2002 to October 2005, accused Wiranto, Chief of the Armed Forces during 1998-99, of being complicit in the abuses committed in East Timor. The Serious Crimes Unit—a prosecutorial body within the UN Mission in East Timor—issued a warrant for Gen. (ret) Wiranto’s arrest in 2004, but the East Timorese government never forwarded it to Interpol. East Timor’s leaders have opted for a reconciliatory approach with Indonesia, rather than seeking punishment. Former East Timor President Jose Ramos-Horta spoke on the issue in 2006: By Ted Piccone and Bimo Yusman for ‘The Diplomat’