Plight of the sex worker in Singapore 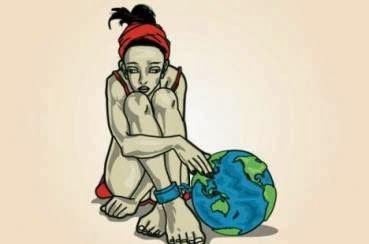 Sex trafficking is not likely to be stamped out completely in Singpaore, especially with the high number of foreign workers here and the demand created by local men. Still, efforts should not be spared in curbing the trade

One way is to get across the tales of suffering of the many women forced to undertake such dehumanising work. Here is where an independent study of sex trafficking victims comes in useful.

It sheds light on the shadowy sex trade here, providing a glimpse of the women's living and working conditions. Of the 87 trafficking victims interviewed for the study, all said they were denied decent food and living conditions, which led to feelings of lethargy, depression and fatigue.
They had to pay off debts, and their passports were withheld. Especially heinous is when some were forced to have unprotected sex. This exposed both the sex workers and their clients to sexually transmitted diseases and HIV. In 2012, there were 469 HIV cases in Singapore. Of these, 457 acquired the infection through sex, with heterosexual transmission accounting for 47 per cent of infections.

Yet all a man sees when he picks up a sex worker is a woman in a sexy mini dress, eager to please. He is unaware of, or unconcerned about, her plight. The wildly popular 1990 movie Pretty Woman, starring Julia Roberts, did sex trafficking victims a great disservice, by glamorising the prostitute. A fantasy of the "happy hooker" has been created. But prostitutes lead a miserable life, mistreated by pimps and clients alike.

More cases of underage sex workers have also surfaced in the past couple of years. They are often beaten and drugged before being brought here to work as prostitutes. And they can be made to serve as many as 150 clients in two weeks, the duration allowed on a tourist visa.

Thus, the full weight of the law should be brought to bear on pimps who bring in underage girls and the men who use their services. The Straits Times/ANN, Singapore | Editorial