Submarines in Southeast Asia: Proliferation, Not a Race 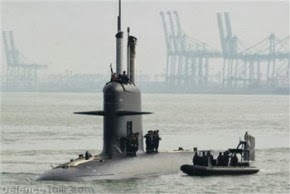 ASEAN countries are looking to bolster their submarine fleets, but this is not an arms race

In early January this year, Vietnam formally joined the Southeast Asian “submarine club” with its first Russian-built Kilo-class submarine christened the Hanoi. Not too long ago, Jakarta expressed interest in acquiring the same model of submarines from Russia or more boats from South Korea, ostensibly to augment the incoming new fleet of three SS-209 boats purchased from South Korea back in August 2012. Just recently in November 2013, Singapore contracted German shipbuilder ThyssenKrupp to develop the Type-218SG, the first of two boats slated to enter service in 2020.

Other Southeast Asian countries have evinced interest in acquiring an undersea warfighting capability, but were prevented from doing so largely because of budgetary constraints. In the case of Thailand, even though no submarines were bought after the German offer of second-hand Type-206A boats lapsed in March 2012, the Royal Thai Navy has reportedly constructed submarine basing support and training facilities in anticipation of future acquisitions. The Philippine Navy has been eyeing submarines but for now, decided to prioritize the use of limited funds to beef up surface and naval aviation forces, with anti-submarine warfare capabilities tipped as the next major focus to substitute for a submarine capability.

A “Submarine Race” in Southeast Asia?

This recent spate of submarine acquisitions being implemented or planned has characterized Southeast Asian naval modernization efforts to date, which could lead to observers highlighting the revival of a “submarine race” in the region after the bout of submarine purchases made in the 1990s to early-2000s. A superficial survey of open remarks by the region’s defense and naval planners seemed to allude to this. For example, Indonesian Defense Minister Purnomo Yusgiantoro reportedly remarked that the submarine purchase, among other defense equipment, is designed to signal Jakarta’s commitment towards Indonesian defense modernization so that “we can keep up with ASEAN members.” Bangkok referred to the submarine programs of neighboring Southeast Asian navies when it emphasized the need for submarines as part of the country’s naval capabilities.

However, technical and geopolitical indications point to neither the existence of a “submarine race” nor the prospective emergence of such a phenomenon in the foreseeable future. Any negative effects of submarine proliferation in Southeast Asia appear to be at least counterbalanced by rising trends of regional cooperation in the submarine field.

While there are evident efforts among regional submarine operators to look beyond a mere “fleet-in-being” force to create a more effective and sustainable force to guard their national waters, there are no indications of a rapid expansion of submarine forces. The Vietnamese submarine force will number six boats by 2016 while the Indonesians will muster three new submarines around the same time, whereas the existing pair of West German-built Type-209s will most likely be decommissioned. With the progressive phasing out of the ageing Challenger-class boats by then, Singapore will most likely have just two Archer-class submarines in service before the first Type-218SG is inducted. In short, the number of submarines in service throughout Southeast Asia will remain more or less stable within the next decade, with new boats supplanting old ones for existing submarine users while any expansion will take place over a significant span of time, primarily dependent on the countries’ economic health.

There is also no indication of a qualitative submarine race. When Singapore became the first Southeast Asian navy to introduce submarines with the air-independent propulsion (AIP), designed to prolong the underwater endurance of conventional submarines with reduced need for snorkeling, the consequent submarine buys of the other regional navies did not include that capability in response. The only area where there is some “catching up with the Joneses” has been submerged-launch anti-ship missiles. The Royal Malaysian Navy’s Scorpene-class submarines touted the region’s first such capability in the form of SM-39 Exocet, followed by Vietnam with the Klub-S, while Indonesia’s intent to purchase Kilo boats from Russia is intricately linked to a similar capability. In fact, new conventional submarines on the global market are typically offered with submerged-launch anti-ship missiles as an optional part of the entire sales package. This is an international trend in contemporary proliferation of submarine technologies, by no means unique to Southeast Asia. Navies in the Northeast and South Asian sub-regions have in fact long possessed such a capability.

Submarine-launched cruisemissiles (SLCM) for land attack purposes, however, represent a wholly different ballgame. Such weapons are potentially destabilizing, especially when launched from a platform as stealthy as a submarine, since they can project offensive firepower at standoff ranges deep into another country’s territory. It is noteworthy that whereas other major navies in the region have either acquired or explored the SLCM option, at present no Southeast Asian navy is seriously considering this capability. Another point is that none of the ASEAN member states is partner to the Missile Technology Control Regime, which restricts proliferation of missiles (and associated technologies) with a 500-kilogram payload out to a minimum range of 300 kilometers.

It is not yet ascertained whether the Kilo boats, which Indonesia is reportedly keen to purchase, will be armed with SLCM, such as the Klub-S land-attack variant. Scant information has emerged thus far regarding the capabilities of the Type-218SG. Nevertheless, SLCM is unlikely to appear on the future wish-lists of Southeast Asian navies unless serious evolution of geopolitical circumstances compels the introduction of such a weapon into the region. For now and the foreseeable future, AIP and submerged-launch anti-ship missiles constitute key submarine capability patterns in Southeast AsiaThe Geopolitical Underpinnings

Perhaps more crucial is that a “submarine race” – embodying the classical, arms-tension spiral consequences – emerging within a political void looks unlikely. The geopolitical environment in Southeast Asia has never been as benign as it has over the past decade or so. The region was once fraught with maritime territorial and sovereignty disputes, but since the early 2000s, Southeast Asian countries have amicably resolved most of the pressing maritime disputes through international law proceedings. The Sipadan and Ligitan Islands and the Pedra Branca islet disputes are examples. Maritime boundary issues are also addressed bilaterally, for instance the agreement reached in 2011 between Indonesia and Vietnam to jointly determine common fishing corridors in their overlapping exclusive economic zones (EEZs). Bilateral technical working groups continue to discuss outstanding maritime boundary issues, as seen in the case of Indonesia and Singapore in the Singapore Strait, and between Malaysia and Singapore concerning the post-2008 International Court of Justice verdict on the Pedra Branca. The various General Border Committees established back in the early years of ASEAN continue to be active in addressing common bilateral border issues, including areas of territorial contention and EEZ jurisdictional problems.

Since the last reported naval incident in the disputed Ambalat offshore oil block in the Sulawesi Sea between the Indonesian and Malaysian naval patrols in 2009, there had been no other reported instances of close encounters among Southeast Asian navies in disputed maritime zones. This tranquil situation looks set to persist, especially given that the Association of Southeast Asian Nations (ASEAN) has reiterated in recent years its commitment towards a community, a geopolitical construct that envisions refrain from the threat or use of force against fellow ASEAN member states. Moreover, in the context of regional uncertainties arising from ongoing geopolitical problems, for instance disputes in the East and South China Seas, ASEAN strives to retain its relevance as the driver of the regional security architecture. The threat or use of force among ASEAN member states would be regarded as antithetical to this objective.
Rising Trends of Concord Over Discord

While submarines feature prominently within the overall scheme of Southeast Asian naval modernization efforts, often overlooked is the recent intensification of cooperation among regional navies. Indonesia and Singapore established a submarine rescue and cooperation agreement back in 2012, followed by an equivalent pact between Singapore and Vietnam in 2013. These bilateral efforts augment existing multilateral arrangements in the region, such as Exercise Pacific Reach – a multinational submarine rescue exercise since 2000 – and the Asia-Pacific Submarine Conference (APSC) which first began in 2001 as a platform designed to promote cooperation and mutual trust among submarine operators and aspiring ones in the Pacific and Indian Ocean regions. Considering the operationally sensitive nature of submarine operations, these gradual, incremental steps are noteworthy. They can facilitate the creation of wider multilateral participation and institutionalized cooperative arrangements in the future, modelling on foreign examples such as the NATO Submarine Escape and Rescue Working Group (SMERWG).

With more submarine operators entering the scene, which means more submarines roaming the waters of Southeast Asia, the risk of underwater accidents is also multiplied. This calls for a further conceptualization of regional submarine rescue cooperation.

Because submarine operations are much more hazardous for naval servicemen, a rescue capability is necessary. The recent mishap revolving around the Indian Navy submarine INS Sindhurakshak highlighted the necessity of a submarine rescue capability which is, however, expensive to obtain, operate and maintain. Rudimentary submarine rescue capabilities, such as a basic diving bell lowered by the rescue vessel onto the submarine escape hatch, are limited by sea conditions and depth. Modern submarine rescue techniques encompass the use of more robust equipment such as a mobile diving bell, or more commonly deep-submergence rescue vehicles (DSRVs) – essentially mini-submarines designed to mate with the submarine in distress and transport submariners to the rescue ship. DSRVs and their operations are more complex to handle than diving bells. The entire package – the “mother ship” and its DSRV payload, trained personnel and supporting infrastructure altogether – may entail costs beyond the reach of many regional navies’ budgets.

Because of the persistent interest in submarines, in no small part influenced by the outstanding requirements to fill envisaged capacity shortfalls, submarines look set to remain on the wish-lists of various Southeast Asian navies. This proliferation pattern will continue in the foreseeable future. But to label this as a “submarine race,” in view of the technical and geopolitical trends observed so far in Southeast Asia as well as evident growth in inter-navy submarine rescue cooperation, may be a mischaracterization of what is more likely a concerted drive by Southeast Asian navies to achieve balanced naval force capabilities.