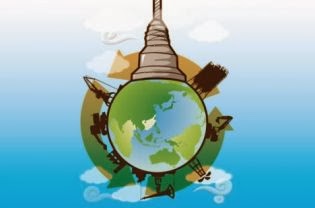 Integrating with the global market place was once Indonesia’s offensive strategic choice to accelerate economic reform and development. The country has benefited significantly from opening up to trade and investment.

It responded without hesitation to plummeting revenues from oil exports in the early 1980s with sweeping reforms to reduce tariffs, non-tariff barriers, red tape in customs clearance and procedures for obtaining business permits. These reforms spurred the expansion of light-manufacturing industries and helped the economy reach a steady rate of per capita real income growth of 5 per cent per annum until the Asian Financial Crisis in 1997.

Alongside domestic reforms, Indonesia was a champion of economic integration and openness on the international stage. In the 1990s, Indonesia led APEC’s Bogor Goals declaration and its leadership also helped create the ASEAN Free Trade Agreement in 1995. As a member of the G20 process, host for the 2011 ASEAN Summit and recent host of the 2013 APEC Summit,
Indonesia has supported old and introduced new initiatives for economic cooperation, especially in regard to connectivity and infrastructure. Indonesia is also one of the main advocates of the Regional Comprehensive Economic Partnership agreement, one of the most ambitious trade liberalisation vehicles currently being negotiated in Asia.

Yet today there seems to be growing caution towards greater economic integration. In recent years regulatory and incentives regimes have become more domestically oriented. Although Indonesia’s average import tariff is relatively low at around 7 percent, many imports are subject to new administrative requirements like pre-customs inspections and various permits. The services sector has not become more open to foreign direct investment (FDI) since 2003, with several areas remaining restricted to foreign participation.

Strict cabotage rules limiting the ability of foreign providers to service Indonesian domestic sea lanes, combined with restrictions on FDI in ports, warehousing, and freight forwarding, mean Indonesia’s logistics sector is less exposed to competition than its main regional competitors. And with the ASEAN Economic Community to be fully implemented in 2015, there is now pressure on the government to protect domestic businesses and impose new restrictive measures on trade and FDI.

The sentiments behind these policies are understandable. Indonesia wants an equitable industrialization process led by Indonesian entrepreneurs. The Indonesian economy is also sensitive to its current account deficit, which gives the impression that its industrial structure is too thin and dependent on imported goods and services. The trade balance is vulnerable to commodity price shocks as more than half of its export value comes from commodities and natural resources, whereas imports are mainly of capital goods and intermediate products.

Indonesia needs to continue facilitating industrialisation to move out employment that is currently concentrated in low productive activities. Some argue that Indonesia should address these issues with less exposure to international markets.

But these concerns are best addressed by pursuing structural reform and taking advantage of further integration with the global economy. Indonesia needs to generate business opportunities to absorb at least 2 million new workers annually and position the economy to escape the middle-income trap.

This requires the economy to exceed the current growth trend of 6 per cent per year, which will be difficult given the prevailing employment growth rate and total factor productivity, and may require doubling investment growth. Given that Indonesia’s gap between savings and investment is already substantial and widening, the additional investment will have to come from an increase in annual FDI inflow from its relatively low current value of 2 percent of GDP.

Rather than pursuing import substitution to slowly develop a complete manufacturing base at home, Indonesia should participate more extensively in regional and global manufacturing chains. This would allow Indonesia to accelerate industrialization by taking advantage of natural resource wealth, having FDI pay for capital in the form of factories off-shored to Indonesia and leaving the nation free to focus on investing its own resources in human capital and programs to facilitate local industries climbing up the value chain where the value added is greater.

More openness could also substantially enhance productivity growth. A 2007 study by Mary Amiti and Jozef Konings found that a 10 percentage point fall in import tariffs on intermediate goods led to an average 11 percent improvement in productivity for Indonesian firms that used those imports as inputs, thanks largely to lower costs.

Some domestic companies may indeed be unable to withstand global competition or benefit from further integration. However, it would be preferable for industrial policy not to protect the inefficient practices of such businesses but to help them address their core constraints and improve competitiveness.

A key issue in this regard is Indonesia’s relatively low public spending on infrastructure and the high cost of doing business. Indonesia must do more to reduce the cost of domestic freight, improve access to energy sources and reduce bureaucracy and regulatory uncertainties so that businesses can adjust rapidly to new opportunities. More competition in backbone and bottlenecked services such as domestic sea freight, broadband communication and energy distribution would help Indonesian businesses be more cost competitive. There is also room for intervention to improve workers’ skills and the capacity of local businesses to innovate.

Indonesia must regain its confidence in economic openness and international integration. Exposure to international economic forces can be difficult to manage at times but is critical for Indonesia to escape the middle-income trap.

(Sjamsu Rahardja is Senior Economist at the World Bank office in Indonesia. This appeared in the East Asia Forum)