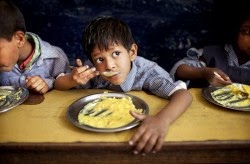 Nearly two and a half centuries ago Marie Antoinette, on hearing the French people were short of bread, supposedly said: ‘Let them eat cake’. It was a callous remark, and became a symbol of the French aristocracy’s isolation from the people they governed, a schism that shortly thereafter descended into the brutality and violence of the French Revolution. Antoinette was also known for her lavish spending, to the point of being known as Madame Déficit, further underscoring the differences between the classes.

Many would see a parallel with Malaysia’s current situation, as a rising cost of living squeezes real incomes while the government pursues an agenda of deficit reduction and fiscal consolidation. That agenda has seen subsidy cuts across many essential items (beginning with petrol and electricity) identified by the new Fiscal Policy Committee (FPC), which was formed last year to coordinate and plot the overall direction of Malaysia’s fiscal health.

The situation that the FPC had to deal with was more acute than has been generally recognised. While government revenue and spending were both somewhat above budget projections, leading to the perception of a fiscally irresponsible government, nominal GDP growth had been in sharp decline since the end of 2012, and only began to recover in the second half of 2013. Hence, even if the government hit its 2013 deficit target in absolute terms, the debt-to-GDP ratio would have exceeded the administration’s line in the sand of 55 per cent by the end of the year.

That realisation caused some hard and hasty decisions to be made, the biggest of which was the 20 sen per litre (US$0.06) reduction in petrol subsidies, but also extended to a review of electricity tariff rates, toll road rates and other lesser subsidies. In addition, it was confirmed during the tabling of the 2014 government budget that the goods and services tax system would be introduced in 2015 at a higher-than-expected rate, replacing the antiquated sales and services tax.

From an economic and fiscal perspective these are all defensible moves, and there’s no question that implementing them would immensely improve the government’s financial position and the competitiveness of the economy. In fact, preliminary numbers indicate the government achieved a surplus in the last quarter of 2013, preserving the 55 per cent debt limit. The issuance of government debt securities in 2013 is also coming in below initial projections. While there is still a long way ahead in closing the budget gap, positive steps towards that goal have been taken.

However, from a political economy perspective, the impact of multiple price revisions within a very short timeframe has eroded support for the government. The perception is that price inflation will impact the lower-income groups the most, as essentials make up a bigger portion of their expenditure. The increase in cash assistance programs that the government began in 2011 only partly offsets the increase in household costs and taxation. Moreover, the implementation of the petrol subsidy cut was somewhat botched, leading to the impression that the government hadn’t thought it through. The result has been a restless populace and consumer inflation that is likely to exceed 3.0 per cent in the very near future, compared with just 1.2 per cent at the end of 2012.

So where now from here?

From a policy angle, there’s little to complain about. The government is keeping to its commitment towards fiscal consolidation, building fiscal space to deal with potential future crises and generally putting government finances on a more solid footing. Household incomes are rising fast enough to deal with the acceleration in price increases — for the moment. The economy is benefitting from higher private and public investment, and should be given a further boost from the improvement in the external economic environment.

However, there is a growing trust deficit with the administration and a gap in communicating government policies to the people. The necessity for hard decisions has not been explained fully or clearly, especially as the Malaysian populace has become increasingly plugged into non-traditional communications channels. Whatever good intentions and sound policy the administration may have are lost in this disconnect.

Again, there are parallels with history. Marie Antoinette never actually said the words that were attributed to her; some historians believe they were uttered by another French queen generations before her time. She may have been profligate with public funds, but much of that money also went towards charitable works, and by all accounts she was truly sensitive to the needs of the people. The vilification of Marie Antoinette occurred because she was an easy target as a foreign princess and through her status as queen, not because of her true character or actions; it was as a symbol that she was brought to the guillotine.

That’s a tragedy, and a mistake, that shouldn’t be repeated.

Nurhisham Hussein is an economist based in Malaysia.