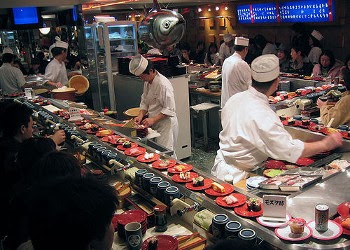 The prime minister’s program doesn’t work for everybody

Prime Minister Shinzo Abe’s new economic policy, dubbed “Abenomics,” has been generally considered a success in the first year in which it was implemented. But, as in other endeavors, there are winners and losers.

The winners so far are Japan’s big exporters, which have benefitted hugely from the weakening yen, having lost about 20 percent of its value against the dollar in the past year. Even such trouble-prone electronics companies as Sony have been able to eke out a small profit due to the yen’s devaluation. People who have invested in stocks have also scored. But there are losers, and one of them is conveyor belt sushi, which ironically was one of the few Japanese industries that thrived during Japan’s decades-long period of stagnation and deflation.

So far, relatively little of the economic benefits of Abenomics have trickled down to the average working man, and thus industries like revolving sushi that are dependent on consumers are suffering in the wake of flat demand and the soaring costs of imported ingredients due to the weakening yen and increasing global competition for fish.

In a conveyor belt restaurant the customer sits at a brightly lit counter as the sushi glides by, two pieces of fish on rice to a plate. No words are necessary. You see what you like and reach out and grab it. You pay based on the number of plates that you accumulate.

Conveyor belt sushi was actually invented in 1958 by Yoshiake Shiraishi (Ironically the same year that another great Japanese food innovator, Ando Momofuko, invented instant ramen noodles). Supposedly he got the inspiration for moveable belts of sushi by watching beer bottles moving on a conveyor belt at a brewery. It was introduced to the world at the 1970 Osaka World’s Fair.

However, it really got started in the 1990s and beyond. At first it was seen as a kind of gimmick. How could it compete with established sushi restaurants, which often charged US$100 or more for a sushi meal? It was like McDonald’s competing with a Kansas City steakhouse. But before long they were responsible for a third of all sushi sales in Japan.

It fit in with the times. The extravagant years of the Bubble Economy, which ended in the1989 crash, had given way to more frugal times. Diners tightened spending, patronage of regular restaurants slumped, bankruptcies in the food trade exploded. The conveyor-belt sushi shops were a good deal in the times. They charged only about ¥100 (about a dollar) per plate.

But the profit margins of about ¥5 (5 cents) per plate are very slim, and the revolving sushi restaurants are being squeezed more and more. All sushi establishments rely heavily on imported ingredients, which make their businesses extremely susceptible to the weakening yen and increasing competition for fish abroad. Imported ingredient costs account for about 70 percent of the cost of running a sushi shop, more than other restaurants, like noodle shops, which can more easily source ingredients in Japan.

For example, the wholesale price for Norwegian salmon, the most popular, ingredient in the chain restaurants, has risen by nearly 50 percent in recent years; whitefish shrimp from Southeast Asia also costs about 40 percent more. Increasingly, the chain owners scour the world for fish, even in danger zones as off the Somali coast or new markets such as Myanmar.

Being heavily dependent on consumers and sensitive to state of the economy, the conveyor belt sushi business will face another hurdle in a few months when the national sales tax goes from 5 percent to 8 per cent in April and 10 percent in 2015. Many in Japan worry that the imposition of this consumer tax might thrust Japan back into a recession, even if only of short duration.

The revolving sushi market is also nearing saturation. The big five companies now have about 4,000 outlets in Japan, mostly in the suburbs. But patronage has been declining at all of them, including the onetime market leader, Akindo Sushiro, and the third-ranked Kura.

The industry is fighting back through many tried and true methods, such as cutting prices to lure customers back into the restaurants. One of the larger chains, Kappa Create, has experimented with lowering prices to ¥88 per plate on weekdays. While it may have attracted customers, it didn’t do much for the bottom line. Kappa reported losing ¥2.2 billion in 2012.

Another sign of shakeup in a troubled industry is a trend toward mergers and consolidation among the handful of Japanese companies that own sushi restaurants. Recently, Kappa Create, operator of the Kappa Sushi chain and the second largest player in the market, acquired the fifth-ranked Genki Sushi, aiming for economies of scale. A European investor group also bought into industry leader Akindo Sushiro.

The chains are innovating, experimenting with new ways to gauge consumer preferences and using touch panels for ordering in a continuing quest to reduce the number of employees. Of course, no waiters are needed for conveyor belt sushi but Kura has gone father by eliminating the need even for the restaurant manager, running the restaurant remotely. Robots are employed to cook and mold the rice.

They are also taking fast food technology to new heights. Unlike other fast-foot restaurants, which eliminate crockery, the revolving sushi shops still have to collect plates, count and wash them. Some new Kura restaurants have customers place the plates in a kind of side pocket that automatically tabulates and washes the dishes.

But what the industry needs more than anything is for Abenomics to succeed. More than many other industries in Japan the revolving sushi industry is betting that the fruits of Prime Minister Shinzo Abe’s experiment ultimately trickle down to ordinary Japanese in the form of higher wages and that they will spend more money on going out to eat. ‘Asia Senitnel’