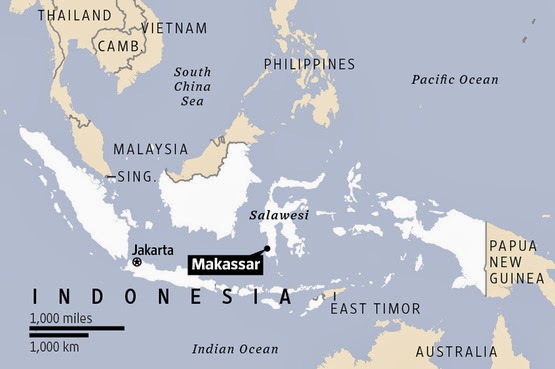 Indonesia has become embroiled in maritime disputes with neighbors like Singapore, Australia, and Papua New Guinea.

Indonesia has had a rocky couple of weeks in its relations with its neighbors. While Ted Piccone and Bimo Yusman wrote last week about Indonesia’s decade of qualified diplomatic successes, in a series of separate and mostly unrelated naval developments the archipelagic nation has in turn aggrieved, or been aggrieved by, Singapore, Papua New Guinea, and Australia.

Singapore
In the first incident, the Indonesian Navy sparked a row with Singapore after it announced it was renaming the final of three refitted frigates it purchased from Britain the KRI Usman Harun, in honor of Usman Ali and Harun Said. The pair of Indonesian marines conducted the 1965 bombing of MacDonald House in Singapore, killing three and wounding another 33, part of then-President Sukarno’s Konfrontasi—a violent effort to destabilize the formation of Malaysia, of which Singapore was then a part.

After their subsequent execution three years later in Singapore, Usman and Harun were in Indonesia memorialized as martyrs, prisoners of war wrongly killed, receiving a state funeral in the Kalibata Heroes Cemetery in South Jakarta and inspiring the sacking of the Singaporean embassy. Relations remained frosty between the two countries for the next five years until restoration of formal ties following a state visit from Prime Minister Lee Kuan Yew, who sprinkled flowers on the marines’ graves in a highly symbolic act for the Javanese.

Indonesia’s defense chief stated the decision to rename the vessels was made in December 2012, but only widely publicized this month, stressing the vessel’s name will not be changed. Indonesia’s President Susilo Bambang Yudhoyono, or SBY, has himself cautioned Singapore about reacting “proportionally” to the naming.

Many Singaporeans understandably view the pair, who disregarded their orders to bomb an electric plant and infiltrated the city in civilian clothes, in a slightly different light. While other things throughout Indonesia have or are planned to be named after the marines, in the words of a Singaporean, naming a warship after them is particularly onerous.

Singapore’s foreign minister has expressed concerns over the issue with his Indonesian counterpart. The row has already led the rescinding of mid-level military-to-military engagement between officers of the two nations at this year’s Singapore Airshow, leading Indonesia to pull out all of its brass.

While Singapore’s defense minister did on Tuesday ban the frigate from calling in Singapore, it is not true that Singapore’s Prime Minister Lee unfriended SBY on Facebook and untagged him in joint photos over the matter. Reporting of the acts in Singapore’s version of The Onion apparently tripped up a few Indonesian outlets, which carried the story as fact.

As voices in both Singapore, Indonesia, and Malaysia have called on Indonesia to reconsider, officials in the Indonesian government have at least initially taken the opposite approach—arguing that Singapore should not “represent as terrorists” its heroes and that “the risks of overreacting are too high.”  At the same time, Indonesia has tried to downplay the decision’s potential to upset relations. The real risk is that Indonesia fails to understand the culturally insensitive signals the ship sends and needlessly alienates a regional ally.

Should the frigate still bear their names when it arrives in Indonesia in June, a further row could arise, especially if it ever transits the straits of Malacca or Singapore. For while the ship can be banned from port it can’t be kept from transit passage through the straits, or innocent passage through Singapore’s territorial waters under the precedents of international law and the U.N. Convention on the Law of the Sea. If Indonesia was really surprised by the negative reaction, one hopes it will take pains to avoid a repeat.

Papua New Guinea
In the second crisis, reports surfaced last week in Indonesia’s media of an incident at sea on February 6 involving an Indonesian civilian speed boat and a Papua New Guinean (PNG) military patrol near the two nations’ shared southern border off the island of New Guinea. Ten fishermen from the Indonesian city of Merauke, Papua province, were en route to Kadawa village in PNG when they were reportedly intercepted by three speed boats manned by the PNG military, forced at gunpoint to anchor, robbed, and then made to swim ashore as the patrol burned the vessel. Five of the fishermen did not make it to shore alive.

In response, the Jakarta Post reports that the Indonesian East Fleet has stepped up its naval presence, increasing the marines available for fast-boat patrols from the Merauke naval base and dispatching a frigate, the KRI Abdul Halim Perdanakusumah (355) to search the vicinity for the missing men.

Indonesia’s local authorities contend that the passengers had their immigration papers checked in Indonesia prior to crossing the border, and voiced their anger with the PNG officials for its handling of the matter. “If there are any violations, they cannot simply burn the speedboat right away and tell the passengers to swim ashore,” a spokesman for the Papua Police is quoted as stating.

Indonesian representatives have demanded an explanation from PNG, and asked for help in the search and permission for Indonesian teams to conduct the search in PNG territorial waters. It is unclear whether such help or agreements will materialize, but local officials stated their reluctance to involve those who “are responsible.” For its part, PNG’s Foreign Affairs Minister, Rimbink Pato, confirmed a security patrol near the shared southern border at the time. While stating the incident had yet to be independently verified, Pato expressed assurances that the matter would be fully investigated and that the PNG defense force had been asked for an explanation.

The sad turn of events appear to be the work of undisciplined local forces, rather than the calculated “testing” of Indonesia’s willingness to respond (along with the dispute with Australia covered below), as some opposition Indonesian politicians have claimed. As such it is unlikely to cause long-term damage to the relationship between the two nations, provided PNG is able to provide a full accounting.

Australia
In the third case, a long-brewing row with Australia over the latter’s naval operations to stem immigrants arriving by boat came to a head in mid-January amid revelations that the Australian forces carrying out the campaign had strayed into Indonesian territorial waters on several occasions. Jakarta demanded an apology and a halt to the policy of turning back vessels towards Indonesia. Additionally, Indonesian Navy and Air Force officials announced the deployment of frigates, corvettes, torpedo craft, missile craft, and maritime patrol aircraft along the long sea border with Australia to more readily respond to any future detected incursion.

Indonesia and others have criticized Australia’s operations as inhumane and questioned their legality, calling for the migrants to be treated as asylum-seekers. Prime Minister Tony Abbott’s government portrays the operation as a fight against people-smugglers who endanger the lives of their human cargo—sabotaging their boats to force Australian patrols to rescue the survivors.
The enforcement campaign, known as Operation Sovereign Borders, was revamped after Abbott took office in September with the “stop-the-boats” pledge becoming a central focus. Those asylum seekers who make it to Australian territorial waters are sent to camps in PNG—the site Monday of rioting and the death of a migrant—and Nauru for possible resettlement in those countries, as the Australian government has declared its borders closed to those who arrive on its shores. Migrants stopped further out to sea are towed by the navy back to Indonesian waters, their typical point of origin, and the cause of the spat with the nation. Those whose vessels have been sabotaged beyond repair are embarked on specially designed, single-use lifeboats and dispatched in the same manner.

Allegations, as yet unsubstantiated and strongly denied by Abbott, have also surfaced over treatment of the 45 survivors of a voyage that reached an island near Darwin on New Year’s Day, adding further rancor to the Indonesian-Australian relationship, which was already under the strain over revelations about Australia’s surveillance of Indonesia’s leaders.

The Australian government’s investigation into the incursions is reportedly complete, some of which is expected to be made public. Along with the confession of territorial violations, the government, the defense minister, and the customs head have all offered their apologies, while stressing their unintentional nature and promising to seek measures to prevent recurrences. This should go some way to soothing anger in Jakarta, which has accepted the initial apology but seeks fuller explanation for the incursions. However, as long as Operation Sovereign Boats continues, ties will remain fraught with the possibility of further missteps at sea.

Outlook
All of these grievances have arisen against a larger strategic backdrop that focuses primarily on China’s actions in the region. So it’s interesting that another development in the same waters between Australia and Indonesia has been notable for the latter’s restraint. While Australia’s news has been abuzz with coverage and analysis of China’s three-ship naval exercise and tour around the Southern Indonesian islands of Java and Bali, including reports of the scrambling of Royal Australian Air Force surveillance, reaction from Jakarta has been largely mute. In fact, an Indonesian government spokesman was quoted in the Jakarta Post as saying the Chinese fleet movements were “coordinated” with the Indonesia’s foreign ministry and a “token of friendship” with China, although a Lowy Interpreter post raises doubts as to the accuracy of the spokesmen’s statements in the story. As noted above, passage through straits requires no special permission.

Indonesia is going into campaign season, with parliamentary and presidential elections scheduled for April and July respectively. While the candidates will undoubtedly remain focused on domestic issues, especially from the charismatic mayor of Jakarta, Joko Widodo, these issues show that whoever emerges to lead the nation will have plenty to keep them busy on the international stage as well. Additionally, to the extent that these rows all center on matters of sea power, it heightens the perception of naval forces as an important tool of regional action and diplomacy—for good or ill. Yesterday the Indonesian House of Representatives finally funded the construction of the country’s first submarine, a deal with South Korea’s Daewoo approved in 2011.

Scott Cheney-Peters is a surface warfare officer in the U.S. Navy Reserve and the former editor of Surface Warfare magazine. He is the founder and vice president of the Center for International Maritime Security (CIMSEC), a graduate of Georgetown University and the U.S. Naval War College, and a member of the Truman National Security Project’s Defense Council.