Singapore and Indonesia: An Uneasy Coexistence? The latest tensions to emerge between Singapore and Indonesia—this time after Indonesia named a naval warship for two marines executed for a 1965 bombing in Singapore—caught many political observers by surprise. Relations in recent years had remained cordial despite several noteworthy incidents, such as the transboundary haze caused by Indonesian forest fires (for which Indonesian President Susilo Bambang Yudhoyono memorably apologized), and Singapore’s sand reclamation works on Indonesian islands. The political fallout from both incidents seemed to have been contained by both sides. 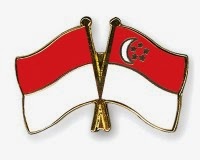 Yet in the recent days following Indonesia’s decision to name its new frigate the KRI Usman Harun, no fewer than five Singaporean ministers have spoken up against Indonesia’s actions, with the latest development being Indonesian defense officials pulling out of the Singapore Airshow (according to some reports, after Singapore canceled invites to junior officials).
As with many other political events, the role of discourse has been central to the development of these tensions. Underlying these discursive tensions are structural factors that have made this conflict to be particularly intractable. However, structure and discourse have often become intertwined.

The structural disparities between Indonesia and Singapore have surfaced from time to time, most symbolically in for Indonesian President B. J. Habibie’s dismissal of Singapore as “a red dot” in 1998, which struck a raw nerve among Singapore policymakers at the time. They later deftly turned it into a synonym for Singapore’s success, as evidenced by books such as The Little Red Dot: Reflections of Singapore’s Diplomats, which paid tribute to the success of Singaporean diplomacy in helping the country punch above its weight.

But size could also be a reason for the failure to resolve conflicts between Singapore and Indonesia. Size, in this sense, can be interpreted literally as well as symbolically, as the self-images of both countries. Both the original conflict in 1968 as well as the current one in 2014 have been directly attributed to size. When then-Prime Minister Lee Kuan Yew turned down a direct appeal by former President Soeharto to pardon the two Indonesian marines, in the words of former MFA Permanent Secretary Bilahari Kausikan, “he could not have done otherwise without conceding that the small must always defer to the big and irretrievably compromising our sovereignty.”

However, if Singaporeans are adamant that the small must not defer to the big, then the Indonesians are equally adamant that the big must not defer to the small. A few days ago, Indonesia’s Coordinating Minister for Political, Legal and Security Affairs Djoko Suyanto declared that “the fact that there is a different perception of Indonesian government policy by other countries, in this instance, Singapore, cannot make us backtrack or be uncertain about carrying on with our policy decision and implementing it.” Golkar MP Hajriyanto Thohari, deputy chairman of the People’s Consultative Assembly, went one step further, declaring “Let Singapore keep shrieking, like a chicken beaten by a stick.”

The Singapore-Indonesia dispute could have just been like any other in the region—and there is no shortage of them—with patriotic populations echoing the nationalist rhetoric of their political leaders. Yet what is particularly striking in this case is the disconnect between “official” and “popular” discourses. While politicians have tried to drum up support for their respective positions through the mass media, this has had limited resonance with Singaporeans and Indonesians, who regard each other as “friends” to the extent of questioning state discourses portraying the unreasonableness of the other side.

The mix of voices on both sides is evidence that nationalist narratives, while dominant, are balanced with a good dose of self-reflection among the general public in both countries. On February 8, the Jakarta Post published an editorial titled “Can we be more sensitive?” while on the same day, Singaporean playwright Alfian Sa’at argued that Singapore’s denial of clemency to the two Marines could have led to their “martyrdom,” setting off a chain of events that led to the current dispute. It is not the purpose of this essay to evaluate the veracity of these counter-narratives, but simply to point out that their existence is evidence of pluralism within both Indonesian and Singapore societies. This desire to understand the other’s perspective, despite state appeals to patriotism and nationalism, augurs well for the relationship between both countries, at least on a people-to-people level.

This article has argued that an asymmetry in size has formed the basis of the security dilemma that exists between Singapore and Indonesia, leading to a diplomatic impasse between the two countries. It has also shown, however, that a gap exists between official and popular discourses. With the exception of families affected by the 1965 bombing, the events of Konfrontasi, which took place half a century ago, have little resonance for Singaporeans and Indonesians who have the good fortune of living in an era of peace, one that both their countries have played a central role in creating, as founding members of the Association of Southeast Asian Nations (ASEAN).

Indeed, both Indonesia and Singapore continue to play very important roles in ASEAN. Indonesia had an active role in mediating between Thailand and Cambodia during the Preah Vihear conflict, through a process of “shuttle diplomacy” that was the work of Foreign Minister Marty Natalegawa. Singapore, too, was instrumental in the setting up of many ASEAN-related initiatives, most notably the ASEAN Regional Forum, ASEAN Plus Three, ASEAN Defence Ministers’ Meeting, and the Asia-Europe Meeting (ASEM).

Given the centrality of both Indonesia and Singapore to ASEAN, it is unfortunate that an error in judgment on the part of the Indonesian Navy has led to a diplomatic impasse from which neither the bigger nor the smaller state can extricate itself easily and gracefully—a timely reminder of ASEAN’s yet-unrealized dream of becoming a “security community.” Yet it is time for Indonesia and Singapore to set aside their historical grievances, painful as these may be, and concentrate on the areas in which further cooperation may be achieved, thereby sustaining their shared vision of creating a true ASEAN Community.

The author is a PhD candidate at the Lee Kuan Yew School of Public Policy, National University of Singapore.
Posted by Kerry B. Collison at 1:28 PM