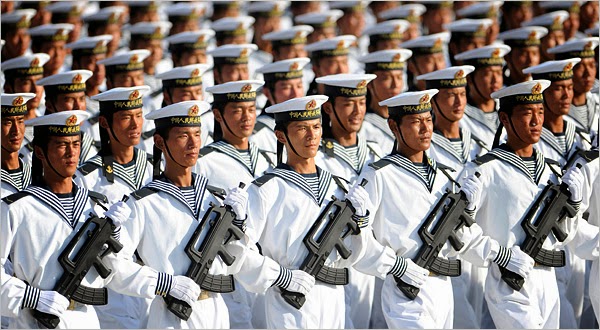 In many ways, the PLA is weaker than it looks – and more dangerous

In April 2003, the Chinese Navy decided to put a large group of its best submarine talent on the same boat as part of an experiment to synergize its naval elite. The result? Within hours of leaving port, the Type 035 Ming III class submarine sank with all hands lost. Never having fully recovered from this maritime disaster, the People’s Republic of China (PRC) is still the only permanent member of the United Nations Security Council never to have conducted an operational patrol with a nuclear missile submarine.

China is also the only member of the UN’s “Big Five” never to have built and operated an aircraft carrier. While it launched a refurbished Ukrainian built carrier amidst much fanfare in September 2012 – then-President Hu Jintao and all the top brass showed up – soon afterward the big ship had to return to the docks for extensive overhauls because of suspected engine failure; not the most auspicious of starts for China’s fledgling “blue water” navy, and not the least example of a modernizing military that has yet to master last century’s technology.

Indeed, today the People’s Liberation Army (PLA) still conducts long-distance maneuver training at speeds measured by how fast the next available cargo train can transport its tanks and guns forward. And if mobilizing and moving armies around on railway tracks sounds a bit antiquated in an era of global airlift, it should – that was how it was done in the First World War.

Not to be outdone by the conventional army, China’s powerful strategic rocket troops, the Second Artillery Force, still uses cavalry units to patrol its sprawling missile bases deep within China’s vast interior. Why? Because it doesn’t have any helicopters. Equally scarce in China are modern fixed-wing military aircraft. So the Air Force continues to use a 1950s Soviet designed airframe, the Tupolev Tu-16, as a bomber (its original intended mission), a battlefield reconnaissance aircraft, an electronic warfare aircraft, a target spotting aircraft, and an aerial refueling tanker.

But if China’s lack of decent hardware is somewhat surprising given all the hype surrounding Beijing’s massive military modernization program, the state of “software” (military training and readiness) is truly astounding. At one military exercise in the summer of 2012, a strategic PLA unit, stressed out by the hard work of handling warheads in an underground bunker complex, actually had to take time out of a 15-day wartime simulation for movie nights and karaoke parties. In fact, by day nine of the exercise, a “cultural performance troupe” (common PLA euphemism for song-and-dance girls) had to be brought into the otherwise sealed facility to entertain the homesick soldiers.

Apparently becoming suspicious that men might not have the emotional fortitude to hack it in high-pressure situations, an experimental all-female unit was then brought in for the 2013 iteration of the war games, held in May, for an abbreviated 72-hour trial run. Unfortunately for the PLA, the results were even worse. By the end of the second day of the exercise, the hardened tunnel facility’s psychological counseling office was overrun with patients, many reportedly too upset to eat and one even suffering with severe nausea because of the unpleasant conditions.

While recent years have witnessed a tremendous Chinese propaganda effort aimed at convincing the world that the PRC is a serious military player that is owed respect, outsiders often forget that China does not even have a professional military. The PLA, unlike the armed forces of the United States, Japan, South Korea, Taiwan and other regional heavyweights, is by definition not a professional fighting force. Rather, it is a “party army,” the armed wing of the Chinese Communist Party (CCP). Indeed, all career officers in the PLA are members of the CCP and all units at the company level and above have political officers assigned to enforce party control. Likewise, all important decisions in the PLA are made by Communist Party committees that are dominated by political officers, not by operators. This system ensures that the interests of the party’s civilian and military leaders are merged, and for this reason new Chinese soldiers entering into the PLA swear their allegiance to the CCP, not to the PRC constitution or the people of China.

This may be one reason why China’s marines (or “naval infantry” in PLA parlance) and other  amphibious warfare units train by landing on big white sandy beaches that look nothing like the west coast of Taiwan (or for that matter anyplace else they could conceivably be sent in the East China Sea or South China Sea). It could also be why PLA Air Force pilots still typically get less than ten hours of flight time a month (well below regional standards), and only in 2012 began to have the ability to submit their own flight plans (previously, overbearing staff officers assigned pilots their flight plans and would not even allow them to taxi and take-off on the runways by themselves).

Intense and realistic training is dangerous business, and the American maxim that the more you bleed during training the less you bleed during combat doesn’t translate well in a Leninist military system. Just the opposite. China’s military is intentionally organized to bureaucratically enforce risk-averse behavior, because an army that spends too much time training is an army that is not engaging in enough political indoctrination. Beijing’s worst nightmare is that the PLA could one day forget that its number one mission is protecting the Communist Party’s civilian leaders against all its enemies – especially when the CCP’s “enemies” are domestic student or religious groups campaigning for democratic rights, as happened in 1989 and 1999, respectively.

For that reason, the PLA has to engage in constant “political work” at the expense of training for combat. This means that 30 to 40 percent of an officer’s career (or roughly 15 hours per 40-hour work week) is wasted studying CCP propaganda, singing patriotic songs, and conducting small group discussions on Marxist-Leninist theory. And when PLA officers do train, it is almost always a cautious affair that rarely involves risky (i.e., realistic) training scenarios.

Abraham Lincoln once observed that if he had six hours to chop down a tree he would spend the first four hours sharpening his axe. Clearly the PLA is not sharpening its proverbial axe. Nor can it. Rather, it has opted to invest in a bigger axe, albeit one that is still dull. Ironically, this undermines Beijing’s own aspirations for building a truly powerful 21st century military.

Yet none of this should be comforting to China’s potential military adversaries. It is precisely China’s military weakness that makes it so dangerous. Take the PLA’s lack of combat experience, for example. A few minor border scraps aside, the PLA hasn’t seen real combat since the Korean War. This appears to be a major factor leading it to act so brazenly in the East and South China Seas. Indeed, China’s navy now appears to be itching for a fight anywhere it can find one. Experienced combat veterans almost never act this way. Indeed, history shows that military commanders that have gone to war are significantly less hawkish than their inexperienced counterparts. Lacking the somber wisdom that comes from combat experience, today’s PLA is all hawk and no dove.

The Chinese military is dangerous in another way as well. Recognizing that it will never be able to compete with the U.S. and its allies using traditional methods of war fighting, the PLA has turned to unconventional “asymmetric” first-strike weapons and capabilities to make up for its lack of conventional firepower, professionalism and experience. These weapons include more than 1,600 offensive ballistic and cruise missiles, whose very nature is so strategically destabilizing that the U.S. and Russia decided to outlaw them with the INF Treaty some 25 years ago.

In concert with its strategic missile forces, China has also developed a broad array of space weapons designed to destroy satellites used to verify arms control treaties, provide military communications, and warn of enemy attacks. China has also built the world’s largest army of cyber warriors, and the planet’s second largest fleet of drones, to exploit areas where the U.S. and its allies are under-defended. All of these capabilities make it more likely that China could one day be tempted to start a war, and none come with any built in escalation control.

Yet while there is ample and growing evidence to suggest China could, through malice or mistake, start a devastating war in the Pacific, it is highly improbable that the PLA’s strategy could actually win a war. Take a Taiwan invasion scenario, which is the PLA’s top operational planning priority. While much hand-wringing has been done in recent years about the shifting military balance in the Taiwan Strait, so far no one has been able to explain how any invading PLA force would be able to cross over 100 nautical miles of exceedingly rough water and successfully land on the world’s most inhospitable beaches, let alone capture the capital and pacify the rest of the rugged island.

The PLA simply does not have enough transport ships to make the crossing, and those it does have are remarkably vulnerable to Taiwanese anti-ship cruise missiles, guided rockets, smart cluster munitions, mobile artillery and advanced sea mines – not to mention its elite corps of American-trained fighter and helicopter pilots. Even if some lucky PLA units could survive the trip (not at all a safe assumption), they would be rapidly overwhelmed by a small but professional Taiwan military that has been thinking about and preparing for this fight for decades.

Going forward it will be important for the U.S. and its allies to recognize that China’s military is in many ways much weaker than it looks. However, it is also growing more capable of inflicting destruction on its enemies through the use of first-strike weapons. To mitigate the destabilizing effects of the PLA’s strategy, the U.S. and its allies should try harder to maintain their current (if eroding) leads in military hardware. But more importantly, they must continue investing in the training that makes them true professionals. While manpower numbers are likely to come down in the years ahead due to defense budget cuts, regional democracies will have less to fear from China’s weak but dangerous military if their axes stay sharp.

Ian Easton is a research fellow at the Project 2049 Institute in Arlington, VA. He was also a recent visiting fellow at the Japan Institute of International Affairs in Tokyo. Previously, he was a China analyst at the Center for Naval Analyses.