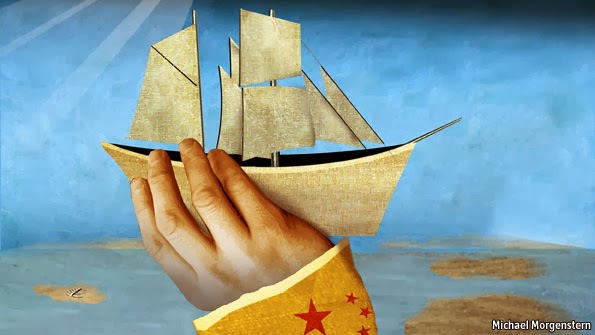 In early February 2014, China made waves in the somewhat quiet and uncharted waters of the Indian Ocean by undertaking two significant initiatives.

First, it conducted naval exercises in eastern parts of the Indian Ocean while traversing the waters of the Pacific and the straits of Indonesia. Second, it invited India to be a part of its Maritime Silk Route Initiative during the 17th Round of India–China Special Representatives (SR) Talks on border issues in New Delhi.

Chinese President Xi Jinping had originally proposed this idea in October 2013 during his visit to Indonesia when he invited Jakarta to join the initiative. Though the details of the proposal are not known, it aims at strengthening maritime connectivity among the partner countries by developing maritime infrastructure.

The two recipient Asian powers — India and Indonesia — have interpreted and responded to these two initiatives differently, treating them as independent measures rather than parts of an overarching agenda.

Indonesian responses have varied between being somewhat passive about the idea of a maritime silk route and permissive about allowing the Chinese navy to use its maritime passage. On Feb. 15, The Jakarta Post quoted an Indonesian Navy spokesperson as saying that Indonesian permission for the passage of the Chinese fleet was a “token of friendship” to Beijing and a snub to Australia.

In India, these two initiatives have generated an intense debate with the discussion over the idea of the maritime silk route drawing attention from apprehension about Chinese naval exercises.

The debates about and responses to the recent Chinese overtures in the Indian Ocean have highlighted four specific points. First, these two initiatives are not disjointed actions but rather an integral part of China’s grand Indo-Pacific strategy that plugs in the missing Indian Ocean part of the region. Separately, they may appear to be a projection of China’s naval strength and its willingness to build relations based on historical connections.

Together, they reflect the emerging contours of China’s strategy in the Indian Ocean, where it does not have territorial claims and cannot project its power as forcefully as it can along its southern rim in the Pacific Ocean. Having made its intentions clear in the Pacific, China is now moving to the Indian Ocean where its role and influence is less intrusive.

Second, the basic objectives of these initiatives are to divert attention from the contentious Pacific to the somewhat more peaceful Indian Ocean and to convert China’s image as an outsider in the Indian Ocean to a rightful navigator. While it is not clear how much China will be investing in developing this corridor, such an arrangement could have the impact of not only legitimizing the Chinese strategic presence in the Ocean, but also binding both India and Indonesia, at least, politically in acknowledging the potential Chinese naval movement in the Indian Ocean.

Third, the current strategy is essentially an upgrade on China’s previous strategy of engaging with smaller countries or “pearls”. In contrast, the current approach seems to accord a more privileged position to two influential littorals — India and Indonesia. The new approach represents a continuation of China’s current policy of building trust with two other rising powers of Asia.

The idea of a maritime silk road brings together three rising Asian powers into a viable framework of tangible economic and political cooperation. Moreover, while there is no official Chinese reference to the “string of pearls” theory, the maritime silk route seems to be pushed forth by the top leadership.

Fourth, these initiatives are essentially a wake-up call for the three principal players and stakeholders in the Indian Ocean — Australia, India and Indonesia. They have shown a meager sense of commitment for cooperation under the Indian Ocean Rim Association (IORA), and the modalities of cooperation remain highly underdeveloped.

While Australia has remained distant from the Indian Ocean, India, unwilling to engage others, has pursued a stand-alone approach. Indonesia, on the other hand, has only recently begun to talk about the Indian Ocean.

It is time for Australia, India and Indonesia to begin consolidating their cooperative processes in the region and lay down the rules of the game in this somewhat unordered and relatively less-engaged ocean. More concerted efforts toward both bilateral and multilateral cooperation in the Indian Ocean are needed.

In this regard, the conversion of the India-Indonesia coordinated patrol into full-scale joint naval exercises is a welcome effort. An active and effective IORA may provide an important venue for cooperation. Australia is the current chair and Indonesia will be the next chair. Chinese naval exercises close to Australia’s Christmas Island and the Indonesian concession to the Chinese posture may prompt Canberra to mend ways with Indonesia and disengage from pinpricking its northern neighbor.

The shape of the Indian Ocean Order will depend on the level of cooperation and engagement between Australia, India and Indonesia. As the Indian Ocean experiences an increased frequency of military and economic engagement in the coming years, these powers are going to have to deal with more complex geostrategic realities in the region. The Chinese naval exercises and maritime silk route are just the beginning.