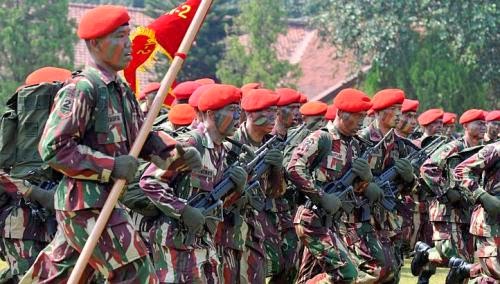 The United States plans to help modernize Indonesia’s military, including provisions for training and equipment, amid heightened tensions in the South China Sea, where China is laying claims to disputed waters

US Ambassador to Indonesia Robert O. Blake Jr., at a press conference hosted by the Jakarta Foreign Correspondents Club on Thursday, said that the US government would continue to assist the Indonesian Military (TNI) with bilateral exercises and supply it with modern equipment.

“We’ve had a growing scope of bilateral exercise with the Indonesian military, and we’re very pleased with that,” Blake said, in response to a question about what the US is doing to help Indonesia’s security. “We have excellent security cooperation now between our two countries. We’re working to help Indonesia modernize its military, helping Indonesia with all kinds of training and other equipment needs, and we’re excited about the prospects.”

Indonesia has been making plans to increase its purchases of military hardware from abroad, including submarines from Russia and South Korea. It will also buy equipment from France and Britain, and eight Apache attack helicopters valued at $600 million from the United States. Those will arrive in separate shipments through 2017.

China has been exerting its influence beyond its shores, with warships patrolling the South China Sea, in areas that it believes are part of its territory and not those of neighboring nations such as Vietnam and the Philippines. The South China Sea potentially has vast crude oil and natural gas deposits.

Some leaders across the region have been alarmed by the increase in China’s activity in disputed waters.

Blake, though, says that China is within its rights in conducting their latest activities, on the basis that certain areas of the South China Sea are open for use by any nation.

“I would say first of all those are international routes that any navy can use, including ourselves that can do that, so we don’t consider that a particular provocation,” Blake said.

Aleksius Jemadu, dean of the School of Social and Political Sciences at Pelita Harapan University, said that the US saw Indonesia’s growing economy and increased military budget as a target market for selling it military technology.

“The US doesn’t want to get left behind, the market is growing very fast and looking at the coming years, it wants to use its [Indonesia’s] market for selling weapons,” Aleksius said.

He said that while the US would profit from such sales, it wanted to see stability in this part of the world and envisioned Indonesia playing a big role in achieving that.

Still, growing nationalistic attitudes from East Asian countries such as China and Japan could undermine stability in the region, he said.

“Indonesia plays a role in keeping military security in Southeast Asia, and nationalism is on the rise. In Japan and China, with their disputes over the East China Sea, it is a threat to stability to the region as a whole,” Aleksius said.

He said that Indonesia still needed to modernize its military, as it had fallen behind the military spending of neighboring countries with much smaller borders to protect.

“Indonesia needs to modernize its system because over the last few years, the budget is not high compared to other Southeast Asian nations. It’s lower than Singapore and Malaysia,” he said.
Hikmahanto Juwana, professor of international law at the University of Indonesia, echoed Aleksius’s opinion.

“This is the right thing to do because of what is happening in the South China Sea and the region,” Hikmahanto said.

“It’s difficult to say if China broke laws, but the Australians have breached Indonesian territorial waters. The Indonesian government would want to hold multilateral talks to resolve this issue. I think that any issue that has to do with the asylum issue is a bilateral issue between Australia and Indonesia,” Hikmahanto said.