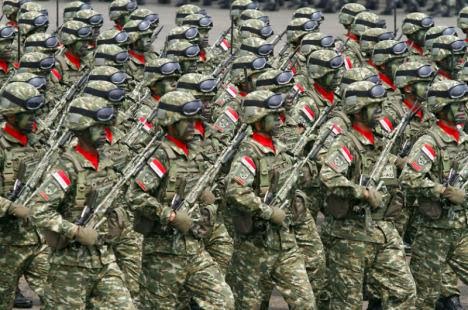 Its mainly peaceful transition to democracy over the last 15 years has made Indonesia a shining light for political reform in the developing world. The fact that it is also the world’s most populous Muslim nation makes Indonesia glow even brighter in the eyes of the West, which has struggled for more than a decade against Islamic extremism

But as with many countries in the region — Thailand being the most prominent example — Indonesia’s democracy remains fragile. A troubling trend of religious intolerance and a failure by the leadership to uphold constitutional guarantees of pluralism threaten to undermine the progress made since the end of President Suharto’s military-backed authoritarian rule in 1998.

And though the Indonesian Army is constrained by laws designed to curb its power, if the country’s elected leaders fail to take steps to protect Indonesia’s pluralist foundations, the army could reassert itself by playing a more muscular role in politics — as it did before. As Juwono Sudarsono, a former defense minister, said to me, “The army may have to come forward and make sure that democracy works.”

As if to underline this point, the head of the Army Strategic Reserve Command, Lt. Gen. Gatot Nurmantyo, recently voiced doubts about the course of democracy. “The many,” he said, “are not necessarily right.” Similarly, Budi Susilo Soepandji, head of the National Resilience Institute, a military research institute, said “excessive freedom” promoting “radical ideologies” had begun to undermine the country’s bedrock values of pluralism. Those in close touch with military thinking like Sudarsono say the army is deeply concerned about the government’s failure to curb religious extremism and corruption.

Violent attacks on religious minorities are on the rise, sowing widespread insecurity. The Setara Institute, a nongovernmental organization, has measured successive increases in the number of violent attacks against religious minorities since 2007. In 2013, there were violent clashes between Shiites and Sunnis in East Java, continued persecution of the tiny Ahmadiyya Muslim sect in West Java, and the forced closure of Christian churches on the outskirts of Jakarta.

Religious extremism in Indonesia is a byproduct of parochial politics. Laws that ban the defamation of religion or prevent the building of new places of worship that are not mosques allow self-serving politicians to appeal to the Muslim base for votes by propagating hatred of minority Islamist sects or shutting down churches. Although more than 80 percent of Indonesians are Muslims, millions of Christians and Hindus, as well as minority Muslim sects such as Shiites and Ahmadis, have the constitutional right to freedom of worship.

It’s hard to roll back this kind of prejudice when national leaders refuse to sanction or disown narrow-minded local politicians and officials. The religious affairs minister, Suryadharma Ali, has defended attacks against minority Muslim sects, saying he understands the anger of the majority Sunni community. Home Affairs Minister Gamawan Fauzi has described the “Islamic Defenders Front,” a militant group that has attacked premises serving alcohol, as a “national asset.”

The government has been disappointing in other areas as well. Indonesia is on par with Egypt and Albania in levels of corruption, according to Transparency International. The jails are full of corrupt officials, including a former chief judge of the constitutional court. And though elections are held regularly, the system favors entrenched elites and interest groups.

Democracy is widely believed to be more procedural than substantial. President Susilo Bambang Yudhoyono, elected in 2004 on the strength of his reformist military credentials, has shown a tendency to avoid taking bold initiatives. Problems have festered on his watch.

Ahead of presidential elections in July, opinion polls suggest that Indonesians favor a populist leader, Joko Widodo, a former furniture maker who was elected governor of Jakarta. But Jokowi, as he is known, is untried on the national stage. While he is seen as effective against corruption, there is no evidence that as a Muslim who once flirted with membership in an Islamic party he can roll back the tide of intolerance.

The current situation has a historical parallel. Indonesia was a thriving if rambunctious democracy in the mid-1950s, but the erratic nature of President Sukarno’s leadership and threats to the integrity of the state from an Islamic rebellion alarmed the army, led to the imposition of “guided democracy,” and eventually to army-backed rule after 1966. Much like the situation in the 1950s, today’s combination of poor civilian leadership and weak protection of minorities has fanned intolerance.

The army no longer wields real political power, but it remains influential and could make a comeback. As the country’s strongest institution, it is still widely admired. Traditionally, the army has a healthy disregard for the quality of civilian government and has prided itself as a source of leadership.

Although the days are gone when military officers sat in Parliament or were stationed in every village, the army still has its fingers deep in the political pie through a network of influential retired officers. The sitting president is a former general. A few former generals are positioning themselves to run for the presidency in July. One leading contender, Prabowo Subianto, is a former Special Forces commander with a questionable human rights record.

Faced with a choice between divisive and corrupt civilian politicians or strong military leaders who ensure that pluralism is respected and government delivers, Indonesians may not be averse to a firm hand on the tiller — as long as it is cloaked in the trappings of democracy.
Michael Vatikiotis is Asia regional director of the Center for Humanitarian Dialogue.