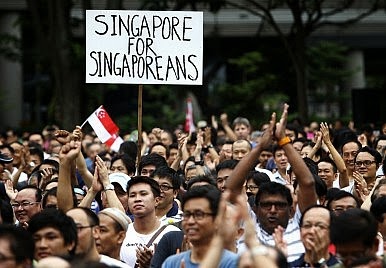 A sharp rise in the foreign population has ratcheted up racial tensions.

Does Singapore have a problem with xenophobia?

It seems that barely a month goes by these days without news reports highlighting friction between Singaporeans and foreign workers in the tiny, multi-ethnic city-state.

The population has increased dramatically in recent decades thanks to an influx of foreigners, who now make up around two out of five residents. This has put a growing strain on jobs, housing and infrastructure, and raised fears about the dilution of the Singaporean national identity.

It has also—predictably—resulted in an angry backlash, with many taking to social media to disparage foreign workers, from highly paid “foreign talent” to heavily exploited laborers from China and the Indian sub-continent.

The abuse is often so vicious that in his 2012 national day rally speech, Prime Minister Lee Hsien Loong noted the proliferation of posts “tormenting and berating” foreigners, adding: “Very few people stand up to say this is wrong, shameful, we repudiate that. I think that is no good.”

In the latest high-profile incident, British banker Anton Casey lost his job and was forced to flee the island last month with his wife — a former Miss Singapore Universe — and son. The hapless Casey received death threats after making sneering comments on Facebook mocking the “poor people” using public transport, though his comments probably had more to do with social class — a subject rarely discussed in Singapore — than with race per se.

Anyone familiar with Singapore knows that race is a national obsession, and far more than a box to be ticked on official forms. This obsession permeates the country, and Dr Michael Barr of Australia’s Flinders University argues that it is important to distinguish between racism within the mainstream of society and that directed at outsiders.

“Singapore is very racist even towards its own minorities, but this is mostly accepted by the minorities as the cost of living in a society that is safe and prosperous, and which they can genuinely call home,” says Dr. Barr, senior lecturer in international relations and the author of a forthcoming book on Singapore’s leadership.

He argues that after independence in 1963, the government of former prime minister Lee Kuan Yew tried to break down the rigid racial divides inherited from the British, and to create a genuinely multiracial society.

But from the late 1970s it changed course, pushing instead to create a “Chinese” society with Indian and Malay minorities. From then on, race became “the major social identifier for Singaporeans,” and racism “a natural consequence of living in a society where racial stereotypes are encouraged and indulged by the government.”

“Unfortunately this has meant that in the 2000s and 2010s, just when foreign workers are moving into the front view of Singaporeans’ consciousness for the first time due to the government’s decision to flood the market with foreign workers, Singaporeans are already well-trained in racial stereotyping. They’ve had a lifetime’s training,” says Barr.

“Of course, even without this training the elements are there for a racist reaction. With two out of every five people in Singapore being a foreigner, it is a recipe for disaster, even without any other factors operating. Then we throw in the fact that the government, by its own admission, completely dropped the ball on providing infrastructure to cope with the influx of outsiders, and it would be surprising if there wasn’t a negative reaction to the outsiders, whether or not it was racist.”

Singapore’s stellar growth in the past few decades has seen it hailed as one of the world’s great economic success stories. The People’s Action Party (PAP) has ruled with an iron fist while overseeing the island’s transformation into an international financial center and manufacturing hub, with a per capita gross domestic product higher than the U.S.

However, this growth has been achieved predominantly by adding labor input — importing foreign workers — rather than increasing the underlying productivity of home-grown workers. Foreigners now make up about 38 percent of the total population of 5.3 million. In 1990, that figure was 14 percent, when the total population was around 3 million.

Last year, a government policy paper called for the population to increase a further 30 percent by 2030, to 6.9 million, at which time immigrants would account for nearly half of the island’s population. Thousands of people attended two rare protests against the white paper, holding signs with slogans such as “Singapore for Singaporeans.”

Fueled by angry reactions on social media and websites critical of the government, the issue of immigration has become a political hot potato for the PAP. At the 2011 general election, opposition parties won six seats in Parliament — the most since independence.

Kenneth Jeyaretnam, leader of the opposition Reform Party, says there is “no minimum wage and no social safety net, so competition from immigrants has definitely depressed wages and reduced job prospects for Singaporeans.”

“All racism is at bottom economic, and Singapore is no different,” he told The Diplomat. “The rising population has raised the returns to the owners of fixed factors like land. Since the Singapore government owns 80 percent of the land, this benefits them. The surpluses generated from the growth of the economy and the higher population have not been used to compensate Singaporeans but instead gone to the accumulation of foreign assets in our SWFs [sovereign wealth funds].

“If we had a minimum wage and greater protections for our workers then there would be less objection to foreigners. Instead of that, we have senile old men like LKY [Lee Kuan Yew] talking about the need for more Darwinian competition and how admitting more foreigners acts as a spur in the sides of Singaporeans … The reaction to Anton Casey shows that Singaporeans increasingly see themselves as patsies who are being exploited by not very well educated or particularly talented foreigners. Resentment extends to foreigners at all levels and regardless of race, except perhaps for those doing the dirty and dangerous jobs for less than S$20 per day.”

There is anecdotal evidence that the increasing hostility is driving some foreigners away. This writer experienced unpleasant racism in the workplace during the three years he spent working at a major media company in Singapore, and several fellow expats have cited it as a reason for leaving the country.

One Briton said he did not want his son growing up in such a poisonous atmosphere, a German friend compares Singapore with Nazi Germany, and a Dutch friend was driven to leave after a woman in a supermarket told his pregnant Thai wife to abort their “whore child” because it “would not be welcome in Singapore.”

The Dutchman, a 37-year-old who works in IT and relocated to Bangkok last year, said he was also set upon on three separate occasions by local youths shouting racial slurs and things like “go home to your own country” and other unpleasant epithets. Each time, he said, police refused to investigate, saying he must have been involved in a drunken altercation and should leave it at that.

Yet the worst abuse is usually reserved for low-paid construction and service sector workers from China, India, Bangladesh and the Philippines. Mainland Chinese are known as “PRCs” — from the People’s Republic of China — and are often ridiculed for their poor English and perceived lack of social graces by the ethnic Chinese who make up around 75 percent of Singaporeans. Chinese bus drivers who staged an illegal strike in 2012 cited this discrimination as one of the reasons for their unhappiness.

Online forums are full of vicious comments about “PRC scum,” “foreign trash,” Filipino “cockroaches” and so on. An event held by Singaporeans in Sydney to celebrate the city-state’s national day last year attracted attention when locals and other foreigners were apparently refused entry. Summing up the siege mentality of many Singaporeans, one of the attendees wrote on a local blog afterwards that: “Everyone of us were on the same page. There were no PRCs, India Indians, Bangla or Pinoys [Filipinos] to annoy us.”

Associate Professor Tan Ern Ser, a sociologist at the National University of Singapore, argues that the influx of mainland Chinese “enhances Singaporeans’ sense of identity insofar as they seek to differentiate themselves against the other nationality.”

He adds: “My sense is that competition produces prejudice or enhances pre-existing prejudice, which could come in the form of putting down the other nationality. The feeling of cultural superiority could be mutual.”

Dr. Barr concurs, noting while Singaporean Chinese and Singaporean Indians react negatively to the arrival of new immigrants from, respectively, China and India, “we must remember that there are ethnic prejudices operating within each of these societies, and some of these prejudices contain elements of racism — but more on the part of some of the foreign workers than on the part of Singaporeans. The ancestors of both Singapore Indians and Singapore Chinese come from the south of India and China, and most of the new immigrants come from the north — and in the old countries, northerners looked down upon southerners and southerners resented it.

There are other factors at play in this growing resentment, such as the fact that Singaporean men have to do two years of national service, putting them at a disadvantage compared to foreigners. Singapore is also a fast-paced, stressful society — both a city and a country at the same time — and Singaporeans work the longest hours in the developed world, according to some studies. With an authoritarian government tightly restricting legitimate outlets for protest and the timid state-linked press rarely raising the issues in a critical manner, the backlash against foreigners has been all too predictable.

Indeed, the surprising thing is perhaps not that it has occurred, but that it hasn’t occurred on a greater scale. Several initiatives have been launched by civic-minded Singaporeans to tackle the problem of racism and xenophobia, and many expats and visitors note the warmth and friendliness of locals. Indeed, argues Jeyeratnam, it is “unfair to accuse Singaporeans of racism when if a European government adopted the PAP’s policies it would soon be replaced by a far-right party!”
However, the issue of immigration is likely to become more heated, and more strikes and social unrest, like the recent rioting in Little India, seem likely in the future.

“My concern is that apart from stresses on infrastructure, we have two-fifths of the population who have not been at all assimilated into Singapore society and who are becoming both victims of and perpetrators of prejudicial attitudes and reactions,” says Dr Barr.

“Almost none have any loyalty to Singapore, many don’t speak English. Many don’t speak any of Singapore’s four official languages. Most are living in dormitory ghettos and are being exploited shamelessly. And they stand out. Even the PRC Chinese stand out from the Singapore and Malaysian Chinese. It is just human nature to both blame and fear the ‘other.’”
Mark Fenn is a British journalist based in Bangkok.