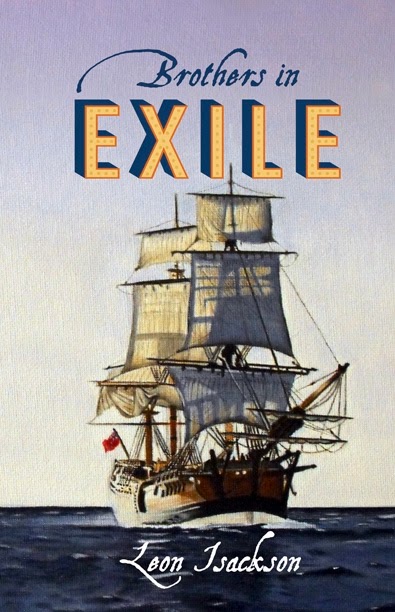 Brothers in Exile is an exciting journey through Australian history from 1812 to 1937, as the author sets out to solve the secrets of a mysterious grandmother he never knew. The saga begins with three convict brothers, a well‑to‑do settler and a reverend as they arrive in the Macquarie penal colony of 1813.

From daring escapes, shipwrecks and exploration to squatters, gold and bushrangers, the book sheds new light on the real‑life struggles and fortunes of 19th century Australian pioneers and immigrants who shaped the nation from a crude convict settlement into federation and beyond.

Biography- An avid interest in Australian history and a chance family incident triggered a search by Leon Isackson and his siblings for information about their maternal grandparents. The more they researched, the more fascinating the information became. Fortunately Isackson had already written a hugely successful first book (and an updated version some years later) about his Rock and Roll career. He had the skills and enthusiasm to now gather this new (to him) true and wonderful material about his family into a book which encompasses one of the most fascinating and tough eras of Australian history and describes the antics of many colourful characters so well-known to us all, whose paths crossed with those of Leon’s ancestors again and again.

Sydney-born Leon Isackson enjoyed a career as a drummer extraordinaire in the most exciting era of Australian Rock and Roll, performing in what were to become famous bands, in fact great icons of those heady years. He began with Dig Richards & The R’jays in 1959, which became The Rajahs in 1964 and Johnny O’Keefe’s backing band for three years. He entertained the troops in Vietnam with Lucky Starr and then Eden Kane; this led to the creation of the Australian Overseas Forces Entertainment Fund. Other famous names Isackson either toured with or recorded and arranged for were The Chant, the Delltones, Johnny Farnham, Russell Morris and the amazing Winifred Atwell with whom he played for several years. In the 90s he co-founded The Mighty Guys with guitarist, Mick Hamilton, which made three successful albums for Glenn A Baker.

Based on his diaries from 1956 to 1966, Isackson’s first book, Behind the Rock, co-authored with the late Jon Hayton, was released by Time-Life in 1990 to rave reviews. It was then released again by Sid-Harta in 2010 as Behind the Rock and Beyond, updated by Isackson to 1980.

Leon Isackson lives on the Northern Beaches in Sydney with his family and, as well as writing and researching, continues to play and write music.