Why Does India Have So Many 'Strategic Partners' and No Allies? 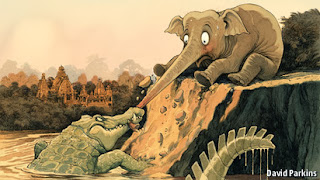 It took a long time, but over the past decade, India demonstrated that it was finally comfortable shedding the old vestige of Cold War strategic thinking that was non-alignment. A witness to colonialism and victim to external exploitation, India eschewed alliances and all-weather partnerships for most of the 20th century. It spent its early years as an independent sovereign actor in Asia fomenting the so-called Non-Aligned Movement (NAM) which persists to this day.

Of course, India hasn’t swung full-force into any alliances in the past decade – it has to walk before it can run in that regard. Instead, Indian foreign policy has embraced the concept of “strategic partnerships.” India currently conducts bilateral relations on the level of “strategic partners” with the United States, Russia, China, Japan, Indonesia, Australia, Vietnam, South Korea, Iran, ASEAN, Afghanistan and several others. At this point, I wouldn’t fault a reader for wondering what the deal is with these “strategic partnerships.” India’s relations with the aforementioned laundry list of countries vary greatly. Why does India – at least formally and rhetorically – grant the same level of diplomatic elevation to its relationship with China as it does to its relationship with the United States and Japan?

It’s a matter on which there is little consensus, scholarly or otherwise. India has yet to officially define the objective standards for a “strategic partnership.” I’m by no means the first observer of Indian foreign policy to ponder these questions. Nirupama Subramanian over at The Hindu wrote last year that “Strategic partnerships are commonly associated with defense or security related issues, but a survey of formal strategic partnerships around the world reveal they can also be quite a hold-all, covering a wide range in bilateral relations, from defense to education, health and agriculture, and quite commonly, economic relations, including trade, investment and banking.”

Hence the addition of the “strategic” qualifier to the “partnership.” The method is a way for India to get its foot in the door for further diplomatic engagement on military and defense issues should circumstances change. In the meantime, acknowledging that its foreign policy is driven primarily by its economic priorities, the proliferation of such partnerships begins to make more sense.

A former Indian foreign secretary and career diplomat, Kanwal Sibal, attempted to address the dearth of understanding in foreign policy circles on the issue. Acknowledging the lack of objective consensus around the term, Sibal notes that “strategic partnerships” are declarative instruments of policy for India – an effort to “underline its commitment to build a longer-term relationship … by deepening ties and promoting convergence in external policies on issues of mutual interest.” Sibal’s definition seems closer to the truth in terms of what India tries to do in actuality with its strategic partners. After the declaration of a strategic partnership, India doesn’t immediately fast-track relations to expand along all axes – it is rather more prone to take its time and weigh the pros and cons of deeper engagement very seriously.

Another misconception about India’s strategic partnerships is that they all entail the same level of engagement. In reality, there is a hierarchy that is well appreciated by the foreign policy community in India. In a report issued by a group of experts (including Sibal) from the Foundation for National Security Research in New Delhi called “India’s Strategic Partners: A Comparative Assessment,” the authors methodically rank India’s top strategic partners with a corresponding score out of 90 points. In the final ranking, Russia comes out on top with 62, followed by the United States (58), France (51), UK (41), Germany (37), and Japan (34).

The “strategic partnership” model is often deeply frustrating for outsiders looking towards India. In my conversations with American experts, I’ve seen a perception that India’s so-called strategic autonomy in this regard can be seen more as dilly-dallying – a criticism that echoes from the days of outright non-alignment. India remains partially tethered to the underlying strategic logic of non-alignment, even though its policymakers see a clear hierarchy in its foreign relations today.

Ultimately, my view on the “strategic partnership” meme in Indian foreign relations is that it allows a nation that has not entirely shed its non-aligned roots to experiment with comprehensive diplomatic engagement like never before. It’s a form of beneficial ambiguity for India: the foreign policy equivalent of a first date. If things go well, India may be likely to take things more seriously and ultimately begin using that long-dreaded A-word (alliance).By Ankit Panda for ‘The Diplomat’