The Dead and the Reds in the Philippines 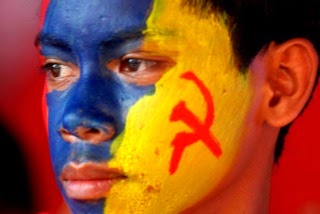 
The Philippine government’s disarray in dealing with the impact of Typhoon Haiyan on 10 million or so Filipinos, with hundreds of thousands struggling with inadequate aid to recover or simply survive, threatens to revitalize support for communist insurgents in the huge area devastated by the storm.

Meeting and mediating the pressing needs of almost 10 percent of country’s entire population is a process that will certainly take many months – and if other similar massive natural disasters are a guide – years for the affected areas to return to pre-typhoon economic output and social cohesion.

Even at this stage in the post-storm rescue and recovery phase it is clear that the Philippine government has, or is certainly perceived to have, failed in its basic duty of care to its citizens by its inability or unwillingness to mobilize every resource to reduce suffering and restore a sense of order and community. Six days after Haiyan slammed into Leyte and Samar islands, large numbers of the dead remain unburied and relief supplies remain clogged in Manila and Cebu, far from where they are needed.

This failure may well have longer-term consequences on much of the region, notably the rural areas, as an angry and frustrated populace turn to other sources of authority or power for protection and redress. Religion may provide solace for many, while a much smaller minority may well choose to directly challenge a state that, in their experience, has done little or nothing to protect or succor their communities.

If this view is correct, the Communist Party of the Philippines (CPP) and its overt and armed wings may well be the beneficiaries of the government’s weak initial response to catastrophe and the subsequent and inevitable misallocation of aid, either through corruption, fraud and outright theft.

The CPP was quick to recognize the potential afforded by Typhoon Haiyan. The party offered to demonstrate its apparent concern for the typhoon’s likely victims by ordering its “revolutionary mass organizations,” ranging from village committees to armed New People’s Army (NPA) units in the Bicol, Eastern Visayas, Central Visayas, Negros Island, Southern Mindanao, North Eastern Mindanao, North Central Mindanao and adjoining regions to prepare for the typhoon’s impact a day or so before the storm made landfall.

Once the full extent of the damage inflicted by the storm began to emerge the CPP on Nov. 11 issued further often-bombastic “instructions,” including orders for NPA guerrilla units to cease any military operations against the government and carry out “search, rescue, relief and rehabilitation efforts.” The CPP also emphasized what it characterized as “the Aquino regime’s slow and terribly inadequate response to the disaster.”

Such a response is unsurprising and corresponds with the CPP’s standard propaganda language and willingness to use any event to promote its interests. However, if NPA and other CPP affiliated groups are able to carry out even limited relief or assurance work at the expense of the state, the potential for a resurrection in communist guerrilla activity in the region increases.
According to Allan & Associates sources within the Armed Forces of the Philippines (AFP) the number of NPA activists and general support for the communist movement in the Visayas were in decline. The military also claims to have cleared the islands of Cebu, Bohol and Leyte of significant NPA presence. Negros, with four fronts, now report the highest number of guerrilla fighters in the region, followed in order by Panay and Samar.

According to AFP sources a combination of the military’s anti-insurgency programs – Internal Peace and Security Plan (IPSP) and Oplan Bayanihan – resulted in the army capturing most of the NPA’s command structure in the region and reducing the number of active NPA ‘fronts’ from 25 in 2009 to 10 by end-2012, and the number of fighters from 2,500 to 900 over the same period.

While initial military intelligence reports from the storm-affected regions on Samar, Negros and Panay islands suggest that the CPP, through the National Democratic Front (NDF) – an umbrella grouping of leftist, civil society, trade unions and indigenous rights groups – had sought an indeterminate ceasefire with the AFP, it is unlikely such an arrangement will be either be agreed or be workable.

The area was north of the provinces seriously affected by the typhoon. There have been unconfirmed reports of military personnel looting cash machines and banks, allegations the CPP, NPA and NDF can be expected to broadcast and attempt to exploit.

What happens next in terms of the ‘hearts and minds’ aspect of post-disaster recovery is almost entirely in the hands of the Philippine government. There are two models they may wish to consider – the impact of the December 2004 tsunami on Indonesia’s Aceh province and the aftermath of Typhoon Bopha that slammed into Mindanao’s Compostela Valley in southern Philippines in December 2012.

The tsunami is credited with effectively ending a long running insurgency in Aceh by effectively annihilating the support structure and many guerrillas from the province’s powerful insurgent movement. A huge and sustained international effort, plus government initiatives to draw the surviving Aceh separatist insurgents into political dialogue and eventual limited regional power and authority, has led to an degree of stability virtually unknown in the provinces for generations.

By contrast, and certainly more pertinent for the present crisis in the Philippines, was the failure of Manila to take advantage of Bopha’s devastation in Mindanao – a region unused to such natural calamities. Aid to the Compostela Valley, already an active CPP/NPA zone, was inadequate and led more by military expediency than humanitarian – or even pragmatic – concern or interest. The result is that the NPA in eastern Mindanao, which includes the Compostela Valley, has expanded to 36 fronts according the AFP – or 46 if one accepts the NPA count, with around 3,000 fighters and other activists.