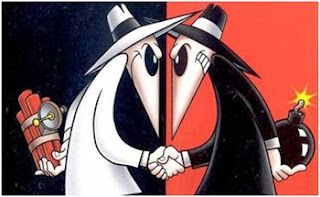 IT is ridiculous to imagine the Indonesian government is surprised by the news Australian intelligence agencies, in co-operation with US counterparts, intercept some of their phone calls and digital communications.
Indonesia itself has formidable intelligence agencies that are not exclusively directed at domestic targets

The truth is, every nation with the capability engages in signals intelligence collection, and in spying more generally.

Nonetheless, Jakarta's general reaction is understandable, although it seems overstated.

But this is still a moment of some serious danger in the Australia-Indonesia relationship.

Foreign Minister Marty Natalegawa seems to be putting things at their worst when he threatens to review co-operation on counter-terrorism and people-smuggling, and demands what he knows is impossible: an Australian promise never to spy on Indonesia again.

Natalegawa, whom I have previously always regarded as a consummate diplomat and a friend of Australia, seems to be taking too much pleasure in having a go at us lately. His recent action in releasing a record of a confidential conversation between himself and Foreign Minister Julie Bishop was inexplicable and a gross breach of diplomatic protocol.

All this may reflect the intense nationalism that still animates much of Indonesian politics and public life. Indonesia is a young nation. There are still Indonesians who remember life as colonial subjects.

As a state, it is a wildly diverse amalgam of ethnicities and languages whose chief common bond was rule by the same colonial master. It is also prey to the wide range of conspiracy theories that permeate every corner of the Islamic world. On top of that we are in the lead-up to Indonesian parliamentary and presidential elections next year, so every significant player in Jakarta is polishing his nationalist credentials.

Tony Abbott and Bishop must be as soothing, respectful and accommodating to Jakarta as they possibly can be, while making no admissions about the past and offering no unrealistic promises about the future.

The real villain here is Washington. I have absolutely no complaints about US spying activities. The world is infinitely safer because the US collects intelligence. But Edward Snowden, a mere technical contractor to the National Security Agency who became alienated from his nation's purpose, had access to countless US secrets. Before that Private Bradley Manning was able to give millions of secrets to WikiLeaks.

This level of access, for such junior and marginal figures, is grotesque, irresponsible, inexplicable.

The US has severely damaged its standing and is now damaging the standing of its closest allies, among them Australia.

The US is caught for the moment in the crunch of two contradictory digital dynamics. The first is that digital technology is making the collection and retention -- and, if necessary, later analysis -- of absolutely vast amounts of information quite easy. Never before in its history has the US enjoyed the ability to listen, watch, snoop and see that it enjoys today.

The opposite trend is that the fluidity of digital technology means anyone who gets into your system, especially your own staff, even apparently at junior level, can eventually access almost anything in that system. You get a couple of disgruntled crackpots such as Manning and Snowden and the damage is almost incalculable.

No one is better at digital technology than the Americans. As a matter of extreme urgency, they need to find a way of safeguarding their most vital secrets.

Perhaps this means unlearning some of the lessons of 9/11. Intelligence-sharing in the age of terror was meant to mean that if you had a suspicious person in Detroit who moved to Los Angeles, you told the Los Angeles police as well as the FBI. It was not meant to mean an army private, or a technical contractor, had computer access to every diplomatic and intelligence secret of the US government.

Canberra and Jakarta have their own intelligence relationship covering terrorism, people-smuggling, organised crime, and indeed conventional military matters. This relationship is a two-way street. It benefits Indonesia as it benefits Australia.

Much of the mechanics that Snowden has revealed was actually already available, in broad outline, in technical and academic literature.

But the Snowden revelations -- dramatic material, top secret, highlighted in some of the world's most powerful media -- have forced a nationalist reaction from spied-upon countries. This is so even from so mature a democracy as Germany.

In that light, an Indonesian reaction is hardly surprising, but Indonesian government actions are generally mature and driven by enlightened self-interest.

It is unlikely therefore that anything will come of threats to end co-operation with Canberra on counter terrorism and people-smuggling.

This is a tricky, delicate, dangerous moment for the relationship. Abbott and Bishop need to handle this with considerable dexterity. Greg Sheridan for “The Australian”