US defies China with B-52 flight over disputed islands 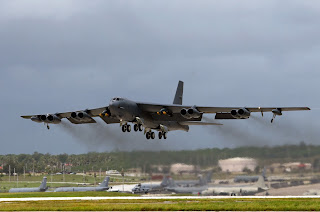 Two unarmed US B-52 bombers on a training mission flew over disputed islands in the East China Sea without informing Beijing, Pentagon officials said on Tuesday, defying China's declaration of a new airspace defense zone in the region

The flight on Monday night did not prompt a response from China, and the White House on Tuesday urged Beijing to resolve its dispute with Japan over the islands diplomatically, without resorting to "threats or inflammatory language."

China published coordinates for an East China Sea Air Defence Identification Zone over the weekend and warned it would take "defensive emergency measures" against aircraft that failed to identify themselves properly in the airspace.

The zone covers most of that sea and includes the skies over islands at the heart of a territorial dispute with Japan.

"The policy announced by the Chinese over the weekend is unnecessarily inflammatory," White House spokesman Josh Earnest told reporters in California, where President Barack Obama is travelling.

"These are the kinds of differences that should not be addressed with threats or inflammatory language, but rather can and should be resolved diplomatically," he said.

The dispute flared ahead of a trip to the region by Vice President Joe Biden, who is scheduled to travel to Japan early next week and also has stops in China and South Korea. The White House announced the trip in early November.

Two US B-52 bombers carried out the flight, part of a long-planned exercise, on Monday night Eastern Standard Time, a US military official said, identifying the type of aircraft on condition of anonymity.

Pentagon officials said there was no Chinese response.

"We have conducted operations in the area of the Senkakus. We have continued to follow our normal procedures, which include not filing flight plans, not radioing ahead and not registering our frequencies," spokesman Colonel Steve Warren said, using the Japanese name for the islands.

The United States and close ally Japan have sharply criticised China's airspace declaration, with US Defense Secretary Chuck Hagel calling it a "destabilising attempt to alter the status quo in the region." He said on Saturday the United States would not change how it operates there.

Some airlines in the region agreed to begin complying with the Chinese identification measures, which effectively force countries to recognise Beijing's authority there.

But Japan's two biggest airlines - Japan Airlines and ANA Holdings - bowed to a Japanese government request to stop complying with the Chinese demands for flight plans and other information. They will stop providing the information beginning Wednesday, spokesmen for the carriers said.

Experts said the Chinese move was aimed at chipping away at Tokyo's claim to administrative control over the area, including the tiny uninhabited islands known as the Senkaku in Japanand the Diaoyu in China.

While Washington does not take a position on the sovereignty of the islands, it recognises that Japan has administrative control over them and is therefore bound by treaty to defend Japan in the event of an armed conflict.

The Pentagon said the training exercise "involved two aircraft flying from Guam and returning to Guam." Warren said the US military aircraft were neither observed nor were contacted by the Chinese aircraft.

China's Defence Ministry said on Monday it had lodged protests with the US and Japanese embassies in Beijing over the criticism from Washington and Tokyo of the zone.

In addition, China sent its sole aircraft carrier on a training mission into the South China Sea on Tuesday amid maritime disputes with the Philippines and other neighbors and tension over its airspace defense zone.

It is the first time it was sent to the South China Sea.

Australia summoned China's ambassador to express concern over its imposition of an "Air Defence Identification Zone" over the East China Sea, the foreign minister said on Tuesday, decrying the move as unhelpful in a region beset by tension.
Reuters Read more: http://www.smh.com.au/world/us-defies-china-with-b52-flight-over-disputed-islands-20131127-2y8r2.html#ixzz2lsgo09I1