The significance of an apology 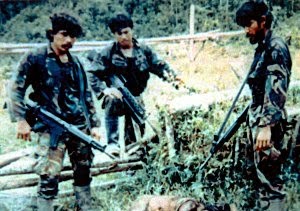 Responding to the allegations of the wiretapping of personal phones belonging to President Susilo Bambang Yudhoyono, First Lady Ani Yudhoyono and several Cabinet ministers, Australian Prime Minister Tony Abbott told his country’s Parliament that “Australia should not be expected to apologize for the steps we took to protect our country in the past”. It sounds quite harsh and cold, indeed.

Yet Abbott’s statement instantly reminded me of the Indonesian government’s response to the National Commission on Human Rights (Komnas HAM), which concluded last year that the purge of communists in 1965-1966 amounted to gross human rights violations.

Since the release of Komnas HAM’s findings, it is not only the Indonesian government that has been reluctant to say sorry. Coordinating Political, Legal and Security Affairs Minister Djoko Suyanto told the media that “the mass killings during the anti-communist purge were justified as they were aimed at saving the country” (The Jakarta Post, Oct. 1, 2012).

I endorse the view taken by former Australian prime minister Julia Gillard that Abbott should follow the example of US President Barack Obama, who apologized to Angela Merkel after it was revealed that American spies had tapped the German chancellor’s phone.

However, being a human rights worker who has learned of hundreds of cases of state injustice, and having lost my own grandfather during the 1960s’ purge of “communists”, I could not help thinking, “How does it feel, Mr. President and ministers, to have your rights violated, but denied such a simple thing as an apology? How does it feel, dear sirs, to be told by a government that it was necessary for them to violate your rights?”
A genuine apology is the minimum measure the government should provide to individuals who have been victims of human rights violations. Compared to legal prosecution, a genuine apology is less complicated and is unlikely to require any financial resources. Apologizing is a simple act and yet, for victims of human rights violations, it is inseparable from justice.

Responding to my question in an interview on what justice means to him, Syamsul Arifin, a victim of fabricated charges and police torture in Surabaya, East Java, said it was part apology and acknowledgement from the perpetrators that what they had done was wrong.

For him and many other individuals affected by the state’s wrongdoings, a genuine apology is indeed as important as the legal prosecution and punishment of the perpetrators.

A genuine apology also benefits more parties than merely the victims of human rights violations and their families.

Whereas for the victims, an apology serves the function of partial justice, for the individual perpetrators it may give them peace of mind and release their feelings of guilt.

Although research concluded by Queensland University this year revealed that not apologizing somehow made people feel empowered, it did not contradict the commonly held perception that an apology makes a wrongdoer feel better.

A genuine apology from the government of its wrongdoings would also benefit society and the country as a whole. Palu Mayor Rusdy Mastura, who did indeed apologize for the anti-communist killings in 1965-1966, rightly pointed out that saying “sorry” was needed “for the nation to build a better future”.

Studies have shown that an apology has the capacity to convert a desire for revenge into a willingness to forgive. The absence of an apology or the acknowledgement of human rights violations, however, can lead to growing resentment among the victims, which could ultimately manifest itself toward the perpetrators — in this case, the state.

Take the complex situation in Papua as an example. The demand for independence from the Papuans is partly rooted in the Indonesian’s government failure to acknowledge and apologize for the historic and ongoing human rights violations in the region; violations that have been carried out since the 1960s. No apology has been offered by the Indonesian government for the state’s bribery and intimidation of Papuans during the preparation of the not-so-free Act of Free Choice in 1969, or for the series of atrocities committed in the Central Highlands in 1977-1978.

Indeed, a recent report released by the Asian Human Rights Commission (AHRC) regarding the violations carried out by the Indonesian Military (TNI) in the Central Highlands was called a “hoax” by local military personnel.

Sometime last year, Yudhoyono was planning to apologize to the victims and their families of the human rights violations perpetrated in 1965-1966. This was prior to Djoko’s insensitive comment from.

As of today, however, no such apology has been offered by the President. Instead, the President is planning to name as a hero the person responsible for the purge, Sarwo Edhie Wibowo — his father-in-law.

Dear Mr. President, I am certainly not relishing the fact that your privacy was invaded and that our national security may have been put at risk by Australian spies wiretapping your personal cell phone. And I am definitely not tipping my hat to Prime Minister Abbott for his cowardice in refusing to say sorry to you and to Indonesia.

I am, however, sincerely hoping that, among other things, this incident will teach you a valuable lesson on the significance of an apology for individuals whose rights have been violated.