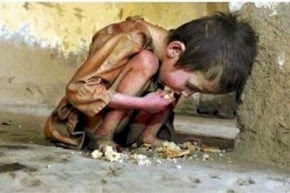 On a dusty street curb in Jakarta, a mother holding her crying baby sells gasoline for a profit of Rp 500 (4 US cents) per liter. Thousands of cars pass by every day and the baby breathes in the polluted air. His eyes are swollen, wet, yellow and move slowly before the shining sun. His cries stops with a sleep resulting from sheer exhaustion.

On my way to Mangga Dua that day, I could not erase two things from my mind: the baby would die soon because of respiratory and infectious diseases, typhoid, hepatitis or diarrhea or he would live a life of misery.

Yet, perhaps, there is the hand of God, that if he wishes he will come and help mysteriously.

Welcoming Heroes Day on Nov. 10, we again deserve to ask whether this was what the founding fathers thought independence would be. However liberal any of them might be in politics or economics, I do not for one second believe they would look on this scene without tears.

Until now, I was never convinced that the generals or first-ranked civil servants in their luxurious cars would care about the suffering baby and so many others like it. They might have seen the facts along the streets.

Yet, their race to gain more and more wealth has made them forget what the late Indonesian Military commander Gen. Sudirman lived for in his relatively short life: the courage to live simply.

It also looks naive to think that the middle class or wealthy people will think about the baby and other thousands of unfortunate street kids. If they do, they might easily erase it as an unwanted stain that would disturb their comfortable life.

When Ebenezer Scrooge was asked to give alms for the poor in A Christmas Carol, written by Charles Dickens in 1843, the heartless banker said the destitute should head for the workhouses or prisons. And if they would rather die than go there, “they had better do it and decrease the surplus population”.

Should we also say that the above baby and thousands others are the surplus that do not deserve to live as others do? By what reason can we accept, for example, that whoever enjoys the fruits of the heroes’ sacrifices deserves to play expensive sports, while the amount of money spent can support the lives of hundreds of destitutes in a day?

What logic is there to agree that a billion rupiah government car is proper in a state where millions live in overwhelming poverty? What kind of heroes decided this to be fair?

In 1798, Thomas Malthus explained how the (unfortunate) world population would face a calamity related to overpopulation. Malthus then advocated against food relief for all but the poorest of people, since he felt such aid encouraged more children to be born into misery. He talked about how war, famine and disease would be involuntary checks on population.

Celebrating Heroes Day, we have to ask, will we just accept Malthus’ irony and continue with this fraudulence?

Can’t we shift to the likes of Mahatma Gandhi: “Earth provides enough to satisfy every man’s need, but not every man’s greed?” Or to what the late Rachel Corrie told us when she was 10 years old in 1990:“We have to understand that the poor are all around us and we are ignoring them”?

To our sadness, instead of listening to Gandhi or our caring heroes, many of us seem to unconsciously take natural disasters or bloody conflicts as population checks. We seem to not care even though in the rivers near conflict sites a researcher has noted that “people eat fish and fish eat people.” Poverty, natural disasters and conflicts are taken as commodities for gaining more popularity, upward mobility or political opportunities.

Robert A. Heinlein wrote in his novel, The Moon is a Harsh Mistress, “This planet isn’t crowded; it is just mis-managed […] and the unkindest thing you can do for a hungry man is to give him food. Read Malthus. It is never safe to laugh at Dr. Malthus; he always has the last laugh.”

We are surely here just to take the statement “it is just mis-managed” and leave all pessimism behind.

Former vice president Mohammad Hatta told us that we should not use the term “pemerintah” to represent “government” but “pengurus”, a word originating from the root “urus”.

Hatta’s choice of term principally means to provide services to the people, diametrically different from the word “perintah”, which originated from despotic political system, which means “direction” or “order.” Hatta’s idea is absolutely in line with democracy.

With this in mind, we have to make everybody stop and think that there are kawula (the servants) and gusti (the masters) as in the ancient state of authoritarianism. All deserve to live and their prosperity is guaranteed by the state. Its knowledgeable and caring civil servants — the police and soldiers included — could be the real new heroes.

If not, we, as a nation, will remain under the spell of Malthus’ irony. And our celebration of Heroes Day would only be expensive military shows, senseless speeches and unanswered prayers.

Khainil Azhar is a researcher at Paramadina Foundation, Jakarta.