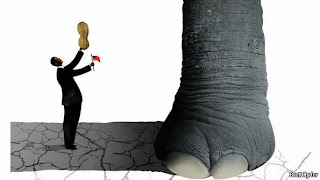 India’s National Food Security Act is now a fait accompli. The United Progressive Alliance, desperate to maximise its electoral prospects, successfully ensured its passage through parliament in September. But the Act, with its exclusive focus on food grain and cereal availability, may well end up hurting the poor on two major counts. First, it will discourage much-needed diversification in the agricultural sector and aggravate the country’s shortage of proteins, dairy, fruits and vegetables, whose consumption would help redress malnourishment — the real problem India faces today. Second, the huge increase in centralised procurement of food grains will end up raising their market price, and the real poor, many of whom remain outside the leaky public distribution system, will suffer the consequences. But a more careful reading of the Act reveals other costs that will ultimately have to be borne by the aam aadmi, or average Indian citizen.

Proponents of the Act too easily dismiss concerns about the fiscal burden it will place on the state. The fact is that the costs of implementing the Act are truly staggering. One estimate, which has not been challenged by any of the Act’s supporters, places the cost of implementing the scheme in its first year at Rs 2.4 lakh crore, declining to Rs 2.2 lakh crore in the third year. A more conservative estimate, which does not include the infrastructure and logistics costs of implementing the Act, still came up with an estimate of Rs 1.4 lakh crore in the first year, rising to Rs 1.6 lakh crore in the third year. To say that the Act is simply a restructuring of existing public distribution schemes and that it will not raise the country’s fiscal burden is disingenuous at best. These figures are huge; they amount to 1.5 per cent of GDP at the bare minimum and 2.4 per cent of GDP at the higher end. This will double the total subsidy bill and put extraordinary pressure on India’s fiscal balance.

This fiscal profligacy will affect the poor in three further ways. First, they will suffer from inflation — the necessary consequence of fiscal expansion and the attendant leakages, which are estimated to reach at least 40 per cent of the total bill. Second, in an attempt to keep the fiscal deficit within budgetary targets and still make room for additional outlays on the Act, severe cuts have been imposed on expenditures in other ministries and departments. These are slowing down infrastructure projects and even hurting the banking sector, as several large borrowers are unable to service their loans due to slower progress on their projects and delayed payments. The poor are the worst affected by the infrastructure deficit because they do not have the means to find private solutions to the lack of necessary public services.

And, third, with the government borrowing more from the market, the upward pressure on market interest remains high and prevents capital costs from coming down. The consequence is a continued investment drought resulting in a further slowdown of economic growth and the drying-up of employment opportunities. Here, too, the worst affected will be the poor.

But it doesn’t end there. Section 15 of the Act provides for the creation of a new position in each district: the district grievance redressal officer. Section 16 requires state governments to establish a State Food Commission, with a chairman, five other members and an officer of the state government acting as secretary. And Section 29 mandates the establishment of Vigilance Committees at the state, district, block and fair-price shop levels. For a government so badly strapped for cash that is substantially cutting down the country’s defence outlay, this is an inexcusable waste of public money to create hundreds, if not thousands, of new government positions for such vaguely defined roles.

There is, however, one provision in the Act which may nullify all its good intentions. Section 44 provides for an important caveat, reading: ‘The Central Government, or as the case may be, the State Government, shall be liable for a claim by any person entitled under this Act, except in the case of war, flood, drought, fire, cyclone or earthquake affecting the regular supply of foodgrains or meals to such persons under this Act’. This provision implies that the Act will not be operational in emergencies, when the potential beneficiaries are most vulnerable and require the greatest help.

This is a deeply flawed Act. It has the potential to wreck the country’s fiscal balance, slow down the economy, and lead to severe distortions in both the production and marketing of agricultural output. One hopes that India will somehow pull back from the precipice.Rajiv Kumar is a senior fellow at the Centre for Policy Research, India.