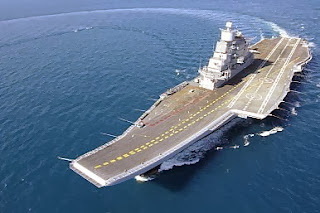 The handover ceremony of the 44,570-tonne carrier is sure to have generated more than a passing interest within the PLA Navy and across the rest of the continent, since India will be the only country in Asia to have two aircraft carriers in its fleet. Admittedly, the 55-year old INS Viraat is “long in the tooth” as India's Navy Chief Admiral D. K. Joshi himself described it in a recent interview, but it will continue to operate until India's locally built carrier INS Vikrant becomes operational by 2017.

At the moment, only the U.S. Navy brings that sort of capability to Asia. Although it is coming five years late – the original delivery was scheduled for 2008 – the Vikramaditya will give India the ability to project raw naval power in its “near abroad” as well as in its extended neighborhood. With a capacity to carry two dozen Mig-29 K fighter jets and 10 Kamov helicopters at any given time on board and fitted with the latest sensors and missiles, the brand-new aircraft carrier will boost the Indian Navy's firepower significantly.

But the Vikramaditya is not the only reason why the Indian Navy feels upbeat about its future capabilities. Naval aviation, long treated as a poor cousin of surface combatants in the Indian Navy, is exhibiting some new chutzpah of late. Days before Defence Minister AK Antony and flew to Russia with Joshi, the nation’s Defence Acquisition Council approved the purchase of four more Boeing P8I maritime patrol and antisubmarine aircraft in addition to the eight already contracted. The first of these eight planes was in fact parked at INS Dega airfield for everyone to see when Joshi formally inducted the newly acquired Advanced Jet Trainers Hawks into the Navy, to take training of Naval fighter pilots to the next level. The second P8I landed in India on November 15.

INS Dega, a small air station under Eastern Naval Command, is set to become Indian Navy's biggest air base on the eastern seaboard soon. The expansion of air assets in the East is just one of the several plans that the Indian Navy has unveiled to strengthen its presence in the Bay of Bengal and support India's “Look East Policy.” The P8Is are set to replace the hardy but old Soviet-made Tu-142 M aircraft that have been the backbone of the navy's long range maritime patrols – with flights lasting up to 16 hours at a stretch. The P8Is are expected to play a major role in the Navy's  surveillance role in the Indian Ocean as well as Malacca Straits.

As Joshi told this writer in an interview for Indian broadcaster NDTV on board INS Jalashwa, the navy's biggest amphibious ship: "The first P8I has already arrived and is in the process of being accepted. Various acceptance trials are in progress and by the end of the year we will have three of them and others following in quick order next year. That brings into this region a capability that has not existed before. It’s a brand-new aircraft, apart from the platform which in any case is a proven Boeing aircraft. The fit has been to the specification the US Navy currently has. So therefore the capabilities that are coming into our hands are absolutely state of the art."

Another capability the Indian Navy quietly added earlier this year was a dedicated communication satellite for its exclusive use. The satellite is expected to fully stabilize by the end of December. Launched with the help of the Indian Space Research Organisation (ISRO), the naval satellite is described as a force multiplier by senior naval officers. It covers the Navy's entire area of interest in the Indian Ocean and beyond. The satellite handles all data transfers for maritime domain awareness and the entire range of communications and networking needs of the Indian Navy. "It brings an entirely new dimension in network operations and in maritime operations," Joshi told this writer a fortnight ago, speaking about the satellite for the first time in the public domain.

In fact, but for an accident on board a refitted conventional submarine, INS Sindhurakshak that killed 18 sailors and sank the boat after an unexplained explosion in Mumbai harbor, the Indian Navy could have celebrated 2013 as one of its most significant years in terms of ramping up its capabilities. For instance, the nuclear reactor on India's first locally built nuclear-powered submarine, the INS Arihant went “critical” in August, marking a major milestone in India's effort to acquire a credible nuclear triad. One more year of sea trials will allow the Arihant to become operational by the end of 2014. With at least three more locally manufactured nuclear submarines in the pipeline, the Navy is hoping to overcome one obvious weakness in its arsenal: depleting submarine strength.

The force levels of conventional submarines is down to the single digits and with delivery schedules for two building projects running way behind time, naval headquarters is naturally worried about its submarine arm. Joshi admitted as much: "Submarine-force levels I agree with you are under strain," he said, not wanting to sound too alarmist. He also hastened to add that by 2017-18 the two major submarine building projects will be back on track.

The big picture is indeed positive for the Indian Navy. Its long-term Maritime Capabilities Perspective Plan had identified a mix of two major roles for the force: One, the traditional blue water operational capability and two, a plan to effectively counter threats closer to the coast. It is steadily working towards achieving that objective.

In April 2012 a new naval base, INS Dweeprakshak (Island Protector) was put into operation at Kavaratti in Lakshawadeep, the tiny island chain, southwest of mainland India. Although the Indian Navy has had a small presence on the strategically important islands for the past decade, its decision to open a permanent base emanated from recent incidents of piracy very close to these islands. The Navy has captured at least 100 pirates and foiled several piracy attempts in this area in recent times.

The Navy is also in the process of setting up Operational Turn Around (OTR) bases, Forward Operating Bases and Naval Air Enclaves along the coast, which would enhance the reach and sustainability of its surveillance effort on both the coasts. In 2011, the Navy focused on creating operational and administrative infrastructure in the Andaman and Nicobar Islands and the Lakshadweep and Minicoy Islands, considered the country's strategic outposts.

Given the extensive plans presented to parliament, it is evident now that the Indian Navy is in the midst of its most ambitious expansion plan in the past three decades. Senior officers point out that the Indian Navy's perspective-planning in terms of force-levels is now driven by a conceptual shift from numbers of platforms – that is, from the old bean-counting philosophy – to one that concentrates on capabilities.

As the Indian Navy Chief pointed out in our interview: "The navy has great reach and sustenance. Long sea legs. We can reach out to distant waters, and sustain ourselves, bring our combat potential to where it is so required." With strategic planners predicting future conflicts in the Indo-Pacific, the Indian Navy's rising profile will be keenly watched across the region and beyond.
Nitin Gokhale is Defence & Strategic Affairs Editor with Indian broadcaster, NDTV 24×7.