Russia and Vietnam taking it to the next level 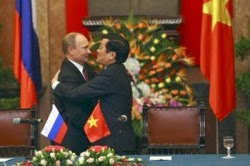 Vladimir Putin’s visit to Vietnam earlier this month, his third since assuming the Russian presidency, was accompanied by references to the ‘comprehensive strategic partnership’ between both countries. This wording has been adopted since last year, clearly indicating that the two countries are getting closer to each other and intend to cultivate a special bond

The intensity of high-profile diplomatic activity seems to confirm this. Since July 2012, the two countries’ presidents have met each other no less than four times, while Prime Ministers Dmitry Medvedev and Nguyen Tan Dung have also exchanged visits.

Against this background, bilateral trade statistics look rather modest: according to Russian sources bilateral trade turnover, although increasing by 20 per cent in 2012, reached only US$3.6 billion — a level much lower than Vietnam’s trade with partners such as China and the United States. Even if, according to official projections (and as a result of a free trade agreement currently under negotiation between Vietnam and the countries of the customs union of Russia, Byelorussia and Kazakhstan), trade rises to US$7 billion in 2015 and US$10 billion in 2020, Russia will still be well behind Vietnam’s biggest trade partners.

One may wonder why Vietnam, famous for its pragmatism, is approaching Russia with such a positive attitude. From Vietnam’s point of view, what is so attractive and promising about this partner?

In the Vietnamese psyche Russia is not associated with any kind of existential threat — economic or military. Unlike some other great powers, Russia carries no responsibility for the tragedies of Indochina wars. On the contrary, through Vietnam’s decades of turmoil the USSR proved to be a tested (and generous) friend — including during the Cambodian–Vietnamese War. Much of the positive chemistry between the Russians and the Vietnamese was generated back then, and this mutual sympathy remains a major ingredient in the relationship.

Since so many Vietnamese not just operated Soviet/Russian military equipment but also studied in the Soviet Union/Russia, they are more aware of Russia’s soft power too — its educational, technological, scientific and cultural richness — which has influenced positive attitudes to Russia among Vietnamese.

While much of the world remains skeptical about Russia’s business climate, there are examples of Vietnamese who were educated in Russia and raised considerable fortunes there before making it big at home. One famous case is that of Pham Nhat Vuong: the first tycoon of modern Vietnam to enter the Forbes list of the world’s richest people, worth an estimated US$1.5 billion.

Looking at the set of agreements and memorandums signed during Putin’s latest visit, one will note that it covers a rather wide range of subjects. These include a series of joint ventures and huge projects in the field of hydrocarbon energy, construction of the first nuclear power plant in Indochina, educational and innovative initiatives, and healthcare. A new agreement on military cooperation is also included, and the package looks like a foundation on which the partners intend to construct a more diversified system of linkages.

Judging by the joint statement on the talks, there was quite a substantial discussion on issues of regional and global importance. Along with the new architecture for regional security and cooperation, issues as sensitive as Syria and the South China Sea were also discussed. Consistent with previous negotiations, the leaders of Russia and Vietnam stated that all territorial disputes in the Asia Pacific should be settled only by peaceful means, without the use or the threat of force, in accordance with the UN Charter and UNCLOS 1982. The strong support of a political and diplomatic solution to the Syrian crisis by both presidents was quite predictable, as was their common appreciation of ASEAN’s centrality in the emerging regional architecture.

If ‘comprehensive strategic partnership’ stands for a relationship with deep historical roots, and growing closeness built on similar regional and global perceptions, then the Russia-Vietnam partnership deserves this definition. Dr Victor Sumsky is Director of the ASEAN Centre at MGIMO University, Moscow.