Banking and organised crime in Japan 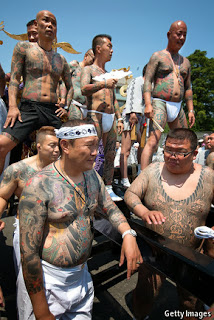 A Japanese bank wrestles with lending to gangsters

A LUXURY fridge worth ¥200,000 ($2,000) was one of the goodies that yakuza gangsters bought with loans from a consumer-finance arm of Mizuho Bank. Mostly it was flashy used cars, bought at inflated prices and quickly sold on. Mizuho, whose parent, Mizuho Financial Group, is Japan’s second-biggest lender by assets, turned a blind eye to the loans, but did not mount a full cover-up, concluded an internal investigation this week. On October 30th Japan’s financial watchdog said it would inspect Mizuho and two other big banks to hunt for loans to yakuza.

It was around 2010 that Mizuho discovered some 230 gangster-linked loans, worth more than ¥200m, on the books of a small subsidiary, Orient Corporation. It said nothing to the authorities. Since the scandal became public in September, the firm has admitted that the loans came to the attention of senior staff, including a former chief executive, without triggering any response.
The bank’s main defence is that safeguards against loans to suspect customers failed because of its complex structure. It was formed in 2002 from a series of mergers. Although the main bank keeps a list of several thousand known gangsters with whom it will not do business, Orient had far less stringent checks, and divisional rivalries had prevented harmonisation. “We take very seriously the possibility that our money can go to antisocial forces,” says Riichirou Tanaka, a spokesman.

Mizuho had special reason to be on its guard. In 1997 the Daiichi Kangyo Bank, absorbed by Mizuho in 2000, was found guilty of extending illegal loans to a “sokaiya” racketeer. These lesser cousins of the yakuza extract tens of millions of yen from companies in return for not disrupting annual meetings. The scandal led to the arrest of Daiichi Kangyo’s president and the resignation of top executives.

No such fallout is likely this time. Yasuhiro Sato, the current chief executive, will keep his job. The bank will not be fined. Mr Sato and more than 50 senior colleagues will take a brief cut in pay. The bosses failed “to appreciate the gravity of collaborating with organised crime”, said the investigation, but they did not actively try to conceal the loans.

Yakuza operate much more openly than their counterparts in other countries. Crime syndicates have offices registered with local public-safety commissions. Membership is not in itself a crime. The biggest and richest group, the Yamaguchi-gumi, shelters behind a high-walled compound in a grand neighbourhood of Kobe.

In recent years the authorities have attempted to undo this tolerance. That may have pushed many gangsters away from extortion and racketeering into harder-to-uncover financial activities. They are suspected of manipulating initial public offerings during the dotcom boom, for instance. The authorities have responded with yakuza-exclusion ordinances, introduced two years ago, which bar firms from knowingly doing business with gangsters. Mizuho’s troubles suggest they are needed. “The Economist”
Posted by Kerry B. Collison at 1:20 PM