Grim reminder: One of three railway cars thought to have been used in the Gerbong Maut

incident is on display at the Brawijaya Army Museum in Malang.

Sixty-six years ago today, Nov. 23, tragedy struck the people of Bondowoso in the farthest reaches of East Java.

About 150,000 freedom fighters and civilians – and 6,000 Dutch soldiers – died in the prolonged conflict between 1945 and 1949, euphemistically labelled ‘a police action’ by the archipelago’s former controllers.

However, the descendants of 46 men from Bondowoso who were cooked to death in a railway wagon a month earlier have yet to be recognized.

The issue has been raised with Liesbeth Zegveld, the Dutch lawyer who drove the Rawagede compensation case. She’s passed it on to the European Nuhanovic Foundation, which specializes in war reparation cases.

This is the story of the Gerbong Maut, the Corpse Train.

According to Soetedjo, one of the survivors who gave his story to Dutch researchers, the men were prisoners who’d been arrested on suspicion of being revolutionaries.

They were scheduled to be shifted to the Kalisosok Prison in Surabaya about 250 kilometers distant, allegedly because the local jail was overcrowded.

On the morning of Nov. 23, 1947, about 100 men in the Bondowoso prison were woken at 5 a.m. and marched to the railway station. Twenty-four were stuffed into the first windowless freight wagon and 38 each in the remaining two. 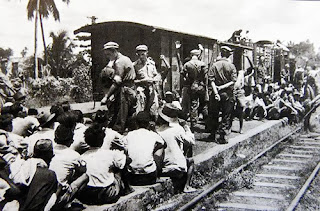 The floors of the cars were made of timber and the roofs of corrugated iron. There were no benches. The doors were sealed and the train got underway around 7:30 a.m. The day was typically scorching.

Revolutionary propaganda images show the men being brutally herded into the three boxcars. However a photo suggests it was a relatively routine maneuver, with the soldiers – some seemingly unarmed – appearing relaxed.

Whatever their demeanor, the guards were inexperienced. At the time, there were around 100,000 Dutch soldiers in Java. Many were conscripts with little heart for the job of overturning president Soekarno’s declaration of independence.

The plan to re-colonize Indonesia had been internationally unpopular at the time and opposed by recently de-colonized India and many Western nations. Meanwhile, in Holland, public opinion was split on the value of trying to regain sovereignty of the East Indies.

When the train stopped at sidings along the 16-hour journey, the prisoners hammered the walls and shouted for food and water. They were told only bullets were available and nothing would be supplied until the train reached Surabaya.

Eventually the cries became faint, but even this didn’t move the Dutch soldiers to investigate. Sometime during the awful journey a man in the middle car using a spoon managed to scrape a hole in the planks to get more air.

During the afternoon it rained and some drops leaked into the first two cars, though not the more recently built end wagon.
That night the doors were opened. All the men in the first car were alive though some were seriously sick. In the second car, eight were dead. In the final wagon noone had survived.

Of the 100 men only 12 were fit enough to help their mates and move the corpses. The others were taken to the hospital.

“The victims were cooked, as in an oven,” recalled Soetedjo. “When we saw their bodies, their skin was off and appeared to be white.

“There were visible traces of blood from their mouths and ears and eyes. Their tongues were out. It’s something I’ll never be able to forget. We put 46 bodies on the station platform at Wonokromo.”

At the soldiers’ trial in July 1948 it was revealed that the transport arrangements had been entrusted to Arie Jippes, an inexperienced soldier in a marine brigade who’d never had an operational role. He was suddenly given the job, papers thrust into his hands, just as he was leaving Java at the end of his service.

Dutch author Ad van Liempt wrote that Jippes’ “guilt never left him” and that “it ruined his life”. He was sentenced to two months in jail. His commander was never prosecuted.

However in Pakisadji, close to Malang, three Dutch soldiers who refused to retaliate against Indonesians on moral grounds were jailed for more than two years.

Six students from Petra University in Surabaya, directed by graphic arts graduate Sherly Jessica, have produced three You Tube videos about the tragedy.

These have helped rekindle local interest. In 2012, a group of students in Bondowoso re-enacted the tragedy in a bid to keep the memory of the men alive and to inaugurate Gerbong Maut Day.

Jessica said that her team had tried to locate the three railway carriages in which the men died.

Remnants of one weren’t found in the Gedung Juang Surabaya museum scrap yard.
It hasn’t been displayed because its authenticity has been questioned. Another is in the Brawijaya Army Museum in Malang, and reasonably well preserved, though not treated with respect as visitors are allowed to climb over the exhibit

This is believed to be the newest box car, so may be the one where all the men died because the planks would have made an airtight fit.

The other is missing, although there are rumor sit might be in Surakarta, Central Java.

Jessica said that the carriage used to make a statue in Bondowoso – described by Dutch academic Gerben Nooteboom, who did field work in the area, as a ‘pathetic monument made from blackened brass’ - is a replica.

“We went to Bondowoso and interviewed a few people, but they kept silent,” Jessica said. “The people said it was a secret that they couldn’t tell to strangers. It’s my belief that there are still some untold stories, yet to be discovered regarding the wagons and their connection with the prison.”

“We as the young and caring generation of Indonesia want to bring this Gerbong Maut tragedy to a whole new level.

“We want to make our own generation – and future generations to come, to know the truth and learn from it.” By Duncan Graham, contributor, East Java