5 Reasons the Philippines Is So Disaster Prone 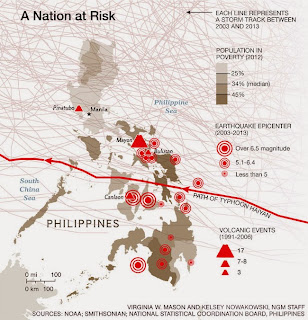 The unofficial death toll for Super Typhoon Haiyan is expected to exceed 10,000 people in the Philippines, but the country is no stranger to catastrophic natural disasters. From earthquakes to volcanic eruptions to previous super typhoons, death tolls following cataclysmic events in the Philippines tend to be high. Here are 5 reasons why: 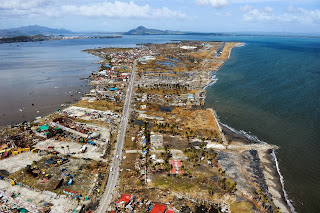 1. Warm Ocean Waters
Located just above the equator, the Philippines faces the western Pacific without much else in the way to take the force of storms before they make landfall. Those warm, equatorial waters power storms, about 20 typhoons a year. (See related, “Typhoon, Hurricane, Cyclone: What's the Difference?”)
"It has the warmest ocean temperatures in the world. We call it the warm pool around Indonesia and the Philippines," says atmospheric scientist Colin Price of Israel's Tel Aviv University.
"You need temperatures above 28°C (82.4°F) for typhoons to form. In the western Pacific, the water's normally above 28 degrees," Price says. (Related: "Rising Temperatures May Cause More Katrinas.")

2. Coastal Homes
A lot of people live on low-lying coastal islands in the Philippines, with more than 60 percent of the population living in coastal zones, according to World Bank estimates.
Storm surges for landfall of Super Typhoon Haiyan reached 23 feet (7 meters) in some places and were more than 16 feet (5 meters) high.
Those waves rolled over low-lying parts of populated islands such as Leyte, home to the coastal city of Tacloban, where the BBC estimates more than 10,000 people alone died.
3. Deforestation
In past typhoons, mudslides have killed many storm survivors in the Philippines, notes meteorologist Jeff Masters of the Weather Underground website.
Hillsides denuded of trees have fewer roots to hold them together, which can lead to mudslides when they are hit by sudden huge outbursts of rain.
Deforestation has caused similar problems in places such as Haiti, where mudslides were triggered by rainstorms. The soil clogged waterways, causing stagnation later linked to cholera outbreaks.

5. Underdevelopment
The young, poor population of the Philippines has increasingly shifted to coastal regions, where rapidly constructed housing and inadequate evacuation plans may have played a role in the Haiyan disaster.
Indeed, reports are now emerging that people died in shelters too weak to withstand the storm surge and high winds of the super typhoon.
Over the long term, the Manila Observatory says that the combination of poverty and population shifts puts the Philippines among the Top 10 worldwide nations at risk of coastal flooding. By Dan Vergano National Geographic Jane Lee and Marianne Lavelle assisted with reporting on this story.