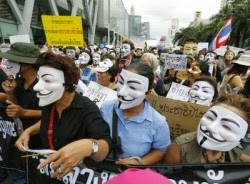 Over the past month, Thailand has made international headlines again as the loose coalition of anti-Thaksinism and anti-blanket amnesty bill demonstrators took to the streets of Bangkok, voicing their discontent ranging from objection to former Prime Minister Thaksin Shinawatra’s return to Thailand, opposition to amnesty for Democrat Party’s leaders who were allegedly responsible for the bloody crackdown on Red Shirt protestors in 2010, to vague disagreement with the powers-that-be and the culture of impunity long entrenched in this Southeast Asian nation.

The amnesty bill – engineered to bring Thaksin back to Thailand in exchange for whitewashing most political crimes on all sides and pushing the “reset” button to end the years of political deadlock that has bitterly divided the country – unexpectedly met with a huge groundswell of organic and spontaneous protest. The protestors include ordinary Thais from all walks of life, not only the so-called elite royalists but also professional as well as lower and upper middle class.

Analysts say this is a miscalculation on the part of the Thaksin camp, who thought they could pass the bill with relative ease now that they have bought the non-intervention of military generals and with the radically conservative Yellow Shirts in disarray. Traditionally, regime change in Thailand has only been possible through military intervention. However, ordinary people under the accidental and opportunistic leadership of the Democrat Party have generated so much noise against the bill that the government of Yingluck Shinawatra, Thaksin’s sister, had to back down and promise not to bring it back to the table after it was shot down by the Senate, quashing once again the hope that Thaksin can finally return home scot-free and victorious.

On paper, it seems that once again the middle class is refusing to play by the electoral rules of democracy. Once again, urban Thai and the Democrats are refusing to let the Pheu Thai party rule despite its electoral mandate. But the truth is more complex that that, largely because the Thaksin camp is seen as unacceptably corrupt. Last week, the opposition Democrat Party upped the ante by calling for acts of civil disobedience, urging people to go on strike, boycott products made by Thaksin’s companies, and carry whistles to blow at Pheu Thai politicians and Thaksin allies.

This was seen as a misstep by the Democrats, after it met with a lukewarm response among many Thais who drew a lesson from the damage done by the Yellow Shirts’ airport seizure in 2008 and who feel that stopping work and halting business is not a reasonable option. The Democrat Party’s opportunistic attempt to raise the stakes betrays its plan to uproot the Thaksin regime once and for all by riding the current wave of mass discontent against Thaksin and the Pheu Thai Party. What is unclear, however, is how long such a movement can be sustained.

Apart from calling for continued protest, nine Democrat Party politicians resigned from parliament, signaling that they want to take the extra-parliamentary route as the party prepares to impeach Pheu Thai MPs and file a censure motion against Prime Minister Yingluck Shinawatra in the coming weeks. Overall, the focus on sustaining the demonstration and cutting short the life of Yingluck’s elected government shows the total disdain on the part of many Thais for a parliament that passed an amnesty bill 310-0 vote with four abstentions in the wee hours on November 1, an action widely seen as sneaky and dishonest.

The perpetual paradox of Thailand’s politics, therefore, is that electoral victory is not seen as bestowing legitimacy. In mature democracies, this refusal to accept parliamentary decisions is rare – it would seem preposterous – but in a dysfunctional democracy like Thailand, it has increasingly become the norm. Regardless of its status as legitimate government, the current proxy administration, with Thaksin as puppet master, is perceived as lacking the moral authority to govern the country given its “corrupt” image.

This begs a difficult question: Should a democratically elected government be allowed to continue a corrupt rule with impunity? And to what extent can it continue without succumbing to some sort of intervention, either military intervention or popular protest? In this particular case, do these whistle-blowing demonstrators have the right to oust an elected government, given that their assumptions and beliefs are not without the bias of self-righteousness or moral judgment? And ultimately, should popular protests be recognized as a way to call for a change of government? ‘The Diplomat’