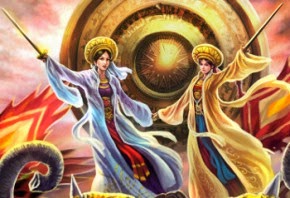 A new arts complex in Hanoi reveals a generational shift

When artists wanted to paint in 1980s Vietnam, they had to submit a sketch to the authorities. If it was approved, they got three tubes of paint: two red, one blue.

By the time Nguyen Qui Duc returned to Hanoi in 1989 from more than a decade in the U.S., those times seemed to be over. The Vietnamese government had recently introduced the Doi Moi (“Renovation”) policy and the strict state-controlled economy was slowly loosening up. “There was an openness,” the cultural entrepreneur tells me. “Writers were able to write about the war and the circumstances of society. People were talking about the bonds that tie artists together.”
Still, despite these major social shifts, the arts scene remained nascent and underground. Even with the introduction of the Internet in the early 2000s, which opened up the country to global trends, Vietnam itself lacked cultural innovation.

Until this year, when several artists and creative entrepreneurs, led by Duc and interior designer Tran Vu Hai, turned a Soviet-era pharmaceutical factory in Hanoi into an arts complex. Like Beijing's 798 Arts District, the industrial setting provides a space for experimental galleries, cafes and bars. It’s also the first signal that Vietnam is moving away from the blatant consumerism that characterized the years since Doi Moi towards a more internationally aware “post-materialist” culture.

“There were so many people looking for a place like this,” says Hai, who owns Bar Betta Republic, one of the first venues to open in the complex along with Duc’s bar and creative space Tadioto. “Before Zone 9, all the different arts spaces were spread around the city. Now this zone has become a center for art — and as a byproduct of that, it’s also become an entertainment center.”

Hai had been looking for “a big old factory” for several years when he found this complex. At the time, it was being used for storage. But when the owners moved away, he, Duc and other cultural entrepreneurs secured rights to the space. Within a matter of months, they transformed the derelict factory complex into what local arts and culture blog Hanoi Grapevine has called “one of the hottest spots in town.”

After Hai opened Bar Betta and Duc moved Tadioto into the empty buildings, they encouraged others to do the same. When British artist Dorian Gibb was looking for a studio (“He couldn't find anywhere to rent that he could make a mess in,” his partner Claire Driscoll recalls), Duc suggested Zone 9.  Driscoll and Gibb turned the top floor of one of the old factory buildings into Workroom Four, a creative space that hosts exhibitions and workshops as well as studio space. Nha San Collective, an experimental arts venue forced to close in 2008 after a nude performance attracted attention from the authorities, also reopened in Zone 9.

“Here in the factory, we can make things from zero and do whatever we want to do,” says Nguyen Quoc Thanh, the conceptual photographer who runs Nha San.

Painter Nguyen Xuan Dam opened his own gallery, Kenke Art Space, for the same reason. “When I came here four months ago it was all a mess, very dirty. There were a lot of rats,” Dam says. “But there was something new and exciting about it. I think it's really interesting that artists made a place to come together.”

As in cities from Berlin to Beijing, the industrial architecture and cheap rents that initially attracted artists also appealed to entrepreneurs. Pham Duc Thang opened Hiker Coffee Shop, the complex’s first cafe, after seeing pictures of Zone 9 on Facebook.

On my first visit in June, Zone 9 was still mostly deserted. A car wash took up almost as much space as the studios. Six months later, the car wash remains, but it’s surrounded by boutiques, cafes and facilities offering Zumba classes and wedding photography. In the gap between two buildings sits one of Hanoi’s first waffle shops.

“When I first set foot in Bar Betta, I knew I wanted to have a shop in Zone 9,” Wunder Waffel owner Duong Anh Minh recalls. “There’s a sense of freedom here. It’s so creative. It’s a unique thing for Vietnam.”

That “uniqueness” has brought together insiders and outsiders, Vietnamese and expats, like no other space in the city.

“Westerners come here as well as locals. There's no border. The people coming to Zone 9 are 50 percent foreigners and 50 percent Vietnamese. That doesn’t happen anywhere else,” Hai says.

In barely two months, news of the complex spread far beyond the art community. Zone 9’s Facebook page currently boasts more than 22,000 likes; for comparison, the Vietnam National Museum of History page has barely scraped 2,000. Hai estimates that more than 1,000 visitors come to Zone 9 on a weekday, and double that number on a Saturday or Sunday. In October, the government-run English-language newspaper referred to the complex as the city's "new art hub" – the ultimate sign of mainstream acceptance.

“It happened really fast,” Driscoll says, still sounding a bit dazed. “We were just thinking about what we were going to do with the space. We didn’t think it was going to develop so fast.”“The Diplomat”