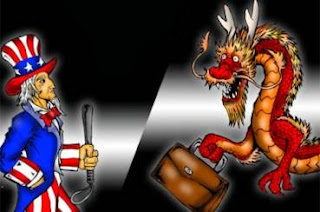 A lengthy report released last week by the US-based think tank, the Centre for Strategic and Budgetary Assessments (CSBA), provides a detailed assessment of Australia’s central strategic role in the Pentagon’s preparations for war with China. The report’s title itself—“Gateway to the Indo-Pacific: Australian Defense Strategy and the Future of the Australia-US Alliance”—highlights the critical geographical importance of the Australian continent for US naval and air operations in Indian and Pacific oceans in any war against China.

The CBSA bills itself as independent and non-partisan, but is closely connected to the American military establishment, receiving the bulk of its funds through Department of Defense research projects. It was prominently involved in drawing up the Pentagon’s AirSea Battle strategy for war against China—a devastating missile and air attack on the Chinese mainland aimed at destroying its communications and military infrastructure, supplemented by an economic blockade to cut off vital Chinese imports of energy and raw materials from Africa and the Middle East.
The US military build-up in the Indo-Pacific region is an integral component of the Obama administration’s “pivot to Asia”—an all-sided diplomatic, economic and strategic offensive aimed at undermining Chinese influence throughout the region and encircling China militarily. Australia’s importance was underscored when Obama chose to formally announce the “pivot” or “rebalance” in the Australian parliament in November 2011, and signed an agreement to station US Marines in the northern city of Darwin and open up Australian naval and air bases to American forces.

While the Australian and US governments speak of the American build-up in Asia in benign terms and deny any targeting of China, the CBSA report explicitly identifies China as the chief potential enemy. Other US think tanks have laid out the general strategy behind Obama’s “pivot”, but the CBSA report is the first to focus exclusively on Australia’s military importance. As it explains, “Australia has moved from ‘down under’ to ‘top centre’ in terms of geopolitical import. For the first time since World War II, Australian and American areas of strategic priority overlap. The strength of this rekindled convergence suggests that the US-Australia relationship may well prove to be the most special relationship of the 21st century.”

The CBSA later states: “The United States’ decision to rebalance towards Asia has had a sizeable impact on the Australia-US alliance… Australia’s strategic geography, well-trained armed forces, and highly regarded intelligence complex renders it an increasingly invaluable partner to the United States. Much as Washington’s close alliance with London provided the United States with a strategic vantage point over Europe throughout the troubled 20th century, America’s strong ties with Australia provide it with the means to preserve US influence and military reach across the Indo-Pacific.”

The report pinpoints the vital functions that US imperialism will require of Australia and its military forces in any conflict with China, including specific details of bases, infrastructure, and complementary Australian weaponry needed to support American operations in the Indo-Pacific. These are grouped under four headings:

* Supportive sanctuary: “As American forward bases in the western Pacific become increasingly vulnerable to Chinese missile threats, the Australian continent, with its solid infrastructure and local technical expertise, could fulfil an important role as logistical hub and bastion for the alliance,” the report states.

The CBSA notes the lack of regional US bases other than Guam in the western Pacific and Diego Garcia in the Indian Ocean. Australia, it states, represents “something of a geographic ‘sweet spot’”—outside the reach of Chinese missile forces but relatively close to potential theatres of action in the South China Sea and “choke points” through the Indonesian archipelago: the Malacca, Sunda and Lombok straits. The report identifies air bases in northern Australia and the Stirling naval base near Perth in Western Australia as critical for US air and nuclear submarine operations. Such bases, however, would need to be significantly upgraded to support “high tempo” use in times of war.

* Indo-Pacific Watch Tower: The report notes the very close collaboration of the US and Australia in intelligence/surveillance throughout the Indo-Pacific. This includes the use of long-range, over the horizon radar “allowing Australia to monitor key maritime chokepoints and sea lanes to its north,” and electronic spying from bases such as Pine Gap, as well as agreement to establish a space surveillance radar in Western Australia. The CBSA writes approvingly of “Australia’s signals intelligence expertise,” which, as Edward Snowden has exposed, is a vital component of the NSA’s vast global spying operations, and adds that it could become “the foundation of a first-class cyber warfare capability.” The previous Labor government established an Australian Cyber Security Centre earlier this year.

* Green Water Warden: “Australia’s relative proximity to the southern Indonesian archipelago, when combined with the diversity and high level of jointness of its armed forces, mean it could play a vital role policing the Lombok and Sunda Straits,” the report states. It discusses in detail the types of warplanes, warships and weaponry needed to defeat China’s forces and effectively cut off its essential imports of energy and raw materials from Africa and the Middle East. It speaks openly of the military advantages of deploying “forces on Indonesian soil or within Indonesian waters” and points to the need to overcome “Indonesia’s history of non-alignment and continued attachment to neutrality.”

* Peripheral Launchpad: In the event that a war with China extends into the Indian Ocean, the CBSA suggests that the Australian military “could make a useful contribution by leading or participating in operations against isolated Chinese naval task forces in the Eastern and Southern parts of the Indian Ocean.” The report makes a complaint, which runs like a thread through the document, that Australian air and naval forces lack the range necessary to carry out long-distance missions. It again raises the call made repeatedly by US officials, including the former US ambassador to Canberra Jeffrey Bleich, for Australia to purchase American nuclear submarines, rather than construct its own diesel-powered vessels.

Far from being simply a military document, the CBSA report deals with the differences that have emerged in the Australian political and strategic circles over commitment to the Obama administration’s “pivot.” It points obliquely to the fundamental dilemma facing Australian imperialism, which relies heavily on trade with China, but depends on the US military alliance to prosecute its own neo-colonial interests in the Asia-Pacific.

All the various tendencies identified by the CBSA in “Australia’s ongoing strategic debate” support the US alliance. What the report terms “alliance minimalists,” such as strategic analyst Hugh White, have emphasised the dangers of war and economic retribution by China if Australia too closely associates with the “pivot.” The “alliance maximalists” are personified by Ross Babbage of the Kokoda Foundation, who advocates an Australian military that can “rip an arm off any major Asian power that seeks to attack Australia.” The “incrementalists”—most commentators and politicians—lie somewhere in between. While the classifications employed are rather artificial and misleading, the CBSA report is further evidence that Washington is following, and intervening in, the political debate in Canberra very closely.

The CBSA’s attitude is made abundantly clear by its critical attitude to both the “alliance minimalists” and “incrementalists.” Moreover, the report regards the “debate” as all but over. “Australia has already crossed this strategic Rubicon [of aligning against China], providing the US Marine Corps access to Darwin and sharing intelligence, communications and space surveillance facilities at Pine Gap and Exmouth,” it states. The fact that “Washington’s prime area of strategic concern is [now] located on Australia’s very doorstep” means shared security concerns and “a strategic consensus in Australia” that it must “emerge as more of a maritime power.” This necessitates additional defence spending. The report concludes by outlining the need for “a greater budgetary effort” to purchase long-range warplanes and submarines and vastly expand military infrastructure.

The CBSA report makes for chilling reading. Its detailed analysis of basing arrangements, missile ranges, submarine transit times, aircraft types and infrastructure requirements, as well as the tactics and strategy of battle, underlines the advanced character of the US preparations for conflict with China. The Pentagon is drawing up war plans not for decades into the future, but for the years immediately ahead. Moreover, while the report deals only with a conventional war with China, the authors are well aware of the danger that it will expand into nuclear war.
The report’s candid discussion of US war with China stands in stark contrast to the virtual silence in the Australian media and political establishment, which serves a definite purpose: to chloroform workers and youth about the dangers that they face and prevent the emergence of a powerful anti-war movement in Australia, Asia and internationally, which these war preparations will sooner or later produce.