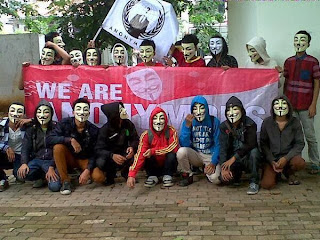 
ASIS focuses on monitoring and gathering intelligence outside Australia while ASIO does the same thing but within Australia.

It’s been about a week after Anonymous Indonesia’s massive cyber attack on Australia happened. The attack – which is done to protest Australia’s alleged spying effort on Indonesia – targeted and defaced over 170 random Australian sites. No Australian government sites reportedly got taken down during that incident.

The Anonymous sub-collective in Indonesia – together with Anonymous groups in other countries – tried to hold a mass gathering of hackers on November 5 during Guy Fawkes Day. Though it had some setbacks, the stunt got the attention of a local TV channel, and it got a hacker group called “Java Cyber Army” to talk on televison.
However, other local hackers didn’t seem to like that somebody claiming to be part of Anonymous appearing “non-anonymously” on TV, and received popularity because of it. Java Cyber Army’s website then got hacked and is still down at the time of writing.