The Taliban Dilemma, the US and Pakistan 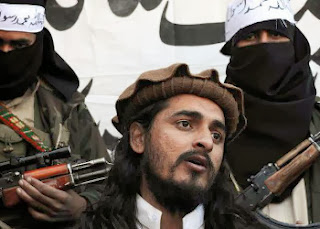 Did the US botch a Pakistan peace overture with the killing of the head of the local Taliban?

The Nov. 1 drone attack by the US that killed the leader of the Pakistani Talibanhe Tehrik-i-Taliban Pakistan’s leader, Hakimullah Mehsud, in a Nov.1 drone attack has paralyzed prospects for a ‘peaceful solution’ to Pakistan’s continuing terrorism and violence and has to be regarded as a major blunder stemming from lack of communication and distrust between the two countries.
Worse, the killing of Mehsud, who had expressed at least some inclination to start a dialogue with the Pakistan government for normalization, has allowed for his replacement by Mullah Fazllulah, who has vowed never to negotiate with Pakistan. He is the hardliner who ordered the attempt to kill the schoolgirl Malala Yousafzai, turning her into a world figure after she survived being shot in the head.

To the utter dismay of the government in Islamabad, the US once again has played its part in bringing the whole process of dialogue, however fragile it was, to a dead end. Not only does it reflect lack of cooperation and coordination between Pakistan and the US authorities, but also the markedly different visions and priorities they have of the region’s future.

The particular timing of the attack has further added to the already brewing lava of intense suspicions in Pakistan over US intentions although the killing was and is still being followed by serious attempts on the part of Pakistani authorities to prevent the breakdown of the dialogue.
The killing has also led many to the conclusion that the US is not interested in helping to establish peace in Pakistan, at least until Pakistan helps the US to achieve its war objectives in Afghanistan.

The question of the Pakistani Taliban has thus become a very serious dilemma for the Pakistani authorities, the one which demands serious political and strategic maneuvering both at the national and international levels.

One thing is becoming increasingly clear in Pakistan with every passing day – that the incumbent government is serious in a reaching a compromise with the Pakistani Taliban, perhaps because the ruling business-oriented party, the Pakistan Muslim League, has rightly realized the crucial importance of establishing peace as a prerequisite for making Pakistan an attractive place for foreign direct investment. The first thing the government had to do was to dissociate itself from this particular attack in order to maintain its credibility vis-à-vis the Pakistani Taliban, leading the interior minister to declare the attack an “ambush of peace talks.”

On the other hand, the provincial government of Khyber Pakhutnkwa Province, the most troubled and terrorist-hit province of Pakistan, also declared its intention to stop the flow of NATO/ISAF supplies through areas under its jurisdiction.

The disagreement between the troubled Khyber Pakhtunkhwa Provincial government, formerly known as the of Pakistan Tehreek-e-Insaf, or the Pakistan Movement for Justice, and the central government of the Pakistan Muslim League over the issue of NATO supplies against the backdrop of US withdrawal from Afghanistan in 2014 has further exacerbated the political environment in Pakistan, reinforcing the fact that terrorism in Pakistan is inevitably linked with the Afghan conflict.

While the wrapping up of the Afghan conflict is on fast track, a number of bilateral and multilateral events are in process with a single objective: to provide a face saving exit to the US forces. Most recent one was a trilateral meeting hosted by David Cameron, the UK prime minister, and participated by Prime Minister Nawaz Sharif and President Karzai. After this meeting, Prime Minister Nawaz Sharif announced in London that the dialogue process with the Pakistani Taliban had begun.

Significantly, Sharif’s statement came in response to Mehsud’s interview with the BBC in October, in which he declared his intentions to start serious negotiations with the Pakistani government. It is also significant to note that Islamabad, prior to Oct. 9, the date of the BBC interview, had not formally announced the initiation of talks or establishment of contact with the Pakistani Taliban. Not only did he invite the government to engage in dialogue, but also made it clear that for the ceasefire to be credible, “it is important that drone attacks are stopped.”

The Pakistani Taliban had placed some hope on the negotiation process, especially in light of the prime minister’s assurances to terminate air strikes on FATA territory after his October visit to the US. However, why did the US kill Mehsud right after the PM’s announcement of the initiation of talks? Nisar Ali Khan, the interior minister of Pakistan said in a press conference after the attack that the strike came just hours before a delegation was supposed to travel and initiate talks with the Pakistani Taliban.

The minister added that during bilateral interactions with the US, including with Secretary of State John Kerry, Pakistan had urged that drone strikes to be halted completely, especially during the peace talks. Thus it is difficult to believe the often repeated rhetoric that both the US and Pakistan are “closely cooperating” in curbing the menace of terrorism in the region.

Mehsud was one of the US’s most wanted terrorists, with a reward on his head of US$5 million. The Pentagon suspected him of arranging the attack on a NATO base in Afghanistan, of a botched car bombing in New York’s Times Square, and of terrorist attacks against Americans in Pakistan. Nonetheless, critics say the US is seeking to keep Pakistan in line with the policy objectives of the US, which is to ensure the orderly departure from Afghanistan, and a peace with the Pakistani Taliban would have got in the way of that.

Such views are not unfounded. For example, the killing of Wali-ur Rehman, the second in command to the Pakistani Taliban also came against the backdrop of a possible initiation of negotiations between the government and the Taliban. He too was killed in a drone attack by the US, on May 29, when the governments at the center and in provinces had just been formed after elections on May 11, 2013.

During elections, all parties in general emphasized the need for engaging with the Taliban in dialogue and find a peaceful solution. Rehman’s killing within weeks after elections had the effect of postponing the talks until Sharif’s statement of Oct. 31 in the UK.

The killing of Rehman and now Mehsud is most likely to have a similar effect, or even worse since the new Taliban leader, Mullah Fazllulah, happens to be a staunch enemy of the State of Pakistan. He is the man who established his control in the Swat Valley, among other things banning the attendance of girls in school. Malala Yousafzai was shot in the head and neck on Oct. 9, 2012 on his orders. She survived and has become a symbol of resistance to fundamentalism.

Mullah Fazllulah and his troops were eventually pushed out and forced to leave military operations in the region in 2009. Announcement of his appointment was immediately followed by an official statement by the Pakistani Taliban declaring that there would be no negotiations with the government of Pakistan since Mullah Fazllulah “is already against negotiations with Pakistan.”

The mess created after the attack has pushed the government of Pakistan to its limits. Its consequences can be very grave. One thing must be clear that one cannot hope to find solutions to such complicated problems as terrorism and insurgency merely by removing heads of such organizations and networks. And, considering the loose structure, vague ideology and motivation of the Pakistani Taliban, this strategy may not work. Such organizations are never short on leadership. Hence the killing of Hakeem may not affect the Taliban’s continuity in carrying out attacks. Therefore, the need is to take pragmatic steps to review counter-terrorism strategy in the light of Pakistan’s socio-political realities and review aspects of its relations with the US.

There is arguably no other way of dealing with terrorism than through dialogue. Pakistani authorities seem to have realized this, and their intention to go ahead with the dialogue process was reinforced in a statement by the foreign office which said that, “the government, however, is determined to continue with efforts to engage with the Pakistani to bring an end to the ongoing violence and make them a part of mainstream politics within the parameters of our constitution.”
The statement is very meaningful, not because of its content, but because of the agency through which it has been given i.e., the foreign office., giving the impression of having been specifically directed against the US’ calling the dialogue process a matter “internal” to Pakistan, and celebrating Hakeem’s death a victory of the US in the war against terrorism.

The dilemma for Pakistan is wide and open. Where it has to deal with the Pakistani Taliban, it has to handle the US as well. Lack of coordination between the US and Pakistan is becoming a major issue and a problem to be seriously reckoned with. However, how and the extent to which it would affect the approaching end-game in Afghanistan and Pakistan-US bilateral relations in that context is another question. But it is more than apparent that the damage to the Pakistan government’s efforts to establish peace with the Taliban has been done. ‘Asia Sentinel’