The ever-changing hues of Philippine politics 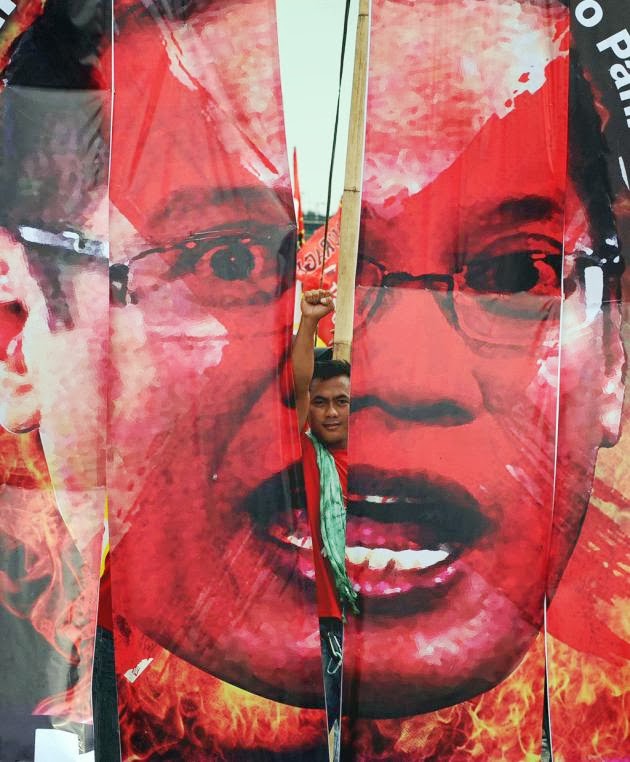 Red and yellow are also the dominant colours in our regional neighbour, but the scene might be on the verge of turning orange

Politics in the Philippines is a kaleidoscope of ever-changing colours that would shame a rainbow.

Politicians flutter from one party to another without regard for platform, programme or persuasion. The only thing that matters is votes.

That, however, has not stopped pundits - partly out of professional laziness - from painting Philippine politicians as either yellow or red.

The dichotomy is a throwback to the decades-long feud between two of the nation's most prominent families: the Aquinos and the Marcoses.

Yellow is the colour of the Aquinos, whose scion Benigno Aquino III is now president, and the politics they supposedly espouse: liberal and mostly backed by the educated middle class in urban centres, most of them in the capital region of Metro Manila.

Red, on the other hand, signifies the still-influential family of the late dictator Ferdinand Marcos. Their politics are considered conservative, and their main supporters are said to be poor voters in rural areas, largely in the northern part of the main island of Luzon that benefited from Marcos' populist public works programmes.

That palette is done with very broad strokes. While the Aquinos do have a loyal base among the middle class, they have also relied on the same political dynasties and land-owning families that have kept the Marcoses and their allies afloat all these years.

There used to be just one colour in Philippines politics - red, the hue of the grand old Nacionalista Party, the nation's first political outfit, founded in 1902.

When the Americans ceded sovereignty to the Philippines after the Second World War in 1946, the "liberal wing" of the Nacionalista Party spun itself into a new party, the Liberal Party, and painted its mantle in blue.

For over two decades, the presidency swung between red and blue. The Liberal Party held it from 1946 to 1953. The Nacionalista Party then ran the Philippines from 1953 to 1961, before the liberals again took the reins from 1961 to 1965.

In 1965, Marcos, unable to get the Liberal Party's endorsement, jumped ship and joined the Nacionalista Party, effortlessly turning his stripe from blue to red. He ran for president under the nationalists' banner and won in 1965 and was handed a second term in 1969.

In 1972, using a rising communist and Muslim insurgency as pretext, he declared martial law to circumvent a constitutional provision that limited his presidency to two terms and thus extend his reign indefinitely.

For nine years, he bathed the Philippines in red. With most of Marcos' enemies either in jail, exiled or dead, blue lost its prominence.

It would take a man's death in 1983 to break red's hegemony. That year, Marcos' political arch-enemy, the former senator Benigno "Ninoy" Aquino Jr, was assassinated as he stepped off a plane that took him from Boston to Manila.

Before he left Boston, Aquino had asked his family in Manila to tie yellow ribbons around the branches of trees that led to his home, a token gesture from the sentimental song "Tie A Yellow Ribbon Round The Old Oak Tree", one of his favourites.

Upon Aquino's death, a sea of yellow swept across the Philippines. Millions rallied across the country wearing yellow shirts, carrying yellow flags and banners, and blanketing the country in yellow ribbons.

That movement peaked in 1986, in the so-called Yellow Revolution of "People Power" - that forced Marcos to yield power to Aquino's widow, Corazon, and accept exile.

Since then, it has been a tug of war between red and yellow.

The Philippines was yellow from when Corazon Aquino began her historic term in 1986 till her successor, former Armed Forces chief Fidel Ramos, stepped down in 1998.

Red made a big comeback when the actor and local town mayor Joseph Estrada, a staunch Marcos ally, became president in 1998. Then he was forced to step down on charges of corruption and abuse of power in 2001 by the Aquinos' "yellow army" in what was billed as "People Power Revolution 2".

Gloria Arroyo, a Liberal Party standard-bearer, succeeded Estrada and for a time the Philippines swung back to yellow.

Arroyo, however, quickly lost her yellow supporters when she went back on a promise to not seek re-election. Ironically, she had to rely on the Nacionalista Party and their red base to narrowly escape a mutiny by a group of elite soldiers in 2003 and clinch a full six-year term in 2004.

Now, under Aquino, the Philippines is yellow country once more.

But the reality is that it is easier to get watercolour to stick on a fence on a rainy day.

A Filipino politician will always assume the colour that will best suit his needs at a given time. His loyalty is not to his political party, but to the cult of his own personality.

For instance, the man widely considered as front-runner in the 2016 presidential race and challenger to Aquino's Liberal Party used to be yellow himself.

Vice-President Jejomar Binay, who built his political career as mayor of the Philippines' premier financial district, had been a lawyer for both Aquino's father and mother. Now, he runs his own political party and champions a colour that is essentially a swirl of red and yellow.

If his ascent continues unabated, the Philippines could turn orange in 2016.
Raul Dancel The Straits Times