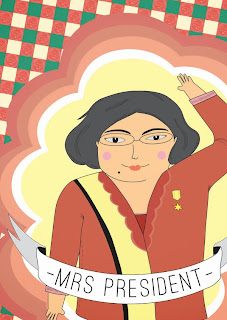 Speculation abounds over whether Indonesian Democratic Party of Struggle (PDI-P) chairwoman Megawati Soekarnoputri will run for president with Jakarta Governor Joko “Jokowi” Widodo as her running mate.  The discourse is now dividing the party into two camps — staunch Megawati supporters who prefer a party led by the Sukarno family, and those who opt for a younger breed of politicians pursuing reforms and modernization.

A Megawati nomination to run for president for the fourth time would likely put unfavorable pressure on the political climate in 2014.

The public would stop giving her and the party credit for paving the way for Jokowi’s rise. Rather than being revered as a kingmaker, Megawati would fall victim to the “King Lear syndrome”.

The King Lear syndrome is marked by decreasing positive characteristics, probably because of aging, with traits like autonomy and initiative becoming replaced with distrust, shame, guilt and inferiority. In William Shakespeare’s King Lear, the abdicated king asks his daughters — Goneril and Regan — to guard him with 100 knights. He insists there is no distinction between a ruling and an erstwhile king.

Her bow to pressures from the party’s hard-line supporters calling for her to run would be perceived as a failure to promote the party’s young cadres in races for national leadership. Indeed, the PDI-P has won people’s hearts thanks to its championing of young politicians such as Jokowi, Central Java Governor Ganjar Pranowo and Surabaya Mayor Tri Rismaharini.

In order for the party to successfully rejuvenate its leadership, Megawati should not run for president but rather encourage all her party’s best and brightest to compete in the country’s leadership changeover next year.

Not simply would Megawati be remembered as a charismatic figure in the party but also she would win the public’s respect if she put the greater national interest ahead of preserving the Sukarno family in the party.

Showing respect for the founding president means not merely establishing Sukarno’s dynasty in the PDI-P but by adopting his teachings.

Megawati could learn from King Lear and the behavioral change he undergoes when he realizes his own mistakes: “Pray do not mock me/ I am a very foolish fond old man/ Fourscore and upward, not an hour more nor less/ And, to deal plainly/ I fear I am not in my perfect mind…” (Act IV, Scene VII).

By admitting that he is a stupid old man in an imperfect situation, King Lear no longer perceives himself as superior over others — his own daughters and his advisor. Learning from King Lear’s self-awareness, Megawati could declare that she will let the party’s best talent take center stage in the presidential race.

The King Lear syndrome will further emerge if Megawati blames others, including members of her party, who do not believe that she is the perfect figure to lead the country and handle its complex problems.

In so doing, people will categorize her as a great person doing small things, as opposed to Jokowi’s brand as a small person doing great things.

Endorsing both Sukarnoist elements and those opposing Jokowi’s meteoric rise in the party could result in lost momentum for the PDI-P to win people’s hearts for the presidential election.

Jokowi’s towering fame is instrumental for severing ties with political oligarchs who rule the party.

Allowing the party’s top presidential candidate — not herself — to run would be her biggest gift to Indonesia’s political regeneration.