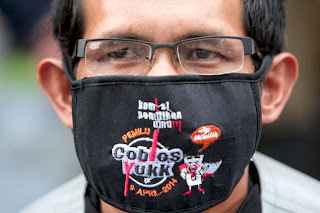 The presidential election will be here in just over seven months. We can expect all the hopefuls, with plenty of ammunition at their disposal, to compete fiercely in the coming polls. They will fight a heated battle with strong determination to get as many votes as possible and win the nation’s highest office.

What is at stake is not only their reputation as high-caliber politicians, as shown by their constant public exposure, but also the reputation of their parties: the Golkar Party, the Great Indonesia Movement Party (Gerindra), the Indonesian Democratic Party of Struggle (PDI-P), the Democratic Party and the People’s Conscience Party (Hanura) are some of the parties jockeying for space in print and electronic media.

Although there is already a clear sign of coalitions building, the public is still in the dark about who will actually be representing which parties.

Despite that, the parties will still throw their weight around by introducing into the battlefield their candidates in a way that reflects both the current sentiment of the public and the desires of their fellow party members. The presidential hopefuls will have to prove they can resist criticism from their competitors.

While the candidates themselves will definitely not engage in physical clashes, no such guarantee can be given about the behavior of their supporters at the grassroots level.

What the candidates need to do is come together and put in place the tools they need to wage “a war of ideas.” So what we will see perhaps is not the candidate’s hostility, but rational moves through which voters will align themselves.

There will definitely be a clash of concepts, visions, images and, perhaps particularly, the interpretation of them.

The respective candidates will not only be involved in the “Indonesian way” of debating, as we saw in the 2009 presidential election, but also in an advertising battle, which has already been taking place since the last quarter of 2013. These will essentially be about power and influence, just as actual wars over territory and material resources are.

The stakes will run high as we approach election day and the candidates begin to further expose themselves to those two categories of the war of ideas.

The latter is a serious matter for the presidential hopefuls. The stakes are high and the consequences of failure potentially severe, regardless of how little literal warring is actually involved.

That is exactly the play the public will actually witness in the election process.

The “war of ideas” may not matter too much for the candidates as it will only end after the official announcement of who will actually walk out as the winner of the contest.

What matters most and the main concern of the public at large will be whether the new leader of Indonesia can guarantee a smooth process toward a full-fledged democracy.

There are always reasons to expect that smooth political changes will help produce political stability and guarantee the continuation of economic development.

There have been cases where potential changes in leadership would have set off waves of uncertainty, apprehension and political turmoil.

A change in leadership can also be destabilizing when candidates lose their political battle at the ballot box, but cannot accept defeat, and mobilize their grassroots supporters against the winning and accepted leaders.

This could happen in our elections this year if political tensions continue to mount after the election period.

In other words, there is no guarantee that the new leader, whether it be Joko Widodo, Prabowo Subianto, Wiranto or perhaps even Megawati Soekarnoputri will follow the same path as their predecessor, Susilo Bambang Yudhoyono, who has seemingly planted the seeds of stability and democracy.

If their priorities seem to be on the home front, but the home front is in trouble, the leaders might become more nationalistic, thus ignoring the importance of the country’s foreign relations.

Reference has often been made to the thinking of Immanuel Kant (1724-1804) when one discusses the essential link between democracy and stability.

It is argued that democracy is one of the main components for a prosperous and stable region. But the democratic process in Indonesia in the post-election period can become a serious problem for the stability of the region unless the new leader has all the skills and commitments to carefully and properly manage the country’s political process.

All of the presidential hopefuls and their supporting political parties have yet to introduce to the public what they perceive as the main ingredients for a perpetuated democracy as envisioned in Kant’s thinking. They will not care what Kant’s thinking is all about, even if they know it.

But perhaps it may not be the right time for them to reveal the real ingredients for Indonesian democracy as they are still in the process of testing the public over the how well their candidates are received.

As the political process continues, the presidential hopefuls cannot keep avoiding the imperative to discuss with the public the importance of maintaining the spirit to move toward a full-fledged democracy.

That means the presidential hopefuls need to boost the country’s high degree of awareness that democratization requires hard work in promoting not only a sense of stability — domestically and regionally — but also corruption-free and transparent government.

Nation building may not be the main objective to be achieved through the election as the country’s 15 years of reformation have seemingly produced such an objective.

But to some, nation building is still a prerequisite in the democratization process if one is to avoid Indonesia becoming a failed state as religion, ethnicity and race sentiments continued to be manipulated by certain elements of society. Can post-election Indonesia prevent such a scenario and offer hope for a more stable country?

We may witness the new leaders in Jakarta, whoever they are, continue to move the political reform process toward a stable democratic order.

But that will be contingent on whether the new government will be able to have a full grip on the economy and can maintain investor confidence, enforce the law and eradicate corruption and nepotism within the bureaucracy.

The emergence of forces that backtrack and work against democracy must be prevented at all levels.

If the next government is able to manage those challenges successfully, then the prospect for Indonesia moving toward a full-fledged democracy would certainly be improved.

A stable, strong and democratic Indonesia would strengthen Indonesia’s already productive and effective leadership role in Southeast Asia, provided the new leader in Jakarta has a sense of strengthening Indonesia’s international position.

Conversely, an unstable Indonesia with its fragile democracy would make the national and regional security environment uncertain and even dangerous.

This would mean that while the countries in the Southeast Asian region highly value the strategic importance of Indonesia, failure in the democratic process could see Indonesia become a regional trouble spot.

For most countries in Southeast Asia, the still-overriding concern about Indonesia is perhaps not whether it is democratic or not, but how security and stability will be maintained in the country.

The issuance of a presidential instruction last year to tighten security may have been intended to anticipate and solve problems of domestic security disturbance that may result from the election.
The countries in the region will be very curious to see how Indonesia, under its new leader, will be able to balance its need for both democracy and stability. While the people of Indonesia yearn for democracy and aspire to be democratic, it is also true that it is not the panacea for all ills.

And in the end, the new government will need to identify security issues accurately and be effective in addressing them. The political situation before, during and after the 2014 elections will be a really testing time for the country.

It will have implications for social stability, territorial integrity, external relations, cultural cohesion and governance. Security risks resulting from the election process call for broad security measures to be taken.
Bantarto Bandoro is a senior lecturer at the School of Defense Strategy at the National Defense University in Jakarta