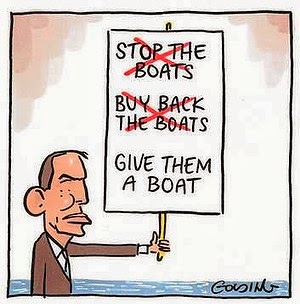 Asylum seekers intercepted on unseaworthy boats could be sent back to Indonesia on large, engine-powered lifeboats, in an escalation of the Abbott government’s turn-back policy.

Fairfax Media has learnt the government is buying up to 16 hard-hulled lifeboats – similar to those carried by cruiseships and oil tankers – to which asylum seekers can be transferred and returned to Indonesia if their own vessels are unseaworthy.

The revelations came as Indonesian police said Australia had turned back two asylum-seeker boats in recent weeks, prompting Jakarta to once again voice its condemnation of the policy.
Defence sources said the purchase of lifeboats was designed to thwart the tactic of using  rickety fishing vessels and sabotaging them at sea, leaving Australian border protection authorities no choice but to rescue them.

When a boat is intercepted, the asylum-seekers could be transferred on to the lifeboats close to Indonesian waters with enough fuel and supplies to reach land.

The high-visibility, engine-powered lifeboats, which have roofs, can carry dozens of passengers, and food and water for at least a week.

In a stand-off at sea in November, Indonesia refused to take back an asylum-seeker vessel on the grounds that it was unseaworthy.

Immigration Minister Scott Morrison refused to confirm or deny the purchase of the lifeboats, citing the need to "protect the security of our operations".

The Abbott government also maintained its silence over claims that Australia had turned back at least one asylum-seeker boat to Indonesia in recent weeks, in a move that could increase tensions.

A Defence source confirmed to Fairfax Media reports in the Indonesian press that a boat had been turned back. The source said the frigate HMAS Stuart carried out the turn-back in the past week.

The asylum seekers aboard the boat were given life jackets and communications equipment.
Indonesian Foreign Minister Marty Natalegawa, while refusing to comment on any turn-backs,  repeated Jakarta’s general condemnation of the policy on Tuesday.

"The policy itself, the so-called tow-back (policy) – let me put it once more on the record: our rejection of such policy is because it’s not a conducive and comprehensive solution to the issue," he said.

Indonesian water police told Fairfax Media that two boats had been turned back, one on Monday and one on December 19. The sources said a boat turned back on Monday carried 45 passengers, 36 male and nine female, mostly from Africa though with several from the Middle East. Another boat turned back just before Christmas carried 48 asylum seekers from Somalia, Sudan, Eritrea and Iran.

Both were found at Rote Island, Indonesia’s southernmost point.

Rote police chief Hidayat told Fairfax Media: "The asylum seekers’ boat was stranded near a small village called Lengu Tepu, around 4am yesterday ... They were rescued by the locals, because the boat engines were dead. The boat now is a wreckage, near some reefs."