Japan and America - Surrounded by sharks 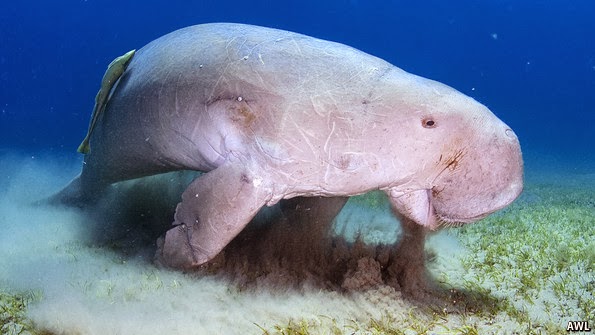 IT IS hard to imagine Osprey tilt-rotor aircraft landing in a deafening roar where, at the moment, beaches and a coral reef encircle subtropical waters and dugong, a rare kind of sea-cow, graze placidly. But building work for a vast new heliport for American marines could start soon at Henoko, on the eastern side of Okinawa, the main island of a chain that makes up Japan’s southernmost prefecture. At the end of 2013 Shinzo Abe, the prime minister, won legal permission from the prefecture’s governor, Hirokazu Nakaima, for landfill work to begin at the site.

Since Mr Abe took office in 2012, his government has lobbied officials on Okinawa, hoping to solve a problem that has plagued the country’s security alliance with the United States for 17 years. The islanders have long resented the fact that so many American soldiers are concentrated in their small territory. After the rape of a teenage girl by three marines in 1995, the United States agreed to shut its most unpopular base, called Futenma, as soon as an alternative runway could be built. The proposed site was Henoko, a rural area where the marines’ Camp Schwab stands.

Locals, including the prefectural government, later demanded that Futenma be shifted out of Okinawa entirely. America feared the eventual loss of its bases on the island, which are vital for its security policy in Asia. “We feel colonised by the American military presence,” says Kazuhiko Matsuda, a businessman in Nago near Henoko, though he admits that many people depend on money from the bases.

The impasse may end thanks to Mr Abe’s success in winning Mr Nakaima’s consent for a new runway in return for wads of government cash—last month he promised {Yen}300 billion ($2.9 billion) of investment a year for Okinawa until 2021. If so, few achievements by a Japanese prime minister would please the United States more. As tensions mount between Japan and China over islands in Okinawa prefecture known as the Senkakus in Japan (which administers them) and as the Diaoyus in China (which claims them), Okinawa’s strategic value has risen.

Progress on Futenma, however, coincided with Mr Abe’s decision to go to the Yasukuni shrine in Tokyo, on December 26th. The shrine, in Shinto lore, houses the spirits of 14 high-ranking war criminals along with those of 2.5m other war dead. The visit handed a public-relations coup to China, and vindicated South Korea’s decision to reject attempts to improve relations with Japan, which American diplomats had been working hard to sweeten. The United States declared itself “disappointed”. Mr Abe’s visit “raises questions about his views and intentions in the region and dents Japan’s diplomatic influence,” says Daniel Russel, assistant secretary for East Asia at the State Department.

Mr Abe seems to be calculating that other steps he is taking to strengthen the alliance with America will outweigh the impact of his visit to Yasukuni. He may be right. His decision last year to bring Japan into talks on the Trans-Pacific Partnership, an American-led effort to liberalise trade, impressed the United States. American policymakers also approve of his ambitious programme to revive Japan’s economy. Not long ago, they fretted that Japan’s tepid economic growth was making it a less useful strategic partner.

America’s Department of Defence remains solidly behind Mr Abe’s steps to overhaul Japan’s national-security architecture. It has long called for the country to loosen the constitutional and other restrictions that make its armed forces less effective. This year Japan’s government will seek to alter the interpretation of its pacifist constitution to allow “collective self-defence”. Such a change would allow Japan to come to the aid of allies, chiefly America, if they were attacked. It forms part of a coming revision of Japan’s and America’s defence co-operation guidelines which aims at bringing the two sides closer.

Still, there are limits. Michael Green of the Centre for Strategic and International Studies, a think-tank in Washington, DC, says relations are tricky between the White House and Mr Abe’s office, because each finds the other unpredictable. Japan’s government, like other Asian ones, worries about America’s commitment to the region, and in particular about the Obama administration’s willingness to come to the defence of the Senkaku islands in an emergency.

Japan is likely to take further steps to shore up its defence. Mr Abe’s government has said it will look at acquiring the ability to strike first at enemy missile-launch facilities. It would take such action in partnership with the United States, but the change would give Japan more clout inside the alliance.

For the moment, all eyes are on Henoko, where Mr Abe’s achievement could yet be undermined by local politics. On January 19th, an election for mayor of Nago could lead to the reappointment of Susumu Inamine, the incumbent and front-runner, who opposes the relocation. City regulations, he claims, would give him the power to block construction. Even if the pro-relocation candidate, Bunshin Suematsu, wins, protesters could make construction embarrassing for the central government. The Japanese-American alliance will remain hostage for a while longer to events on one little beach. ‘The Economist’