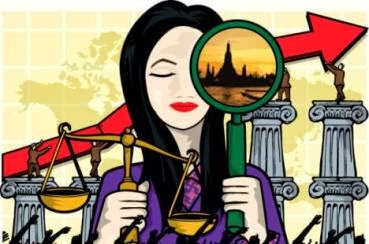 In a world economy with a clouded outlook, Indonesia impresses as one of the few bright spots, attracting investors and traders from the eight winds. Indonesia is increasingly a necessary part of any market portfolio for players with global aspirations, owing to a projected share of 3.4 per cent of world population by 2015, ascent to middle-income status (with GDP (PPP) per capita of almost US$5000 in 2012), and recent growth of 4–5 per cent per annum

Numerous other indicators suggest Indonesia may soon graduate to upper middle-income status. These include favourable demographics in a generally ageing East Asia, an increased per capita stock of human capital (defined as the product of health, education and entrepreneurship), positive experiences with open trade and investment policies, relative success in democratisation and decentralisation, substantial goodwill among friendly countries, and earnings from natural resources.

Yet caution is in order when dealing with prospects for long-term transition. Indonesia has experienced rapid growth more than just once, only to be disappointed when growth episodes ended in deep falls. The journey to upper-middle income status — and from there to the high-income world — is a very long one, strewn with barriers and concealed traps. The experiences of earlier champions like Japan, South Korea and now possibly China suggest that to reach the higher ranks of development an escape velocity — and no small degree of luck — is needed.

One critical constraint on Indonesia’s growth potential is geography. The popular belief in the natural richness of Indonesia is, after all, not shared by ecologists, who occasionally call the equatorial belt a fragile ‘Grand Canyon’. Scattered across thousands of islands, the Indonesian nation is a logistical nightmare, with high-speed maritime connectivity a far costlier connection than land and air routes. It is more expensive to transport North Sumatran oranges to Java, for example, than substitutes from China.

This scattered geography instills among many Indonesians an insular and ethnocentric mindset. Eighty-five years after the ‘Youth Oath of Unity’, ethnic dialects still thrive in government offices and ethnic natives frequently reestablish political privileges in their respective cities and towns. The phenomenon of fragmentation along cultural lines runs very deep in Indonesia, perennially affecting labour unions, the business community and civil society groups, who regularly fragment over the slightest disputes. In post-Suharto Indonesia, this has meant that party politics is fragmented into ‘dwarf minorities’ where the largest party typically enjoys only 20 per cent or so of the popular vote, making horse-trading a constant feature of policymaking and bold decisions politically unthinkable.

Additionally, the country’s resource endowment may yet be remembered as a resource curse too. Using foreign exchange as its unit of account, the resource sector is ‘naturally’ shielded from devaluation. As a result, the resource sector has attracted the lion’s share of Indonesia’s limited pool of entrepreneurs and professionals. But while the resource sector grows steadily the rest of the economy has been exposed to ‘Dutch disease’, with an expensive local currency inhibiting manufacturing development by driving up the cost of local exports and retarding economic transformation. With globalisation and contemporary society’s rapid rate of technological change, a strong resource sector is insufficient to pull an economy all the way to developed status.

Of equal concern as a barrier to long-term growth is Indonesia’s low stock of human capital. In this regard, Indonesia looks somewhat out of place in East Asia, having spent less on human capital accumulation than its neighbours. While the recent initiatives to raise the health and education budgets to a new level are heartening they are not panaceas — human capital accumulation initiatives take a long while to bear fruit. Raising the ability of an average Indonesian manual worker to that of a South Korean competitor — or increasing Indonesia’s Programme for International Student Assessment scores on science and mathematics from the current level of 371 to Shanghai’s level of 600 — is a decade-long undertaking. Much supplementary effort is then needed to translate human capital increases into higher productivity.

Finally, persistently bad institutions constitute a serious barrier to Indonesia’s long-term growth. These will also be difficult to deal with but less so than the barriers hidden in geography and culture. Of the countless institutions that are relevant to long-term growth, those dealing with positive-sum interactions — such as the bureaucracy, which mediates most business initiatives — are the most crucial. In contrast, the deeply rooted tendency towards fragmentation is a formidable zero-sum force, and the speed of growth risks being severely reduced when fragmentation combines with a weak and corrupt bureaucracy, as can be seen at present.

Political leadership is critical to overcoming the sticky barriers to long-term growth and avoiding the notorious middle-income trap. But followers are of equal importance too, as it is they who nurture shared commitments by organising themselves better.

To hold such a coalition together a rallying project is needed. By recognising Indonesia’s demographic quasi-constants and recent shifts in East Asia and the world economy more generally, ‘focussed-industrialisation’ of a few key metropolises with good connectivity to the world’s commercial centres and their own peripheries could be a strong way forward. Sustained success in such a program may allow Indonesia to reach an escape velocity and climb gradually nearer to the technological frontier where the most rewarding gains are contested.

Djisman Simanjuntak is Professor of Business Economics at Prasetiya Mulya Business School, Jakarta.
This article appeared in the most recent edition of the East Asia Forum Quarterly, ‘Indonesia’s choices’.