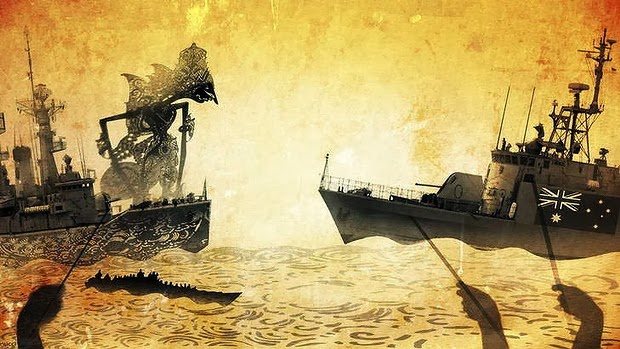 'Kiss me, Ketut'' is a popular phrase in my household. It's one of the most popular phrases to come out of advertising in a long time. Dripping with affectionate irony. It's also a feel-good story about the relationship between Australians and Indonesians

For the past 2½ years, insurance company AAMI has been spending millions of dollars on a campaign featuring Mandy McElhinney playing the loveable, boofy Rhonda and an Indonesian immigrant recruited in Melbourne, Kadek Mahardika, playing Ketut, the Balinese cocktail waiter. It's been a big win for AAMI and the ad agency, Badjar Ogilvy Melbourne. The sexual tension between Rhonda and Ketut culminated recently at Rhonda's high school reunion, where she falls into the arms of her high school crush, Trent Toogood, while talking about the benefits of AAMI's safe driver rewards.

In the great tradition of soaps, the last scene had an ashen-faced Ketut heartbroken in an empty hall. Australian public opinion rallied to the side of Ketut. Badjar Ogilvy followed up with an ad that suddenly had the hall full again and Rhonda falling into the arms of Ketut. Happy ending, as they say.

What the public response to this ad campaign says - along with the outpouring of support from the Australian government and public in 2004, when more than $1 billion was sent to aid Indonesia after a tsunami ravaged Sumatra, together with the robust numbers of Indonesian students coming to Australia and the robust number of Australians travelling to Bali - is that a natural goodwill exists between the two countries.

Two democracies, neighbours, trading partners, no strategic tensions, no history of war. Australians had plenty of reasons to forsake Bali after the bombings there in 2002, the Jakarta Marriott Hotel suicide attack in 2003, the Australian embassy bombing in 2004 and the second Bali bombings in 2005 but they have kept going.

On November 21, I used this column to blast Prime Minister Tony Abbott over his handling of the Snowden spy revelations, saying he had been insensitive to Indonesia. On November 25, I blasted him again, saying he could have made the controversy a diplomatic victory instead of a debacle. ''When Abbott spoke in Parliament I was thinking, 'No, this can't be happening','' I wrote.

Abbott was wrong then, even though he had nothing to do with the spying. But he is not wrong now. His government has quickly and successfully curbed the criminal smuggling operations from Indonesia, for which he has an emphatic election mandate. In this, the Indonesian navy has been almost invisible and its military ineffectual. Yet when an Australian navy vessel made a single, brief, unintended, inconsequential incursion into Indonesian waters, the Indonesian navy was mobilised as if it were a military threat.

Given all the events I have detailed above, this is towering hypocrisy. It proves that Jakarta has been largely indifferent to the systemic breaches of Australian waters by Indonesian boats, with Indonesian crews, from Indonesians ports. Its decision to militarise the ocean border with Australia over a minor breach is a triumph of jingoism and cynicism. It is no accident as Indonesia is in the midst of an election year and the government is still smarting from the Snowden spying revelations.

Indonesia's claim that Australian navy personnel may have tortured asylum seekers fits entirely with this cynicism. These claims are patently dubious given the long history of systematic deceit by those who employ people smugglers. Most of them have cynically destroyed their documents after reaching safety in Indonesia. There have been innumerable examples of self-harm and numerous cases of vessels being scuttled in open sea - brinkmanship of the highest order. Children have been deliberately placed at risk.

This latest example of unverifiable claims of torture follows this pattern. It is a variation on a theme. That the ABC should run with this story as if these claims of torture were credible is also a variation on a theme. It was the ABC that chose to damage Australia's relationship with Indonesia by publishing the Snowden spying leaks. It is the ABC that has a mother lode of form in portraying document-destroyers and ship-scuttlers as victims.

My support for the Royal Australian Navy does not, however, extend to its troubled procurement process. Last Monday, I argued it would be madness for the government to pursue a proposal left behind by the Rudd government for the biggest military infrastructure project undertaken in Australia by building a dozen submarines at a probable cost of more than $30 billion. We gave a right of reply to the chief executive of the Australian Submarine Corporation, Steve Ludlam, and the Chief of Navy, Vice Admiral Ray Griggs, also weighed in with a formal response. Frankly, I find their responses more alarming than my criticisms.

The head of ASC said not one word about costs, even though it was the whole point of the column. Griggs said: ''For most of the last two years, navy has continuously had four submarines in service.''

That means it took the navy almost 10 years to have four of its six submarines operational at the same time for extended periods; submarines delivered, on average, more than two years late, with years of numerous, well-reported teething problems, at a cost way over their projected budget.

We should not make this mistake again. We can't afford it.