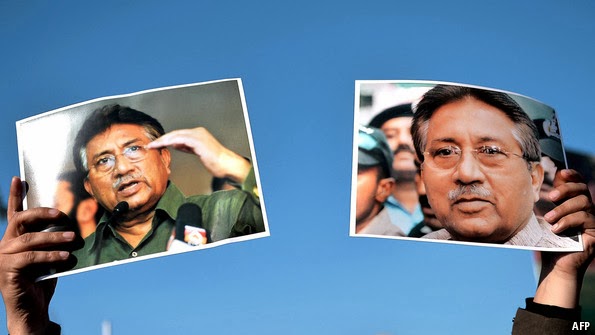 A former dictator prefers hospital to the law court

FOR the past month three judges, 20-odd lawyers and scores of journalists have assembled in the auditorium of Islamabad’s heavily defended National Library building. There, a special court has the task of deciding whether Pervez Musharraf, a former army chief who seized power in 1999 and ruled for eight years, is guilty of high treason. Yet the main player in the drama has remained defiantly absent.

Mr Musharraf rashly returned from self-imposed exile in London last year in hopes of contesting a general election. Almost immediately, charges began piling up against him and he was put under house arrest. Now a series of fortunate events have conspired to spare Mr Musharraf the indignity of appearing in the dock. On two mornings scheduled for court hearings, small bombs were found along the route from Mr Musharraf’s mansion in Islamabad’s suburbs. His lawyers argued that it was unsafe for him to leave home.

Then, on January 2nd, when Mr Musharraf was at last on his way to court, the former commando, who is fond of tweeting pictures of his morning workouts, suddenly diverted to the Armed Forces Institute of Cardiology and has remained there ever since. The general’s medical reports have been leaked. They show no sign of the heart attack his aides claimed he had suffered. Doctors who have read the notes say the 70-year-old appears to be in pretty good fettle.

Mr Musharraf seems desperate to avoid being indicted in court. Unlike some of the other cases against him, legal experts say he knows he cannot win this one. He is on trial not for seizing power in a coup but for suspending the constitution near the end of his rule in 2007. The Supreme Court has already declared that period of emergency rule to be illegal and unconstitutional.

Lacking decent legal arguments Mr Musharraf seems to be hoping that the prime minister, Nawaz Sharif, the man whom he ousted in 1999, will wish him good riddance and bundle him off to the United States, ostensibly for medical treatment. Yet Mr Sharif has not attempted to abort the trial, one which he had long promised. And although he is reluctant to pick an unnecessary fight with the army establishment, he seems determined to assert civilian supremacy over the armed forces.

The army has not done much to back their man either. It no longer wants to be seen interfering in politics or the judiciary. Generals are irritated that Mr Musharraf ignored their advice not to return to Pakistan last year. And Islamist officers loathe the man they say sold the country out when Pakistan joined America’s war on terror after September 11th 2001. All the same the army might balk at a conviction.

At one of the special court’s hearings, a lawyer for Mr Musharraf complained that the chilly auditorium was more fitting for a “Shakespearean drama” than a trial. With politicians, generals and judges all wary of breaking the logjam, right now it looks most like a farce.
The Economist